Before the update, you were able to control which attack class was going to be affected by the attack charge by putting it on top of the attack class list.
This allowed you, for example, to make the charge only affect cavalry. Since the charge is activated no matter what armor classes the attacked unit has, this meant that it was possible for the charge to be “wasted”, which wasn’t necessarily a bad thing though, and I don’t want that to be fixed tbh.

Since the new update, even if you put an attack class on top of the base melee class for instance, the charge will still be applied to the unit’s base melee attack class.

To see the “correct” behavior before the update, a developer has to do the following:

To see the behavior since the update, change the Pikeman’s attributes to the following (the same as in the old mod I provided) and place it in the same 2 combat test scenarios:

This however, works not as intended in the new update, and instead, the Charge seems to be applied to the unit’s Base Attack class at all times. 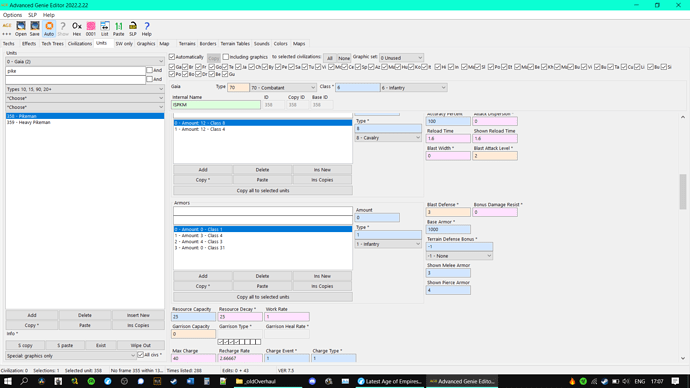 image1920×1080 97.3 KB
^ Relevant Pikeman stats in my updated mod version. Specific stats have changed, but the principle is the same.

Probably low, since not many people seem to use it like this anyway

This change is intended. Thank you for the report.

Since it’s intended, would it be possible to add a new flag which dictates which attack class the charge is applied to?

Actually, why intentionally remove interesting ways to use some mechanics? In no way could this have been required for some of the new changes to Charges in the update, and therefore, this should get fixed.