How are Aztecs not considered OP?
EKRs are dragoons on steroids and arrow knights can snipe your falcs from the whole map away.
How is Spain supposed to beat that?

What a empty post!!
Aztecs arent OP (about supremacy) because they lack the possibility to boom after their rush attack, being overpassed for other civs. Going to noble hut units from hut units is difficult to them. Also their economy needs a lot of cards to work properly.
About army, you shouldnt have any issue with skirmishers to kill both units. Also you can try with melee infantry, rodeleros are a good option thanks to their speed. That aztec units arent effective at melee. Finally remember that ERKs are counted by the same units as dragoons.

How is the weakest civ in the game not considered op? lol.

Aztec have a decent rush but no follow up, the warrior priest boom isn’t bad but it’s just worse than any other civs booms so they get out eco’d.
ERK are the best unit in the game probably but they don’t have the eco to really mass them, and usually if your rush failed its gg.

Spain can defend really well by going logistician for more resources and units quickly. Alternatively you have the strong spanish gold ff.

Man, Aztec are the worst civ of the game. You just don’t know how to counter them.

Try to play Aztecs and see how broken they are.

I think Spain posess a perfect unit combination to deal with Aztec army.

These two units will counter all Aztec army. Note that ERK is being countered by both Skirmisher and Rodelero. Moreover Skirmishers have 1.5 multiplier against Dragoon type units but 2.0 against ERK specifically.

Don’t worry if you lost to Aztec player. I can assure you that Spain has all tools needed to beat them. Just play a few games as Aztecs and you will know what to expect from them

Nha, I think the Iroquois are worse, at least the Aztecs have options, like WPs and a few very good farm and estate gathering upgrades. The iros have all the problems of the azzys, but with fewer eco cards.

Iro have cannons, cav and skirmisher. They are a more complete Civ compared to Aztec.

They’re eco is not that bad, their units are better cost effective. Aztec have no gold for late games and get wasted really easy.

Tbh, I disagree, for the lategame Aztecs have an economic tree far superior to the hauds. And in terms of military improvements, we could say that they are tied, for me the Aztec support shipments apart from being cheap are very good, the hauds are expensive and not very useful.

Explain it to me however you want, but I think only the Incas and the Lakotas, following closely, have such good letters of support. 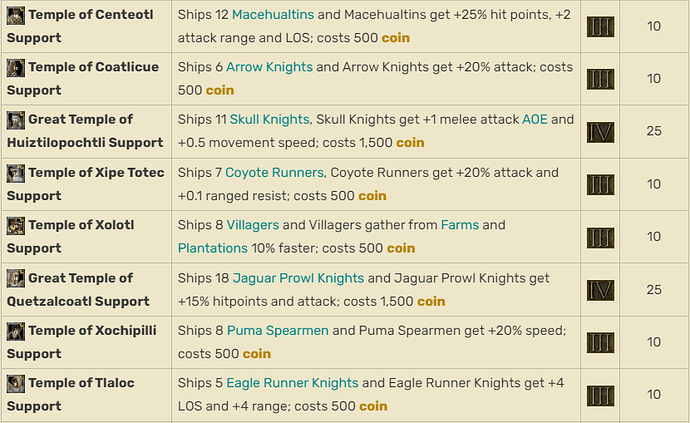 Forget this beautiful lady, what she offers is incredible.

Again gold for Aztecs is the hardest to get so 500/1500 gold per upgrate is huge for them. Not even Euro civs have in their arsenal that expensive upgrates, plus those are far better.

Iro basically wont need wood because they can spam buildings like crazy, they build them faster than you can destroy them. And not even talk about their Field gun, when they spam 10-15 of those they can obliterate almost everything from artillery to infantry.

When I play with azzys, I send this letter as soon as possible, and I no longer have many gold problems as long as I have gold mines available, the hauds apart from having only 2 cards that improve the collection of gold, they do not have much more. (Not to mention that you have to build a tribal market with 10 collection slots). The best thing about that card is that it makes its only units that cost wood, go to cost gold. Hauds also have 2 units that cost wood, but they do not have this card.
About cannons, I agree, they are very strong, but they are only available in industrial.
Final conclusion, the Aztec economy is much superior, in terms of long-term military strength, I would say that they are tied.

what she offers is incredible.

Incredible? All their council members do poorly for what they can offer.

Aztecs are mainly forced to go Age 4/5 with The Wise Woman if they want to have a decent late eco, basically, the lady is available for late-game same as field gun.

20 wood is ultra accessible, and 75 wood for cav they almost never use because other units are better cost-efficient.

Aztec economy is much superior

I would add to the conclusion Iro’s have a superior and better balanced army, so not much eco is needed.
You know, there’s a reason why Iros got hard nerfed and Aztec didn’t.

Well, the Tribal Council may already be your opinion, for me they are balanced, but the wise woman in late game offers very good improvements compared to the council members of other natives, for me, in my opinion, only the free Inca improvement the estate is that good. And regarding the army, I think they are tied, because the Aztecs have good improvements for their units, they have the SKN and the community plaza with 10 WP. I mean, I think they have several game options in the late game, that’s why it strikes me that they say they are weak. When I play a lategame with Aztecs, I feel much more comfortable and solid than when I get the same situation with Iroquois.
And the Iroquois suffered a lot of nerfs mainly due to their super rush in the early game, (curiously now the azzys did the same thing), that rush was comparable only with the current rush of Hausa tower. And well, to that we must add the rhetoric of the politically correct, which made them have to build a tribal market and lose all their lines of dialogue, making the experience of using this civilization sadder.
The Aztecs since DE came out was one of the most buffed civilizations in the game, they had more buffs than nerfs, and the Iroquois since the game came out, only had nerfs, the only buff was the discount on the cost of the tomahawk, instead, The Aztecs received several improvements in their lategame, that is, they only lost strength in their rush.

The Aztecs since DE came out was one of the most buffed civilizations in the game,

Alright, I’m gonna have to disagree with you there. Aztecs were unplayable until the eagle scout was introduced (almost 2 full months). They went from having a great Age 1 to basically not having one at all. Their Age 2 timing attack/rush has been nerfed, but no early economic buff to compensate.

and lose all their lines of dialogue

I completely agree with you here. Only 2 different voices and being so quiet just isn’t right.