Bank wagon age 1? or is this a cheat?

I was watch a game in spectator mode: snoopa vs EagleFootMan. (russians vs dutch).
i see full game and eaglefootman has on the end of game 6 banks but all with bank wagons. not 1 bank was make by vils or resources. but his first wagon was in age 1 thats normal not possibole right? so i was thinking and watch it back but the record games give a oos when he send his firts bank wagon. 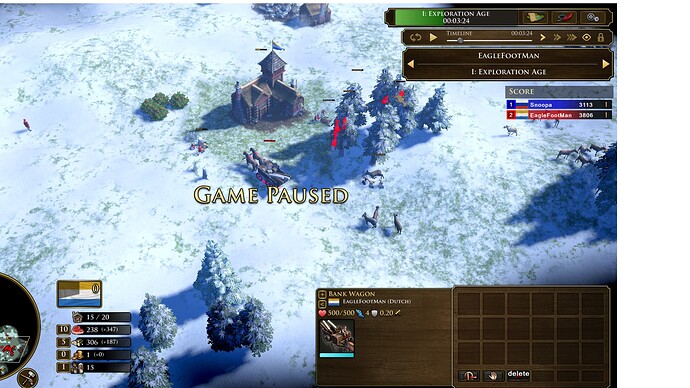 It gotta be a cheat, dutch only has 1 bank wagon shipment which is on age 2.

yes i hope this aoe3 de wil not be messed up by cheaters. in tad it was terrible…

I dont think so, this game have a lot of support from the devs. They have banned a few cheaters already and if this becomes a big problem they can always patch it later on.

I just tried to play the record game and it crashes my game saying that it out was out sync with the original. How would it even be possible to hack a match like this if the game is on a server?

Maybe its a record from the last version ?
They were using a mod ?

Heey @V1Nick1V, thanks for taking the time to write up a report! We’ll conduct our own investigation into this player.

they still play under the names h and iamgp!

Happened today, happened the day before yesterday and 5 days ago but I didn’t know what had happened until I read these posts here! Please do something about it. I have these players in Game reported too!

I played two games vs iamgp and his buddy the other day and gained a little insight as to how they’re hacking:

A buddy and I were vsing them for almost 30 minutes and just kept cleaning their armies (they are bad players), but at the end of the day we knew our fate rested in their hands. They just kept spawning stuff until we lost.

Hopeful it doesn’t become mainstream, these are the only two hackers I’ve found with 100% certainty.

Thank you devs for all you do looking into this, such a pain that people try to abuse every loophole they can find!