A game like this deserves many more effects. They should add blood but above all take idea from the game “COSSACKS” … many more troops by decreasing recruitment times and increasing population limits. 200 units are not enough, at least 1000 or 2500 are needed. so that you can really use the strategies and differences between one unit and another. What do you think?

More units might look cool but I don’t think it increases strategy. It also enhances the potential for zerg rushing/overwhelming with numbers and decreases the chances of reversing your opponent’s lead. It would make snowballing worse. I think it would make the game less strategic.

more units would mean an extra portion of the map occupied, being able to do more ambushes, put more archers on the walls or on the high points. or to be able to divide the knights so as to send a nice group on the archers and others on the units. I think the game would be more interesting

I’d say there’s a reason why non of the successful, competitive RTS ever had more units. It sounds interesting at first but the balance of things happening at the same time with potential additional strategic depth just doesn’t work out. There’s just a lot of sensory overflow but not a significant gain in strategic or tactical depth.

The importance of units and their difference is certainly more important when there are less units on the field. It also harbors the danger of removing the necessity to think about pop efficiency if the ceiling is too high. 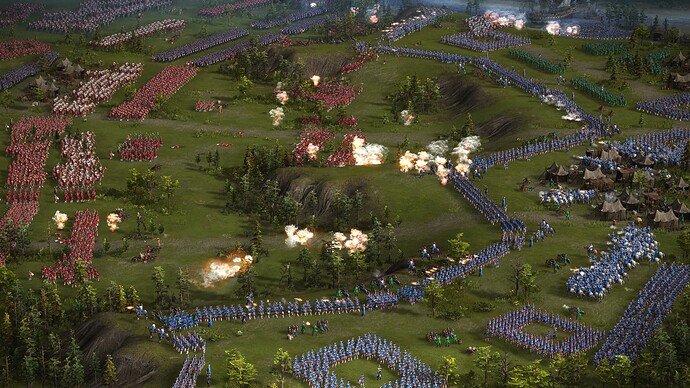 You are absolutely right my man.

any more effects. They should add blood but above all take idea from the game “COSSACKS” … many more troops by decreasing recruitment times and increasing population limits. 200 units are not enough, at least 1000 or 2500 are needed. so that you can really use the strategies and differences between one unit a

The problem would be that if you allow 300 population you will see players using 200 villagers, it would be the same…

I’d say 200-400 troops would be my preference. This is a game focused around microing and strategy, if there’s thousands it’s just a bunch of blobs of men. And I’m not even going to go on about performance.

Since the age restriction is 12. The blood cannot be applied in which is truly sad.
I enjoyed AOE 1 & 2 a lot just because of their decaying process and blood.
I loved to see the corpses on the battlefield because it told me a story of an enormous battle that happened a few moments ago.
It is a sad time because people are too sensitive and it would make it more difficult to survive if they face challenges xD

The decision to not allow blood effects in game was purely due to receive a lower age rating. So that it would be available for younger audiences. You cannot give an option to enable blood as that will negate the lower age rating.

Although I would love to have more realistic graphics instead of this cartoonish one which reminds me of aoeo.