Unit Icons are always blue regardless of type/player color. This is known since beta but no fix yet.

This song is still appropriate for the game. I have a villager and she is so blue

I have a villager and she is so blue

Exactly, I was thinking about this song.

I keep noticing this bug while watching casters and think that the players are able to see inside others’ garrisoned buildings because they’re showing as blue even though the player I am watching isn’t blue.

During a match today, the color of selected units were wrong during a portion of a game I played. Everything looked normal in dark and feudal age, but I think just as I reached castle age, I noticed that my selected archers and skirms showed up in blue in the bar below upon selection, whereas I was playing in red and the opponent was blue. I clicked or reselected a few times, but every time the color in the hud was blue. When the game was over, I returned from the statistics overview back to the map and found out that the issue was still there post-game. I took the following screenshot on post-game: 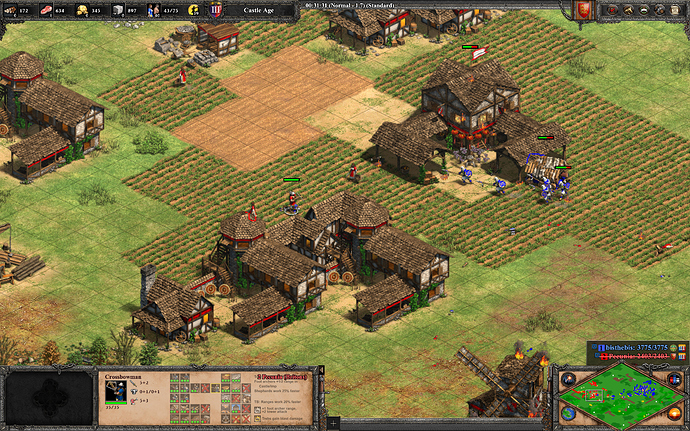 This game I also experienced a few speed rampings in which a few seconds of gameplay were squeezed into less than a second; a problem that started with the large January update for me. The startup screen directly before the game starts also took something like 20 seconds, showing the ready-checkmark next to only my name all the time. I know the speed ramping is a separate bug that might already be known, but I’ll just mention it because I can’t exclude that the color problem is linked to performance problems. In case it’s relevant: my internet is good and PC specs are recommended or better, except for my GTX750 GPU with 1 GB VRAM that runs at 100% usage in game.

But unit icons are always blue in DE. You haven’t noticed?

Game Version: Build (34793) Platform (Steam) Issue: Unit Icons are always blue regardless of type/player color. This is known since beta but no fix yet. Reproduction Steps: Start a game Click on a unit

This can’t be true, I just noticed it for the first time and it confused me, which it didn’t before. And even if, I would still prefer seeing each unit in the color of its civ, especially because you sometimes also click an enemy unit (to check his upgrades for example) and then you want to see it in their color.

Thanks for bringing this up! The unit icons will always be blue regardless of the player color. This was a design decision because a neutral color was harder to read.

It doesn’t sound like there is any plans to change this so I hope that it doesn’t cause too much confusion.

This was a design decision because a neutral color was harder to read.

I strongly recommend you to change this or give us an option. That will make it way better

What do you mean by neutral color? We want player color, at least as an option

This can’t be true, I just noticed it for the first time and it confused me, which it didn’t before.

Your eyes (I mean generally, not just you) sometimes trick you, but this was always there