Bombard towers have no attack bonus vs. rams (but bonus vice versa)

This is an obvious bug and easily reproducible:
Bombard towers have no attack bonus vs. rams, which definitely did not use to be the case, so basically they deal 1 damage per hit. There is no reason why this would be intentional, as bombard cannons (literally the same technology) deal serious bonus damage vs. rams. Bombard towers always have been and should be a direct counter to rams and there is no gameplay or realistic reason why it should be otherwise - rams are already too powerful for how easy and stupid to use they are, bombard towers are very expensive and should not be weaker than skirmishers against wooden boxes. This creates a massive gameplay inconsistency and a balance issue in favour of stupid aggression.

Also, rams have bonus damage vs. bombard cannons which is also unrealistic and makes absolutely no gameplay sense (seeing AI rush bombard cannons with rams in historical campaigns looks like directly out of Monty Python), and should be removed.

There is no reason why this would be intentional,

This is an intentional balance change since AOC: 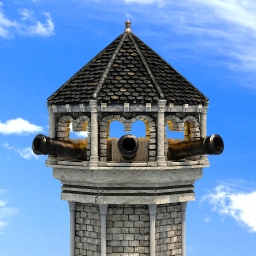 Well, that was a very different era and a clear oversight that needs to be fixed, as they are essentially the only good counter to many dumb rush tactics.

I think it is an intentional balance not justified because the bombard unit is very powerful against rams, but the bombard tower not. It is a contradiction.

They should remove this balance and restore the old behaviour just like the old version of AOE II before the definitive edition.

That’s not at all true, there’s plenty of ways to deal with a rush, and BBTs are not one of them. They were almost impossible to counter when they did melee damage, it’s much better this way.

Well, that was a very different era and a clear oversight that needs to be fixed

I personaly feel it is fine as it is now, as it gives more use to rams compared to trebs/bbc. And it makes civs with bbt+bbc less oppressive in the later stage of the game.

But the main point is: this is NOT a bug, it is an intended feature. Whether or not it is good or is debattable, but it should be discussed as a “balance change proposal” in the “Discussions” section and not in the “Bug” section.

I don’t mean only early rushing per se, just superaggressive playstyle focused on bumrushing and unit spamming. Bombard towers do pretty well against that, while if you use siege weapons in an actual strategic way, bombard towers pretty much just cost a bit of time. Right now they don’t even work for their most obvious purpose.

And all highly aggressive civs have alternatives to rams, and also the fact this would make it harder for them is not an argument as the game is already faster and more aggressive than it used to be.

Rams should have a limited use and should rely on support from other units/siege weapons. The simplest, most caveman siege unit imaginable should not be a solution to everything and it would still be expensive to build enough bombard towers to effectively counter rams. Why should you need to mix different defence types to have any chance at solid defence, but can just take down all defences with one dumb unit type?

It is a bug because it creates a giant illogical contradiction - rams are immune to towers using the same identical technology as siege units that wreck them. Intended or not, it’s a massive oversight and not an acceptable one for gameplay or very basic common sense realism. It’s like if swordsmen took 1 damage from hand cannoneers (the very unit designed to counter them) for no discernible reason.

I think you are a noob who once are attacked just hide in corner and spam towers. And you get destroyed by rams, and you are complaining. Am I right

What do you mean by “stupid aggression, dumb rush”? The game should be like this. It should favour aggressive play if not everyone turtles like you. If attacking has no reward, everyone who spam tower and only makes unit in imp with full upgrades will win. Boring. You should play treaty or deathmatch then

And if you say their dumb rush destroy your bombard tower, that is not a rush anymore. It is in imp already because bbt is only in imp. The opposite has given you plenty of time to boom and make army and only attack you in imp. That’s not rush

You clearly know nothing about the game and are just a “modern gaming” bandwagoner. Go back to your 1v1 Arabia, this thread is intended for people who actually know what AoE stands for.

If you’re not taking a standard ranked 1v1 outlook to balancing, don’t suggest changes that would mess up ranked 1v1, as that’s the most relevant gamemode for balancing.

I don’t care about ranked or multiplayer in general, the game is supposed to be balanced for everyone, and it has a massive legacy to respect. This is an obvious and ridiculous inconsistency that should be fixed.

I said “Almost impossible to counter”, with the treb specifically in mind. It’s ridiculous if there’s only 1 real viable counter, rams ensures there are two at least.

I don’t care about ranked or multiplayer in general

In your understanding AoE means sim city or cities skyline?

Oh you don’t play multiplayer? So you mean you got destroyed by AI rams and want a balance change just for you?

Try to push 15 bbt with trebs and see how slow the push is. Then noob players like you will survive the push. That’s unfair. Ram is much faster at pushing mass BBTs.

first, Arabia is the most played map.

Second, if bbt become effective vs rams then turk bbc + bbt comp would be a nightmare on closed map. And i’m pretty sure people dont want turk to shine more than they do on these kind of map.

Yes and they destroy them very slowly if there several of them since you’ll have to pack/unpacked trebs.

I don’t care about ranked or multiplayer in general, the game is supposed to be balanced for everyone

So you want to balance for everyone but dont give a damn about multiplayer, isnt that contradictory?