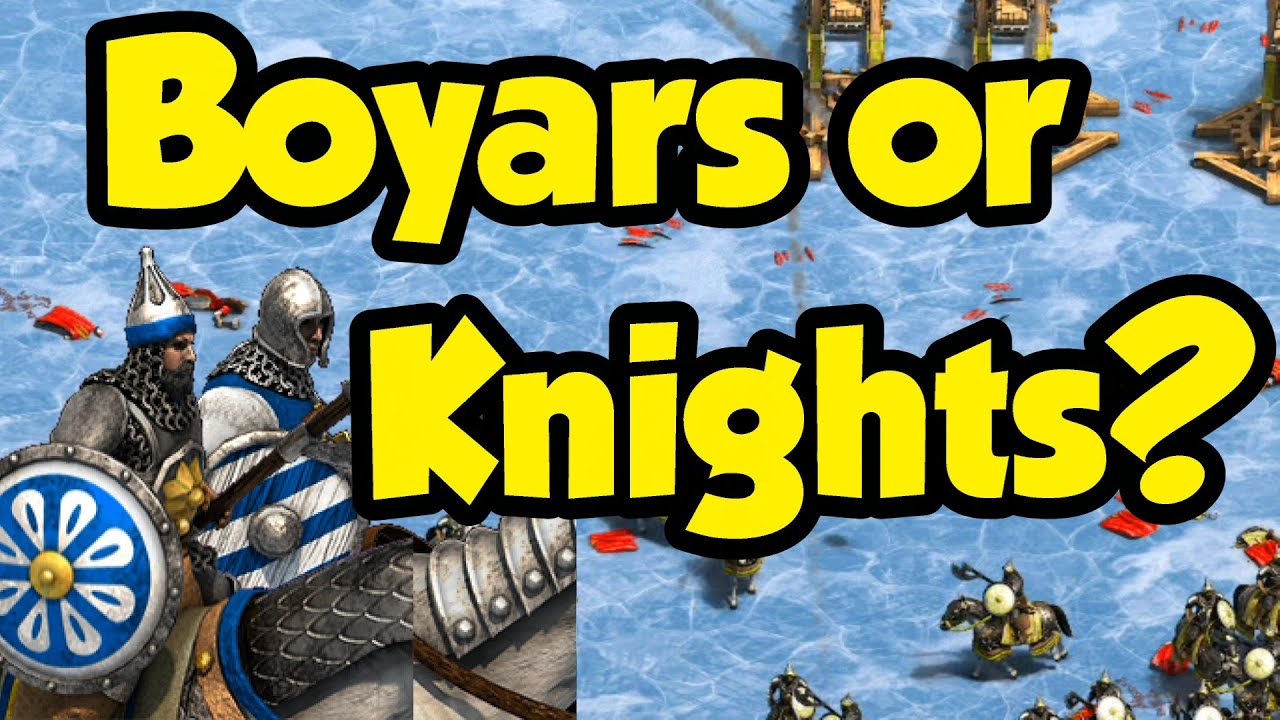 And die faster to Archer…

not that much faster, 50 shots instead of 60, still pretty tanky against archers by any standard.

I chose Magyar Huszars.
If you don’t have Huszars or Hussars. I think boyars better, I love their thick armour.

The answer to the question is Genoese Crossbowman.

I thought the lesson from the video was “Boyars and knights!”

(That is, you might as well make Boyars of you have a castle)

sure I try to switch to Boyar as Slavs whenever possible. But most times just better keep building knights and upgrading to cavaliers in open maps. Closed map Boyar is no brainer

Basically Boyards are superior in TGs, especially in the late game where you have castles and miss paladins.

In 1v1 imp, knights are still better imo, cheaper in gold. unless you are vs an opponent going pure knights.

In castle age (both 1v1 and TGs) it is way more difficult, since the castle is a huge investment, and you will be behind a pocket going knights…

It seems that the Boyar defeats all Paladins

As much as i like his videos he does seem to neglect key elements. I might have missed it but doesn’t he not even say archer and halb are better vs boyar. And doesn’t factor the production vs stables in his match ups. Like everyone would love to have an equal res of war eles vs knights but its just not feasible… Same for the boyar…

“Boyars or Knights?”
Both. Boyars vs. Knights is like Longbowman vs. Crossbowman, where it’s best to start with the fully upgraded generic unit and transition into the Elite unique unit if you have that much resource control. It’s as useful in 1v1’s as it is in team games. Though in practice most 1v1’s won’t last long enough to get to that transition, except for Black Forest type maps, and so Boyars are more common in team games.

Though this video undersells the power of Elite Boyars and will probably help many players with continuing to feel Elite Boyars need a buff. For example, omitting the difference in upgrade time between Cavalier + Elite Boyar vs. Cavalier + Paladin, which is 160 seconds vs. 270 seconds. Slavs upgrade to their “Paladin” almost 69% faster! That’s on top of costing 300 food and 150 gold less than comparable Paladin civs, which looks even better if you want to count the Boyar’s cheaper food cost and Slavs farming bonus. Arbalesters defeating Elite Boyars in 10 less shots than Paladin isn’t a catastrophic difference like the video makes it seem either, as that’s still more durability than the Cavalier, and Elite Boyars defeat Arbalester in 1 less hit than Cavalier like the Paladin. Lastly, the late game gold cost isn’t much different in practice despite costing more in theory. For example, including upgrade costs, 100 Cavalier + 100 Elite Boyar is 16,400 gold, and 200 Paladin is 16,050 gold, which is close to a difference of 5 Knights in gold. Even 200 Elite Boyar is 16,600 gold, which is a little more than a 7 Knight difference in gold vs. 200 Paladin. The meaning being, if the game is late enough for a player to spend that much gold, then a 1v1 game is close to running out of gold, or a team game is close to adding trade, and so gold mines stop mattering before Boyars cost significantly more gold than Knights.

Nevertheless I appreciate the suggestion of first mixing Knight and Boyar production. Replacing the 2 or 3 Stables other Knight civs would build while advancing to the Imperial Age with 1 Castle is probably the smoothest way to start the transition to full Elite Boyar. Just beware that this build is weaker vs. Arbalester than full Cavalier until full Elite Boyar. However against other Knight civs in the early Imperial Age, the build is about the same as full Cavalier due to the Castle Age Boyar being comparable to a generic Cavalier thanks to the extra melee armor.

They perform pretty much on the same level, dying to the same number of hits from pikes and archers to quote only them. Boyars being just slightly quicker and a bit better in few cases, but also harder to produce. In imp the Teutons Cav with +2 free melee armor are way more easier to commit, but weaker than E-Boyars of course.

In a way I like how the buff help Teutons, but Boyars just don’t really feel like an unique unit anymore

Technically yes, but will you be able to produce boyars at the same rate your enemy is producing paladins?