It has no multipliers vs infantry. 2 shots of its 75 attack won’t even be enough to kill 1 light infantry solider that has an upgrade. An unupgraded falconet does significantly more dmg with 300 per shot against infantry. Please give it a multiplier.

The tank is just an Easter egg put in the game in case you want to crown a victory in style. It was never intended to be an actual game changing unit. Think of it as a hot air balloon with an attack. If the thing is buffed, trust me, the outcry to remove it would explode. After all, the Leonardo tank was never a thing, it was just a cool concept that had no practical way of being useful in combat in its time.

Please don’t cater to those types of people. They are anti fun and don’t really make sense. There’s li’l bombards, imperial longbows, the sebastopol mortar which I dont think was ever fired or even mass produced, astronauts, my maltese explorer that can one shot 10 men, mariachis, and other ridiculous things that can be seen as easter egggs or memes and nobody bats an eyelash (the exception is the astronaut which people complained about but they didnt win). The tank does less dmg than an age II Mexican falconet. Actually it probably does less damage than some cavalry mercs lmao. There’s no excuse for that. Its just a game not everything needs to be historically accurate. It’s a cool unit and needs to be treated as such. It should be able to beat a skirmisher without struggling. It would take like 4 shots or something ridiculous to kill an upgraded musket. Buff the damn thing.

That’s the idea, no other civ has that kind of unit. With the other features added, would make the civ OP.

The idea is that it is not a meta game, since it is just a meme unit. (And I hope it stays that way XD).

The Sevastopol mortar was a functional weapon, although I don’t know if it was used by the Ethiopians. 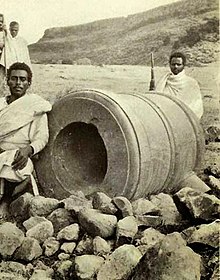 Sebastopol was the name of a large artillery mortar commissioned by the Ethiopian emperor Tewodros II. The name was taken from the Crimean town Sevastopol, the site of a battle during the Crimean War. The mortar weighed approximately 6.7 tons, and was capable of firing off half-ton artillery rounds. Tewodros, in an attempt to speed up industrialization in Ethiopia, took some British officials and German missionaries hostage to coerce technological help out of England. Instead the British governm...