I have noticed several Issues with Achievement tracking througout the Campaigns Saladin and Barbarossa:
Barbarossa: Captured only one Relic in first mission: “Holy Roman Emperor”, won by conquest. Achievement “Furor Teutonicus” was not unlocked.
Barbarossa: Converted 3 Villagers in Mission “Pope and Antipope”, trained around 20. Achievement “a Truly Holy Emperor” was unlocked.
Saladin: Defeatet every Opponent in the last Mission “The Lion and the Demon”, Achievement “Offense Is the Best Defense” not unlocked.
Unfortunately, I have only managed to get an ingame-Screenshot from the Saladin mission, since the replays end after 2h of ingame time and the other games were longer (and I didnt take screenshots, since I only decided to report this after it happened the third time).
Since I can only upload 1 Screenshot: the Achievements are seen on my Steam-Profile: https:steamcommunity.com/id/DerKaeptn 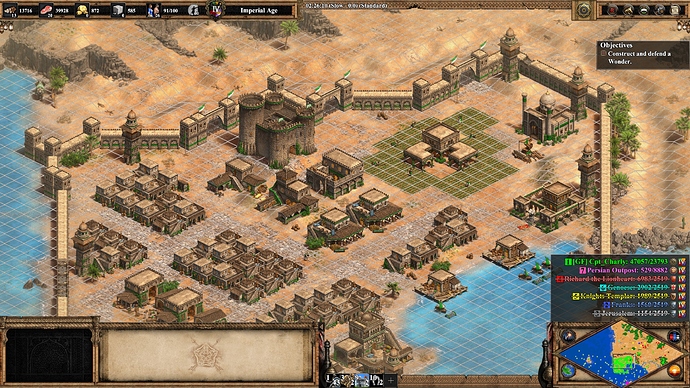 Play the missions I guess?

I hope, that these achievements will get fixed soon, because it can be heartbreaking to put so much work in and then discover, that you didn’t get deserved achievement

Maybe this solution for fixing Saladin achievement also works for other bugged achievements?

I also did not recieve the achievement after killing all enemies in
the first Barbarossa campaign.
I also killed the (grey) Cumans. Really seemed as if the victory
screen came way too fast. I don’t have a savepoint to test
other outcomes.

EDIT: so I did the campaign again and got the achievement with this
workaround. It is similar to the one found for the Saladin campaign.
Before you kill the last enemies, discover the grey Cuman army.
Make them your enemies in the diplomacy settings but let them live.
Now you can defeat all the other enemies that are left and the game
takes the time to give you the achievement.

The offense is the Best Defense is not awarded, when you beat “The Lion And The Demon” by defeating all enemies instead of building a wonder.

Before you kill the last enemies, discover the grey Cuman army.
Make them your enemies in the diplomacy settings but let them live.
Now you can defeat all the other enemies that are left and the game
takes the time to give you the achievement.

It is also possible to get the achievement if you never discover cumans. When I got the “Furor Teutonicus”, I got close enough to Cumans to have a german soldier warn me about their presence, but I never actually found them.

About the Achievement “a Truly Holy Emperor” . I noticed it today that i unlocked it. Played the scenario like a week ago. I had also converted and trained more villagers so i was confused as to why it unlocked the achievement.

But i think i figured out why. Midway i took a break, saved the game and some time later i loaded the save and continued. The thing is when u load a game, probably, you just start a new game with the positions of units/buildings and objectives that the game had when you saved. Steam just saw i started a game of “Pope and Antipope” and i completed it w/o any villager conversion (since i had done that prior the moment i loaded), so it unlocked the achievement.