Hey guys!
Wanted to bring some positivity and post something that isn’t just whining about the game.
So Ive seen that aoe4world has a build order generator. Click here to get there

Im far from being a pro(1250~elo), but I worked on this tight build order for the French:

I would say this build works great anywhere between 1000-1300 ELO, below that its too hard to pull off (requires alot of macro and micro management), above that its simply untested and perhaps obsolete.
This build offers you to get to feudal age and build a 2nd TC AND produce royal knights right away!
If you think your opponent is going for a fast castle, I think this build is the absolute counter to it. It allows you to start putting pressure at around 5:30 min while having a strong economy behind, which should snowball to a full push with production from 2 stables, 2tcs and an archery range at around 8min, just before they get to castle. That should finish them adn if not - you still have a stronger eco. Never lost a game against Rus or HRE with this build.
Ive seen a similar build doing it in 5:30, I offer half a minute discount, for the cost of a bit micro-managing and moving vils around.

A bump, just wondering if anyone also has a build to share

once building the 2nd tc with vills do you split the stonoe vills 2 food 2 gold? or where you swing those

I don’t know if it happens to you too, but it is only saved, with the English, not with the others

4 Straight to food actually! That allows you to keep production from both tcs and from the school of chivalry!
Keep making some vils to food afterwards from the 2nd TC, you’ll eventually need to have 6 on gold and 16 on food to be able to pace up to the next age while keeping production from all said buildings constantly. The extra vils can be sent anywhere to support any other production you may want, I recommend start adding wood and start thinking about the archery range & blacksmith. Good luck!

I don’t know if it happens to you too, but it is only saved, with the English, not with the others

It does for some reason :c. I just printscreen, hope its fixed soon

ya thats what i ended up doing to make it work thanks! , the only thing about the BO I would suggest it maybe writing “New Vill” like most do, just clarifies stuff a bit.

This is a great tool. Thanks for sharing.

If you wait till feudal to move the 3 vills from wood->food there is a bit of delay, i have been moving them as soon as i get 400 wood (enough for 2nd tc)

And you would be absolutely right to do so! It is what I do too, an inaccuracy I shall edit.
Another thing to note is stone miners should move back to food&gold as soon as you hit feudal with 300 stone(which should happen exactly at 5:00m if you follow the build, unlike wood which happens earlier) Also made time stamps of 20secs while french produce at 18sec, it doesn’t change the order tho

Sorry for the bump, but I have revised the build abit 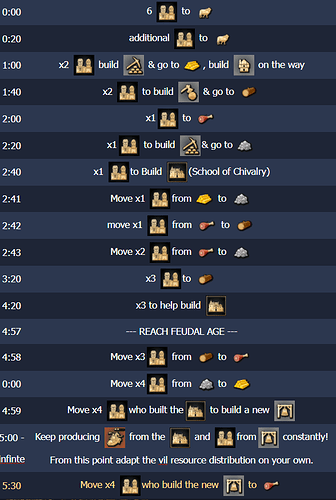