There are 3 civs now that speak lating or italian. Byzantines historically for the most part of their historical existence spoke Greek. The official language after the 7th century was greek. Latin were used in the beginning of the eastern roman empire mainly from the officials and military. Gradually latin language was not used since people (villagers) always used to speak greek and many officials were greeks. Not only greek was used mainly in byzantium but it was the aristocrates’ language in Rome as well. Most of important document were written in greek. What is today english was back then the greek language.

Finally, consindering that different languages of civ in the game make it more interesting and fun, it is a pitty that greek as a language (or even a distinct civilization) exist. From military to science ancient greeks were the cradle of western civilization. Historical battles, bravery, military inventions, strategic influence, history (as science), art, philosophy… they did everything, they started everything.

It’s a pitty to have a war game with civs spanning from dark age to imperial and not have greeks (hellenes) among them or some specific civ related to them. You made sicilians which were a mixture of italians and greeks (based on history again) and you don’t have Spartans or Athenians or Macedonians or Thebans. At least make the byzantines speak greek since you consider them greeks and historically greek language was mostly used in the byzantine empire.

Sources for the language issue

Byzantine Greek language, an archaic style of Greek that served as the language of administration and of most writing during the period of the Byzantine, or Eastern Roman, Empire until the fall of Constantinople to the Turks in 1453. During the Byzantine period the spoken language continued to develop without the archaizing tendencies of the written language. Byzantine Greek is still the liturgical language of the Greek Orthodox church.

Apart from the Imperial court, administration and military, the primary language used in the eastern Roman provinces even before the decline of the Western Empire was Greek, having been spoken in the region for centuries before Latin.[242] Following Rome’s conquest of the east its ‘Pax Romana’, inclusionist political practices and development of public infrastructure, facilitated the further spreading and entrenchment of the Greek language in the east. Indeed, early on in the life of the Roman Empire, Greek had become the common language of the Church, the language of scholarship and the arts, and to a large degree the lingua franca for trade between provinces and with other nations.[243] Greek for a time became diglossic with the spoken language, known as Koine (eventually evolving into Demotic Greek), used alongside an older written form (Attic Greek) until Koine won out as the spoken and written standard.[244]

The emperor Diocletian (r. 284–305) sought to renew the authority of Latin, making it the official language of the Roman administration also in the East, and the Greek expression ἡ κρατοῦσα διάλεκτος (hē kratousa dialektos) attests to the status of Latin as “the language of power.”[245] In the early 5th century, Greek gained equal status with Latin as the official language in the East and emperors gradually began to legislate in Greek rather than Latin starting with the reign of Leo I the Thracian in the 460s.[32] The last Eastern emperor to stress the importance of Latin was Justinian I (r. 527–565), whose Corpus Juris Civilis was written almost entirely in Latin. He may also have been the last native Latin-speaking emperor.[32]

The use of Latin as the language of administration persisted until the adoption of Greek as the sole official language by Heraclius in the 7th century. Scholarly Latin rapidly fell into disuse among the educated classes although the language continued to be at least a ceremonial part of the Empire’s culture for some time.[246] Additionally, Latin remained a minority language in the Empire, mainly on the Italian peninsula, along the Dalmatian coast and in the Balkans (specially in mountainous areas away from the coast), eventually developing into various Romance languages like Dalmatian or Romanian.[247]

Many other languages existed in the multi-ethnic Empire, and some of these were given limited official status in their provinces at various times.[248] Notably, by the beginning of the Middle Ages, Syriac had become more widely used by the educated classes in the far eastern provinces.[249] Similarly Coptic, Armenian, and Georgian became significant among the educated in their provinces.[250] Later foreign contacts made Old Church Slavic, Middle Persian, and Arabic important in the Empire and its sphere of influence.[251] There was a revival of Latin studies in the 10th century for the same reason and by the 11th century knowledge of Latin was no longer unusual at Constantinople.[252] There was widespread use of the Armenian and various Slavic languages, which became more pronounced in the border regions of the empire.[248]

Aside from these languages, since Constantinople was a prime trading center in the Mediterranean region and beyond, virtually every known language of the Middle Ages was spoken in the Empire at some time, even Chinese.[253] As the Empire entered its final decline, the Empire’s citizens became more culturally homogeneous and the Greek language became integral to their identity and religion.[254]

Byzantium and its languages

The two main official languages were Greek and Latin. Although Latin was the official language until the 7th century AD, it was never as popular as Greek, since the population of Eastern Roman empire was mostly Greek-speaking. Emperor Heraclius...

Even tho we love the game, it has several issues and problems.

The language spoke by Byzantines isn’t one of them.

It is an issue not a problem. It doesnt make the game disfunctional but misinformative. Read the sources.

While reading the wiki, I realized something rather amazing, there are actually 3 civs that speak Latin: Byzantines, Italians, and… British monks. Which when you think about it is a really nice touch, since in medieval times the official Church language was Latin.

Greek language for byzantines could work. Would be fun to hear medieval greek, it would better represent the civ.

A greek civ? Not in AOE2. The hellenes (Spartans, Athenians and the rest, belong to AOE 1 timeframe).

That’s just one of the numerous historical inaccuracies that have been putting me off in AoEII and something that I’m hoping to see fixed in AoEIV at least.

In fact, even before Greek officially replaced Latin as the language of the administration, it had always been the dominant one in the eastern half of the Mediterranean and subsequently of the Roman empire all the way since Alexander’s conquests.

Those regions were more or less making up the territorial and population core of the Byzantine empire of which cultural homogeneity increased in the later centuries.
So, even before the 7th century, it makes much more sense hearing villagers or soldiers speaking Greek rather than Latin.
I think the maps below can make this point clearer 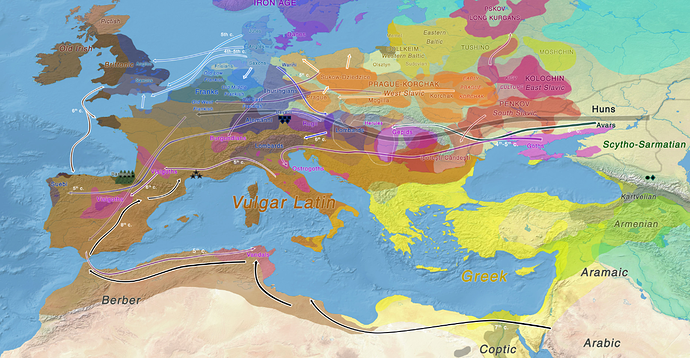 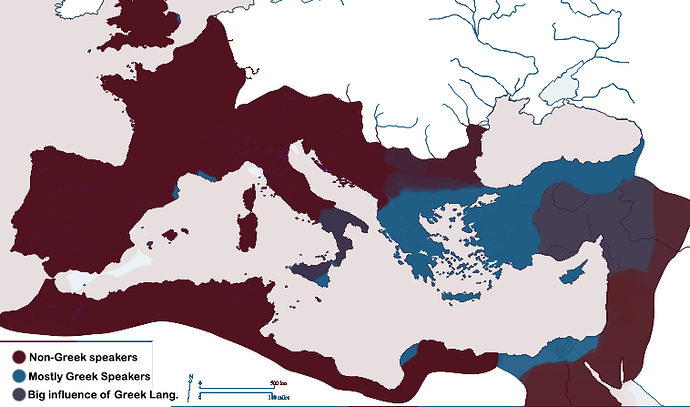 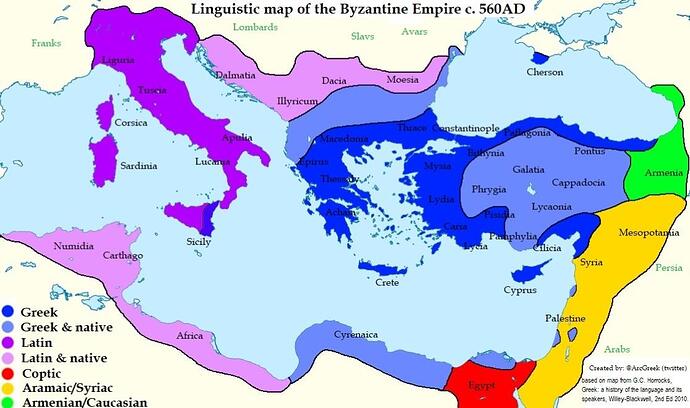 Byzantines are romans they are fine as they are.
Devs should focus on things that matter like bug fixes rather than waste time on fixing a 20 year old civilization voice lines.

Mahazona, it’s good to say your opinion but after you put some effort to follow the conversation. You probably didnt read any of the sources we posted. None said not to fix bugs, but adding more historical colour to the civs makes the game better.

Then aztecs goths huns should speak the languages they used as well.this is not historically accurate game anyway.

That’s just one of the numerous historical inaccuracies that have been putting me off in AoEII and something that I’m hoping to see fixed in AoEIV at least.

wait what?
There is people that actually don’t play because of “historical inaccuracies” in a video game?
I thought it was just a meme.

wait what?
There is people that actually don’t play because of “historical inaccuracies” in a video game?
I thought it was just a meme.

AoEII’s civ design just encompasses too many and too obvious fallacies to enjoy it as a historically themed game.
I could call several of AoEII’s civs as “A”,“B”,“C” etc instead of their historical names and still play them without noticing much of a difference.
Such is the extend of concessions that you have to make when you decide to add ~40 civs into it.

When a game is made in a thematic way, I expect its themes to make sense and maintain a minimum of correctness, notably when it comes down to history.
Or else I wouldn’t be here in the first place. There are other non-historical RTS franchises in the market that I could seek out and play.
That being said, I am glad that the series have moved on from such an outdated civ design ever since AoEII was released in 1999 and all the newer titles follow a different and much better approach.

Interesting topic. Well, they are actually right for using Latin for the Byzantines since it was the official language of the empire for many centuries. However Latin coexisted with Greek there and a change to medieval Greek may be more proper since the majority of the Eastern Romans were speaking Greek and other dialects of the Hellenic language. I would say it’s a minor issue to fix but still worth mentioning.

Ohh By the way Byzantines can not be only Greeks since they were a multicultural empire, Assyrians, Greeks, Latins, South Slavs, Armenians, Jews, Paphlagonians, Phrygians, Egyptians etc

Greeks were not called Byzantines back then neither Hellenes. The name of a medieval Greek was ‘‘Romios’’ and it actually means Roman. Since 1821 Greeks were calling each other like this (and their country Rhomanea, that means ‘‘the state of Romans’’) but then they made a swift focusing more on the ancient Greek heritage rather than their Roman past, changing their national name to Hellinas(Greek) instead of Romios(Roman).

Read the sources I posted please. Greek was the language of the byzantines, rather than latin, for more time and for much more people since the beginning of roman empire in the east. Most people there were Greeks since Romans occupied ancient Greece.

The defining traits of being considered one of the Rhomaioi were being an Orthodox Christian and more importantly speaking Greek, characteristics which had to be acquired by birth if one was not to be considered an allogenes or even a barbarian. ( Malatras, Christos (2011). “The Making of an Ethnic Group: The Romaioi in 12th–13th Century”. In K. A. Dimadis (ed.). Ταυτότητες στον ελληνικό κόσμο (από το 1204 έως σήμερα. Δ΄ Ευρωπαϊκό Συνέδριο Νεοελληνικών Σπουδών, Γρανάδα, 9–12 Σεπτεμβρίου 2010. Πρακτικά . 3 . Athens: European Association of Modern Greek Studies. pp. 419–430.)

Regarding the identity of byzantines many things played a crucial role. Orthodox christians despised the Greeks (ancient Greeks) because of their religion and their views. They hunted ancient greek culture but still…they used greek language.Byzantines considered themeselves romans citizen with greek ethnic identity. How couldn’t they? They were Greeks since Romans occupied them. They called themselves Rhōmaîoi which had the same meaning as “Greeks” even many years after the fall of byzantinte empire.

Byzantines in their majority were Greeks with other ethnic groups inhabit the empire as well and the main language they spole was greek. Check the sources above.

If there is Bulgarians, Turks, Persians, Slavs, Lithuanians etc., I expect Greeks to be there. Byzantines sounds just inconsistent but again, they had this strong empire with that name at the time where many civilizations were mostly hanging around in smaller tribes.