I was thinking on how can we make the camel rider even more fearsome through an upgrade, and I imagined a new unit model, being a mixture of the cataphract and the hoplite.

It would look something like this (except for the bow and arrow, of course): 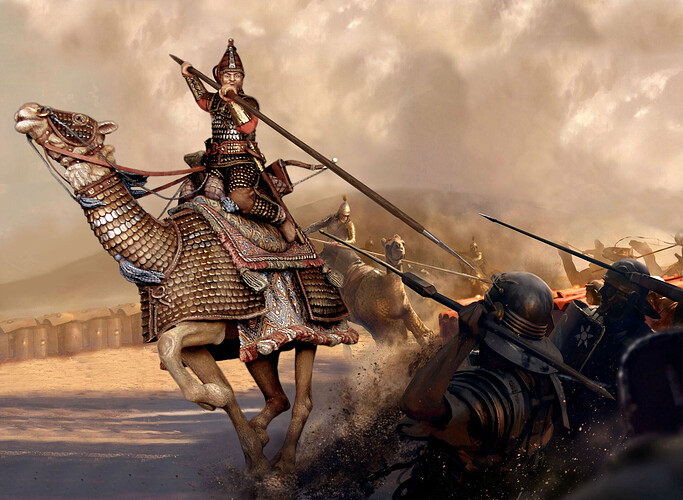 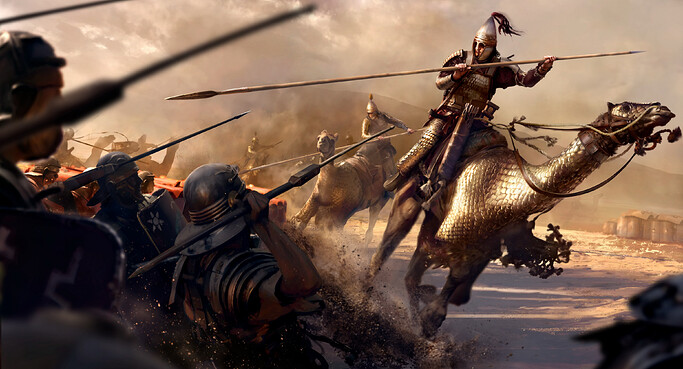 I woud like to see some new units like light cavalary ( scout upgrade ), heavy camel ( upgrade to camel ) and land trade unit.

And heavy slinger. Even in Imperial roman times slingers were used in battle. But after Tool age Slingers gets useles in AoE :c

I woud like to see some new units like light cavalary ( scout upgrade ), heavy camel ( upgrade to camel ) and land trade unit.

The first and the latter have been requested a lot if I recall correctly. I agree they would be a nice addition (and improvement) to the game

And heavy slinger. Even in Imperial roman times slingers were used in battle. But after Tool age Slingers gets useles in AoE :c

Yes, this would be interesting to see too. Slingers are pretty much useless after Tool Age, as you said.

I would do the opposite for camels in Iron age.

Attack bonus against cavalry needs to be big enough to win a 1v1 vs a Cataphract but only with a small margin.

Reason is that they should be able to hunt down enemy cavalry especially cavalry archers.
This unit should only be available to a few civilisations.

Those technologies should only be available to some civilisations that have bad archers.
Also they have very low HP and don’t benefit from armour upgrades so they are very week against cavalry. Cataphracts kill them in 1 hit.

I think Composite Bowman should get an Iron Age upgrade too:
Longbow:
+1 Range
+1 Attack
+5 HP
Maybe +2/+3 attack but lower rate of fire and same DPM than Composite.

Some other new units I would add in an Expansion:
Auxiliary bowman:
Iron Age upgrade to the simple Bowman (yes not Bronze Age)
stat’s are between Improved and Composite Bowman:
HP: 40 (Improved)
Attack: 5 (Composite)
Range: 5 (Bowman)
Only available to civilisations with normally bad archers.

New Axeman upgrades. Axeman do not benefit from shield upgrades anymore.
Improved Axeman:
Bronze Age
HP: 60
Attack: 7
No armour.
Not available to any civilisation that only has short sword without broad sword.

Heavy Axeman
HP: 80
Attack: 10
Melee Armour: 2
Only available to “barbarian” civilisations that don’t get all of the armour upgrades.

Fires very quick after walking.
Does benefit from shield upgrades because it’s carrying a shield.
No Iron Age upgrade.
Maybe no benefit from range upgrades.
Useful for civilisations like the Greeks to counter the now better archers.

For civilisations without Heavy cavalry or camel lancer. Maybe as an alternative upgrade to cavalry if that’s possible. Something like that wasn’t even done in AoE2.
Against archers this unit is as good as a heavy cavalry but it’s worse against everything else but it’s cheaper.