Can I call this corruption? Genesis tournament and interests

Here is a simple definition:

Now if you read bellow you will see that a bunch of people have been granted access to the game already and are already preparing, and most of them are going to participate in an open tourney upon launch where they have the chance to gain money. Now how do you call that?

I would like to add that part of these people are the same people who have been in this rather useless community council, and didn’t care enough for AoE4 to call the devs for a lack of UI selection box displaying individual units, keybindings and many of the game’s shortcomings that will doom it from being a worthy successor of the AoE name. But when it’s about money, then yes they are the first in line.

Good luck if you are not a shill and just wanted to join this tourney as well and have a fair chance for the prize, it’s already taken care of.

Here is the reddit link, which is in the process of being deleted by aoe4 reddit mods who, might I add, are also disingenuous and with their own agenda. But not to worry, I have captured an image of it too.

r/aoe4 - Should the Genesis tournament be delayed for a week in order to... 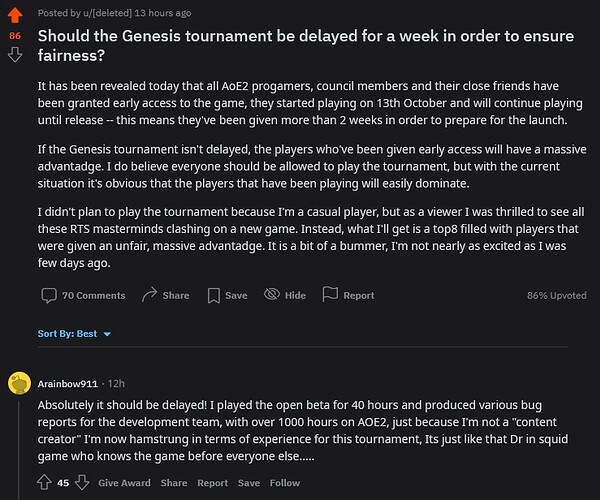 Many of you know me here, including some Relic stuff, I have been a long time contributor here from day 0 and supported the development process of this game and the people who are making this game. But I have grown more and more disappointed with how AoE4 has been handled, and I will not stand for unethical practices and disingenuity, and will call things for what they are. I will never be a shill.

For the admins of this tourney, if you read this, I would just cancel it altogether if I were you, it has 0 credibility now.

in the end it’s just unfair. The players have a great advantage with early access. That will affect the ladder and the tournament as well. There is nothing nice to talk about! Even smaller streamers and competitive players who have been waiting for the game for ages and want to start on the 28th are massively disadvantaged if streaming is allowed on the 25th. It’s very frustrating for me right now!

I’d say it is very unfair to give a selection of players earlier access with the tournament in mind.

On one hand I feel it’s more of an exhibition invitational tourney with the purpose of showing off the game and generate attention for it, w.r.t. other actual tourneys that are more about finding out who’s the best player. The timing of the tourney should give that away, it’s organised too early to have actual competitive value. Playtesters and council members are also allowed to participate as far as I know, and might have a slight edge as well.

On the other hand, it is still a tourney and the earlier access for these non-playtesters does ruin competitive integrity, which is a separate subject to the competitive value of the tourney.

Tourney aside, I still think it’s a bigger shame that “normal” players now see a select number of people get extra privileges for no apparent reason. You don’t have a valid reason to give 2 whole weeks of early access to provide 3 days of streaming “hype” just before release. If that rumour is correct I feel like that’s a big mistake by Relic by itself, notwithstanding any competitive influences.

W.r.t. the reddit thread, just because the account is deleted for some reason doesn’t mean the thread is in the process of being deleted. There’s nothing to gain for the moderators in doing that. I feel like that’s just a bit of an overreaction on the OP’s side.

Well is the tournament in any way connected to the developer? If not why should they alter their marketing practices before release because of that?

The tournament is a private initiative by EGCTV, with Microsoft as a secondary (small) sponsor.

I would just keep in mind that:

Obviously, for specific people to receive access ahead of others is an advantage, but do not insult the players who do not have access and rule them out - they will catch up swiftly. In the TST; TheMista, who had played AoE4 less than 24 hours, (but is an AoM / AoEO pro) was already taking games off a balance tester who had been playing for more than a year. The cream of the crop will rise, and a few days without the game isn’t going to prevent that.

EGCTV is independent of Microsoft and is not responsible for their marketing decisions.

Can I call this corruption?

No, you can’t. Unless the people granting access gain anything, personally, out of letting people play early and then winning the tournament, it is absolutely absurd to call this corruption.

Anyone getting angry at this is being completely absurd. It’s just a fun little launch tournament, that doesn’t cost anyone anything, if you feel that some of the players have an unfair advantage over you - don’t join. Wait for the next tournament.

For the admins of this tourney, if you read this, I would just cancel it altogether if I were you, it has 0 credibility now.

Absolutely zero credibility at this point.

Not really on Relics part tho, since it’s not their tournament and they never really had any.

Just make the tournament invite only and problem solved.

I think it just resonates with a big disappointment. of course the skill level will adjust quickly. Certainly no streamer with 0815 skill will win the tournament in the end. nevertheless, it is about the principle. You wait months, no years, for this game. Many guys take vacation and are mega hyped. and now you learn from the back that there are a lot of players with early access who are even allowed to stream earlier than the others. This is not fair and just makes the last few days of waiting seem unfair. Who like that? I don’t. And I’ve always been an advocate for the game and I can’t wait!

Please Drongo, spare me with your mental gymnastics on excusing and defending this practice and how it’s normal. This EGCTV organiser should not allow players who have early access to participate if it wants any credibility. As for Microsoft letting shills play the game earlier, do I even need to explain why this practice is unfair? I was expecting this from the likes of EA or Activision, but here we are having Age of Empires plagued by such low industry standards as well.

No, you can’t. Unless the people granting access gain anything, personally, out of letting people play early and then winning the tournament, it is absolutely absurd to call this corruption.

And it’s not about me joining the tournament, it’s about principles, integrity.

The cream of the crop will rise, and a few days without the game isn’t going to prevent that.

I bet if you weren’t in the closed beta you’d have a completely different take.

Anyway I’m not gonna watch that tournament because it’s irrelevant. I can always spectate beta testers if I want to check builds. I am shocked Microsoft didn’t forbid internal testers to participate, at least in early tournaments.

And it’s not about me joining the tournament, it’s about principles.

If my boss allows me to take a vacation for 2 weeks on the 28th, and I use that time to practice for the tournament then I will have a better chance of winning compared to someone who has to keep on working.

Is my boss guilty of corruption?

And again, it’s just fun tournament, it costs you nothing. Enjoy watching it and/or enjoy participating if you feel like it. If you don’t - wait for the next one.

What is your problem? It’s not as if you have to compete with them as an average pleb. It’s a limited list of pros, content creators and council members. Publicity for the game and a nice event for their audiences.

If anything, the high price money is strange since there is a high chance that the internal testers are much better at the game. Handing the money back to someone of the test crew seems odd and feels a bit like padding your own shoulders *insert obama medal meme
Something they could hand on to their audiences in case they win would seem much more engaging as an initial tournament reward (game keys and other goodies).

Many of you know me here, including some Relic stuff, I have been a long time contributor here from day 0 and supported the development process of this game and the people who are making this game.

I do know you by your posts, but this is not how I’d characterise them.

The price money is usually only a fraction of the cost for such an event.
20,000$ is not much money if you look at it from a business point of view.
The highest single prize is only 7,000$.

I can’t see the basis for any drama here.

Don’t overreact it’s just a video game in the end. And the tournament is on the 6 that’s 9 days u can still play the game and practice. U will see me get that top 8 to denie someone who had an advantage kappa

I’m not sure how much involvement Relic and Microsoft have with the event organizers. This is on the event organizers to decide how to proceed forward. As a potential viewer, it does concern me that there will be an imbalance between new players and veterans who had weeks practice prior. I’d rather see some fresh blood make it to the top, and redefine the pro scene.

A game with a small tight-knit pro scene is at risk of becoming dull, and a small but overly influential pro scene might steer the direction in unfavorable ways. I hope Relic and Microsoft realize this and don’t overly rely on veterans alone to sell the game.

they brought in notable community members to beta test the game prior to release, which I’d say is normal and to be expected. It’s up to the event organizers to adjust accordingly if they choose to do so.

On another note, however, it is concerning how close to release we are and the developers insist on continuing to be so secretive. Forbidding community beta testers from mentioning that they are involved at the very least, or at most streaming the game for the potential marketing and bringing in other RTS players to AoE4 is such a poor decision. They are creating barriers when they should be creating opportunities for us to talk about the game and spread the word through viral marketing.

The marketing for this game has been abysmal, and I feel like the lack of openness with their biggest stakeholder and disregard for sharing information is unfortunate. I really hope this is their only shortcoming and we’d be able to put this behind us once the game is out and is hopefully successful.