Can the 1v1 matching stop being that ridiculous?

1794 vs 2275?
What’s the point of playing this ridiculous ranked game?
If the top has no queue, let them wait, assign an opponent with almost 500 elo difference is really non-sense and meaningless. (and I checked the twitcher later, he just waited 7 mins only to have this game)

UPDATED
And during the discussion of others here, I am curious and dragged out my last 100 1v1 games.
The % showing a lower elo player win rate based on the elo difference.
The stat is not enough, but it’s defintely showing a rough relation between winrate and elo.
If anyone who knows to programme and do the better one this will be great.

After summarize this stuffs, I think it’s really important to improve the system of the matching.
Getting the balance between queue time and elo differrence.
We should even try to avoid having a 100 elo difference game as much as possible

One idea could be to add a parameter, a elo difference limit chosen by the players (between 100 and no limit). Someone may accept to play this game whereas other may not.

what’s wrong with this game?

I wish I can have it as well but clearly the devs wont allow that.

Low number of players at high elo at this time I guess, nothing matchmaking can due except longer queues in that case 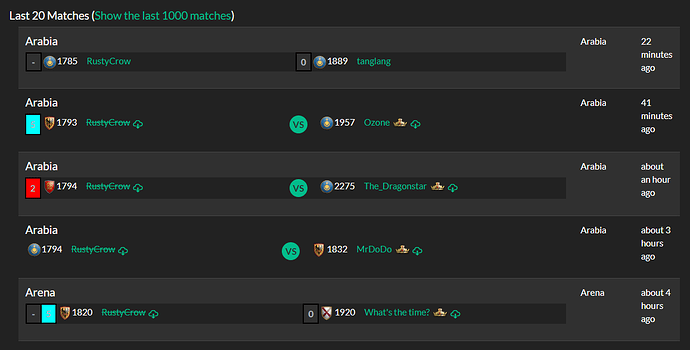 Giving me such matching in a row really frustrated

to me I would rather wait a longer queue not having a 1300, 1400 elo opponent assigned to me.
There’s no point to play such matches for both sides.

now 7 games in a row and out of 6 games the opponents elo are 100 higher than me
seriously?

a victim of your own success I guess

but yeah that sucks

I wonder if this is programmed as I always blaming the devs doing bad stuffs.
111

Your opponents sure do love Mongols and Burgundians.
Preemptively pick Berbers and destroy them!

Then you’ll get Indian enemy probably

I agree. This seems unfair to you. I hope you have better luck tomorrow.

I agree, players should have more controll over the balance between queue length and accurate matchmaking. Bad luck as well though, the majority of opponents you face should be lower ranked.

The Dragonstar matchup is especially hillarious. Stuff like that can be fun amongst friends but unacceptable in MM.

this should be fine for you. because of how elo works you will get much more elo if you win then you will lose if you lose. a large difference in elo is fine because of the reward you get if you actualy win.

will it be okay to you?

the way elo is designed yes. you should be able to beat a player 500 elo higher then you more then once in a hundred games. spirit of the laws video on elo explains it very well

do you get my point that it is meaningless to play games like this?
I am not playing ranked game because of the elo rating, I am playing this for a competitive game.
and I believe most of the players here expecting the same as well.

yea it can be very frustraiting ill give you that. im just pointing out that the elo system has a built in mechinism to midigate the effects of elo disparagy. the 500 point example is extreme but i regularly beat and lose to players 100-200 elo above or below myself

yes. sometimes, but we both know the win rate is much lower compare with vs a player 100 elo higher than you.

Especially I am currently at the peak stage and my opponents who above 100 elo than me, their highest rating usually around 2000, in those 8 games, my queue time are all within 2 mins, TBH, this is a really bad experience that no matter how hard I tried in the game, I can even feel the elo difference during the game just because they want to lower the higher elo players’s queue time.

Playing a ranked game which is unlikely to win, and a 7 games in a row having the same experience, is terribly bad.

i mean due to the nature of skill when you reach that high an elo their just isent that many players to choose from. i think this is not an issue of the matchmaking system but instead just a product of the extreme skill you are at combined with the relitvly small playerbase.