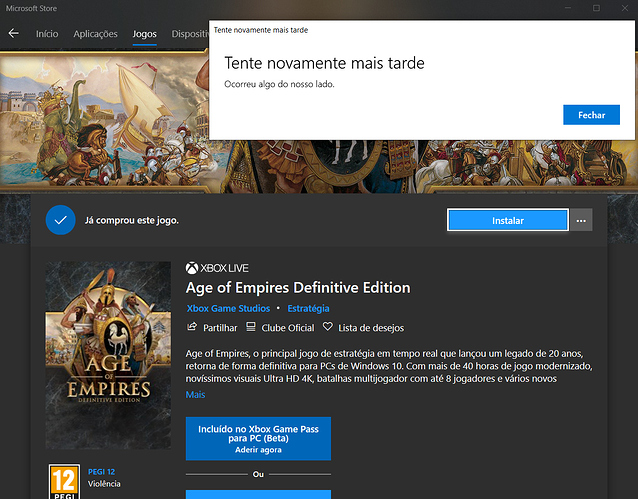 So pretty much whenever i try to download it, it shows me that screen which pretty much says : Try again later and Something happened from our side.

Did upgrading to Win 1903 let you finish the install? 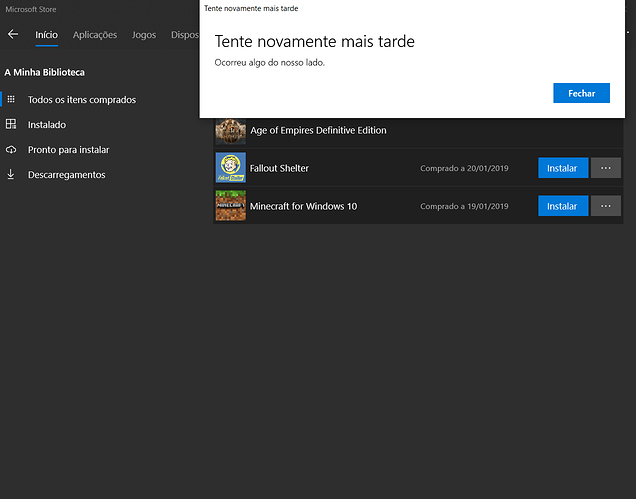 No i only tried downloading the game when i updated to 1903 first.
I don’t understand what exactly the error comes from.
I tried to reset the store cache, reinstall the store and god knows what else i tried and it still gives me the error as u can see from the image above.

Out of curiosity, do you have any other applications waiting to be updated in your download queue?

I’m having the same problem on the German Microsoft Store. And I know it can’t be a general issue, because I can install other apps and even the old AoE DE client without a hitch.

Been trying downloading the new clint for days now.

Not to my knowledge.
Whenever i go to the store i don’t have any notifications telling me of any update in queue.

I can download Fallout Shelter and Minecraft just fine aswell, it’s just this game that for some reason doesn’t feel like downloading.

Someone else solved this problem by first canceling all downloads in MS store queue, then using a local (or the built-in) administrator account to sign in and get all MS store and (left) Windows updates there first. After that reboot he repeated the same (get MS store updates) below his normal user account and managed to install the game.

On yesterday’s stream the community workers have informed the problem is known and hopefully a fix will be released by the end of this week.

You can visit the past stream as the question has been raised some times during the stream.

Ok…I have two PCs and I was able to download and play the new client on the second one just fine. Still not working on the first though.