The condottiero seems pretty weak at the moment considering you don’t have access to it until the imperial age. Would a good buff be to have it available in castle age?

That would be crazy. Infantry unit with 80 HP and not even being made in a castle. You have essentially a more costly version of a champion. Imagine a Goths’ ally being able to flood out these units in the early game. Or civilization that has a really good eco like the Persians just going all in castle age with Condottiero unit from their ally. You have a militia line unit that does not need any upgrades. As in from militia to champion.

It could be that only Italians can get it in Castle Age and it becomes a team unit for players who reach Imperial. That’s assuming that letting it be a Castle Age unit is a good idea, I’m just saying how it could be balanced for team play.

Yeah that seems like a decent idea. It would be way to strong like bomber said if all teammates got access to it in castle age. It might be too strong in castle age for italians but I’m not really sure how you can make it any stronger as it is supposed to counter a niche unit (gunpowder) which it doesn’t even do that well.

Sure, but give it a castle age version with less HP and attack, and free instant upgrade once you reach imp. Kind of like feudal → castle serjant.

This makes Italians more like an infantry civs? I agree Condos seems weak in imp currently. But Condos in Castle age is too strong.

Condos with weaker stats in Castle age seems lame as Italian knight-line is very solid. And it may be abused by infantry civ allies(malians condoskarl, goths, vikings and japanese)

Maybe +2 attack for only Italian Condos and therefore more useful in Early imperial.

Maybe just rework the whole unit then? There’s not even any historical reason as to why it counters gunpowder, in fact it’s the opposite as wiki says that their downfall was primarily due to gunpowder rendering their fighting style useless. They were mercenaries so maybe they could serve as an expensive alternative to the militia line? e.g. they only cost gold to make but when they kill a unit they return a certain amount of gold? Obviously more thought and considerations needed than that but just something I thought of.

Their shield and armor do really work against early musket bullet as they are ball-shaped and difficult to penetrate armor.

Seems fine to allow Condos in Castle Age IMO. Italians could use a moderate power spike on land maps in the mid game. It’s important to remember that these will not be Imperial Age condos, they will be lacking Plate Armor and Blast Furnace. They are a fairly gold heavy unit, and lose in combat to Berserks or Obuchs, as well as the obvious Samurai and Jaguars. Stat-wise they are not far from Woad Raiders, same attack and 1/0 armor instead of 0/1. Just the WR has more speed and the condo has more HP. They don’t get an elite upgrade, so the investment loses some momentum in the late game. This is similar to Inca slingers, a unique counter unit that is available from a standard military building starting in Castle Age.

If an opponent like Bohemians or Turks is massing gunpowder in Castle Age it would be nice to have a single response, instead of starting with Skirmishers then transitioning to infantry in Imp. It wouldn’t be great against Conquistadors given their speed.

It may be necessary to remove a water bonus in exchange for this land buff. I wouldn’t want every islands game to become Italians winning water early, then sneaking a barracks and spamming condos for the rest of the game.

I thought Condos have anti-gunpowder armor?

And because of that I don’t think it makes any sense to put an anti-gunpowder unit in castle age, really.

Hand canonneer has +10 bonus dmg against infantry. Condos negate this bonus damage only. They still receive 17 atk from HC and same amount of damage as other infantry from other gunpowder units.

Does someone know the current stats of condottiero? 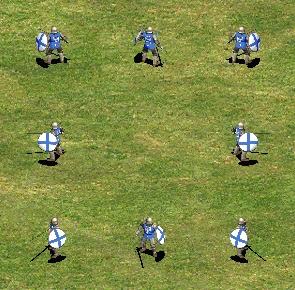 The Condottiero (plural Condottieri) is the second unique unit of the Italians in Age of Empires II HD: The Forgotten. A quick anti-gunpowder infantry unit, it can be trained at the Barracks upon reaching the Imperial Age. In The Forgotten, a Castle...

You could simply add some sort of italian bonus to make it special just for them. The idea of replacing the militia line is good imo as an alternative upgrade for Italians (similarly to winged hussar).

This might work because Italians are weak on land, but for other good infantry civs would be a mess.

Also this is not the real need of the civ…