I used a chain object and found a unit was able to pass through the small end cap despite there being no actual gap.

They also seem to be treated like an open gate by units, which causes some pathfinding problems. 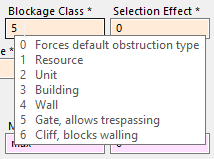 Chain objects are given the same Blockage class as gates, despite not being able to function as one. This perhaps means the pathfinding is informed that this is a gate, and not informed that it is locked.