I’ve recently played “Coming of the Huns” scenario in Definitive edition, and was surprised to see Huns depicted as… Yamato! 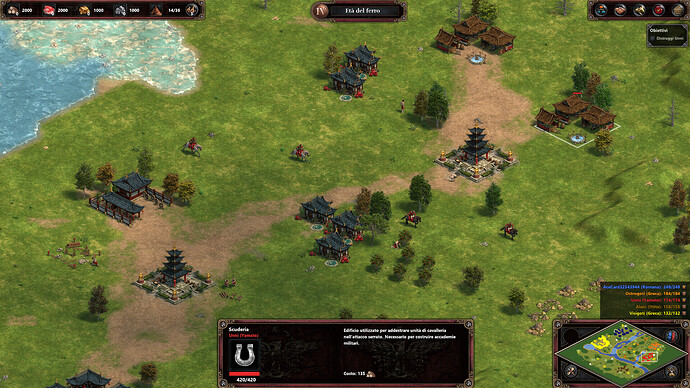 This could be an opportunity: in some scenarios from Rise of Rome legacy expansion, all “barbarian” civilizations (Gauls in “The Siege of Alesia”, Britons in “Invasion of Britain”, Goths and Huns in “Coming of the Huns”), are missing, so they had been depicted with “placeholders”, which fit only in part.

Why not adding Britons, Gauls, Goths and Huns as proper civilizations?

If you want the basic answer, AOE DE is a remake of AOE:ROR and AOE1. And AOE:ROR, which had that mission, is an add-on/expansion to AOE1, which was basically a clash of civilizations game that led up to the Roman times. So the basic idea of AOE1 was civilizations like Greece v. Egypt, with Rome being more of an afterthought epilogue (although quite long actually). Germans and Celts were neither an empire like Greece nor were they a player in the time frame AOE1 was developed for.

More in strategic terms, the problem with making the Gauls and Germans as civilizations is that they were not really on the same par in terms of civilization as Rome until like the 5th century when the AOE2 game describes events. I don’t know if you are familiar with the Roman suppression of Boudica’s revolt, but the Roman forces (just one or two legions) wiped out far larger numbers of Briton warriors and civilians, sadly. There was a famous battle where Boudica had far more soldiers and got killed.

You can make the argument I think that for aesthetic purposes you would want to have a barbarian set of architecture for these missions, and I sympathize with you. You are right that the Chinese architecture doesn’t really do it here. Plus, someone can also make the argument that there was some kind of Western European non-Roman “civilization” in Roman times. It’s just that in terms of power they are more relegated to the AOE2 medieval period.

If they make a separate Barbarian Civ, then people will want to play it and maybe be disappointed if they don’t find it very balanced against Rome. Historically, the Barbarians were not a match for Rome, generally speaking, until the AOE2 period. I don’t want to overstate the case though. I believe that the Celts conquered northern Italy or even Rome itself at one point before Caesar’s time. And Rome made a strategic decision not to conquer all Germania after they got some defeats there.

Well, I anticipate that this will not happen. The game is almost three years old, and there are still models missing, such as the cheat units, and others missing. There has been no bug fix update for more than 6 months, the game is abandoned by the developers.

As for the authentication of Germanic tribes as playable civilizations, that discussion has already been had many times, and if there was a DLC there is no reason not to include them. Personally, I would love new civs with Germanic architecture.

To say that they were not relevant is incongruous when we have Palmyra as a civ, a city elevated to the level of kingdom and lasted 9 years independent of Rome. Other civs, such as Sumeria, which is very far from the rest in time, or Minoans, very old and not very relevant. “Shang” does not make any sense, and Yamato was not a civilization but a period that we cannot consider ancient age.

I realized later why in the Huns mission, the Huns were presented with Asian architecture. Historically, the Huns were actually a nomadic Asian people from central Asia. About this same period, the “White Huns” also invaded India from the north.

If I recall correctly, in AOE:ROR (original), the Huns were depicted with Mesopotamian architecture instead.

So it seems that ideally the Huns would be given some kind of Asian nomadic architecture. But barring, that, the Asian architecture style seems a good choice.

In AOE2, the Huns are depicted as having European architecture, and really the main thing that brings to mind the Asianness of the Huns is their Tarkan units.

Also in no small part because Yamato has cheaper cavalry and horse archer units and Huns being a riding civilization that fits well.

It’s true, but building style is really weird, it’s too much “Japanese”; if Huns are a nomadic civilization, their buildings should be tents and huts. More generally, if there’s a “Mesopotamian” building set, a “Greek” building set, and so on, why not creating a “nomadic” building set, which could fit better?

This is solved very easy. They should keep Yamato civ due to the Asian origin and the cavalry bonus, but their houses should have the Tool Age model, and the rest of their buildings should have their Bronze Age model, just for visual purposes, but being in the Iron Age. Also they should not build Academy or Workshop.

Why not adding Britons, Gauls, Goths and Huns as proper civilizations?

Trust me, it has been since the release of aoe1de that we asked for new civs, and this was the only aoe (including mythology) that hasn’t received new civs since the original game was released.

There are also a ton of other things (like formations for military units or garrison meccanics) that were asked for aoe1 and were never implemented, so I wouldn’t get my hopes up…

Yes, but only unit statistics fit… seeing Japan invading Rome is so weird.

I did a recreation of the Hun settlement, with Bronze and Tool buildings. Imagine that they are in the Iron Age with all their upgrades but their buildings are still Bronze-Tool. I think it doesn’t look too bad. 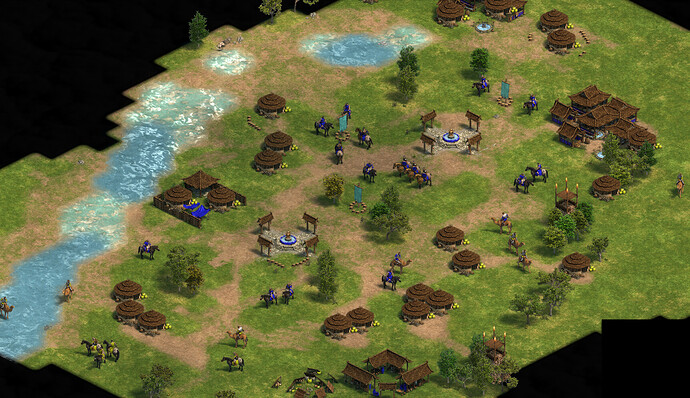 and mongolian voice of the units.

Yes, it could be a good “nomad-Asian” style.