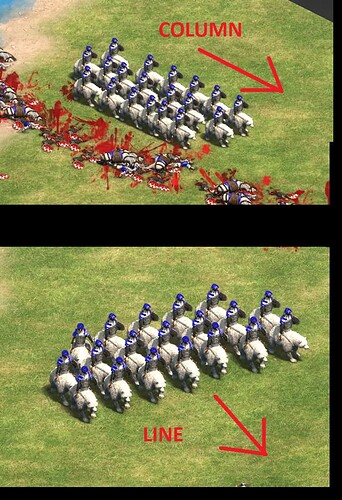 As much as people might not like it, but this is similar to how aoe4 works, except line formation is a more spread out line(because column is basically worthless), and “no formation” is a compact block of lines. We keep the column formation for the people that would ever want to use it (im assuming SP)

To explain it: someone trains 20 knights. They dont change or set a formation, so the 20 knights will work in line formation ALWAYS, no swapping between column and line. If you want column, you have to select it.

But with this change we have more control over how our units react, even though high elos can consistently determine how to move units between line and column, we can assume the vast majority of players still have instances where units do not behave in the manner they would expect, and part of that problem is due to the automatic shifting between formations

This isnt a discussion on how to work around the “bad” behaviour, this is a treatment for the cause.

I’d say change box formation to column and “no formation” to that, no formation, like villagers or every unit in AoE1

Yes I think it would be a better approach

yeah obviously this is the pipe dream, but if it was going to happen, i think it wouldve happened already, unless devs really are that lazy. i dont think they’re that lazy, and its actually a design choice

people have been asking for “no formation” forever, like literally, since the game came out.

so this change is the next best thing, hopefully we can at least get “no formation” on siege units (since they’re the most hindered by formations, especially rams)

I would be super happy if they can make melee pathing similar to that of starcraft broodwar. not the best but its still a huge improvement over aoe2

so this change is the next best thing, hopefully we can at least get “no formation” on siege units (since they’re the most hindered by formations, especially rams)

Yes and also the ship like what they did in AOK. Unit with large collision box with formation is really a disaster.

TBH, I don’t think is too difficult to add new formations in the game (it could be add as a second page on the menu similar to how the dock works)
The game already knows the difference between “line” and “column” formation; it changes dependent of how far you click the selected units to the target
Also the “no-formation” option: villagers and AoE1 units move this way
I understand is not a priority but could be a good QoL addition. If ### ### in the game files you can even find weird formation icons like flank-right, flank-left and ambush 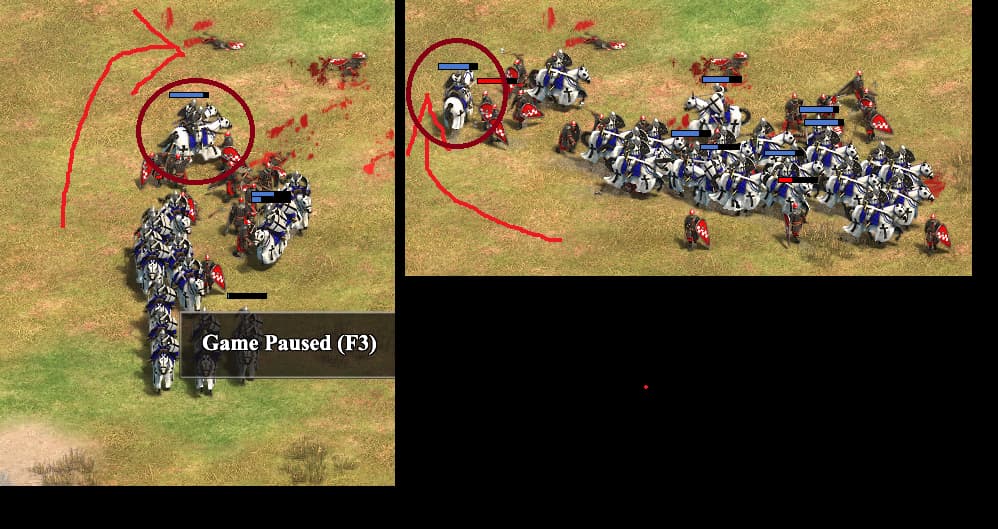 so i didnt realise so many people dont seem to understand how the automatic change between column and line actually leads to worse path finding.

these knights engaged with serjeants, when told to withdraw (clicking too far away) causes the knights to change from line formation (spread out wide) to column formation (narrow)

this forces certain knights to try attain a position at the back of the column, this point (in many situations) is actually towards the enemy and in the opposite direction to the command

Exactly, this ist so annoying. Units switching from line to collum when withdrawing from a fight causes the units that were Back in the fight to Go in the back of the collum giving enemy Units alot of free Hits. If every unit would Just 180 it wouldnt be so big of a problem.

If every unit would Just 180 it wouldnt be so big of a problem.

Yeah that would be great as well, and units prioritising moving towards destination over formation shape (initially) would also make a world of a difference, and I think it’s what other games do instead of aoe2.

Which seems to emphasize returning to formation, before moving to destination. Which is horrendous.

I don’t know how this isn’t brought up in every discussion with the Devs.