Changing Samurai to a cavalry unit?

My thought process started when I saw this image made be @Seicing:

Everyone agrees that samurai need some sort of change to see more play, and this is because of a few issues:

In short, infantry bad → even if you want infantry champion easier to get to → the only situation samurai are significantly better than champions are against other infantry UUs and those aren’t common.

The stats would have to be reworked obviously. Cav samurai (cavurai?) can be balanced using one of two ways:

Either they are made cheap (relative to cavalry) but aren’t the best all round unit prompting you to make them when the enemy is making UUs but not when they aren’t. In this scenario their bonus damage and pierce armor will be low making them a soft counter so numbers will still play a big role in who wins (eg. 10 samurai still lose to 15 leitis, archer UUs can still kite etc.). A great example of this is camels, if the enemy has cavalry, you should make them, but if they use infantry, archers, monks or any other non cav unit then camels are a bad choice.

Or cav samurai can be balanced like cataphracts, slow and expensive but a better all-round unit that absolutely decimates its intended target (hard counter).

So, what do you guys think?

Such a unit already exists. 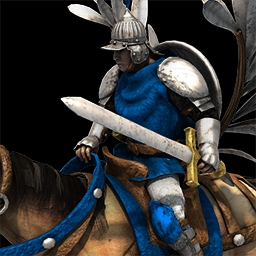 The Mounted Samurai is a heavy cavalry unit in Age of Empires II: Definitive Edition. The unit appears in the Kurikara scenario, which is part of Battles of the Forgotten. Despite being named a Samurai, the unit takes the appearance of a Hussar. The...

The new sprite for this unit should be similar to this image.

Other than that, what you’re saying is basically replacing the current Samurai with this unit.
I don’t think people would want to see the foot Samurai leave the game, and introducing Samurai’s archer mode to deal the issues has accumulated some consensus in the community.

While I agree that an archer samurai would also make them viable and allow them to fight other UUs, I feel they might become too good against other UUs and leave much less room for counter play than cavalry samurai (can be kited). I can’t imagine any UU standing a chance against them other than huskarls with some open space.

Of course, weaker stats might solve that so I’m unsure.

i think a less intrusive change would be to double down on their anti-UU feature and make them take less damage from (ranged?) UUs. So suddenly japanese have a super strong option against longbows, cho-ko-nu, etc.

They would need to make a new armor class for that, but I suppose that’s not really a big hurdle.

I’m against anything which makes the anti-UU damage more effective though. It’s very unfun in multiplayer games whenever it actually does anything. Scrap the Samurai anti-UU identity*.

What would their (supposed) identity be then? just faster attacking infantry? If so, then they’d be even more similar to champion.

Take inspiration from history. They could be cav archers. They could be archers that can switch to melee (though longbowmen are also known to have carried swords). They could have a mechanic tied in with the Japanese interpretation of honour. (Anti-UU damage was inspired by honour, I just think it was a nice experiment that should be scrapped now that it has become clear that it failed.) They had light, relatively weak armour. And their swords would break if they hit medieval European heavy armour.

What if Samurai have a similar shield like shirivamsha rider but only work for melee attacks?
Giving Samurai a little micro ability.
This change could followed with an attack nerf. This way, samurai could have quick, but weak attack and dodge one attack. You could hit some swings, retire to recharge the dodge and engage again.

It wouldnt change much vs UUs unfortunately. Archers would still kite and kill them with easy. Infantry UUs they’d beat (but they aren’t common). And cavalry UUs would avoid them unless they had a significant advantage.

Overall I think this is a reasonable proposition to allow the Samurai to become more viable, and the current (infantry) Samurai would remain as a popular unit in Scenarios and Campaigns.

The biggest con I see is that it is much more disruptive than just giving the current Samurai more speed and/or PA.
The biggest pro I see is that it would give the Samurai actual utility against most UUs (still bad vs. War Eles and Mamelukes) and would be easier to balance than a toggle mechanic. Also, a lot of people have been calling for the current Editor unit to get a sensible skin, and almost none of the cavalry in game (including UUs) look particularly Asian, (basically Mangudai and Keshik).

Yeah my suggestion doesn’t solve the general balance issues infantry have, it runs away from it 11. Although them being weak to halbediers is a nice weakness that comes from making samurai cavalry that we wouldn’t get from simply making infantry samurai faster

I shared this idea in the hypotetical new bonus thread, butt I was frankly thinking in a Samurai reweork when I thought it.

An expensive UU that becomes stronger as far as they “learn” in battlefield. More simple, when a UU dies, the next trained UUs come with a little buff. Stackable up to 20 deaths. The buffs could be these:

This UU is expensive and don’t have Elite upgrade, but if you burn it quickly they payoff early.

So, what do you guys think?

The Samurai is fine as it is. I play Japanese quite regularly (on hybrid maps such as Four Lakes) and find it quite useful to have the option. Just two recent examples:

The first situation makes sense, however the second situation sounds like you simply need an emergency melee unit on the field. A stable to make a few knights would have served the same purpose or literally any other melee UU. Defending from surprise ram pushes doesnt feel like a significant part of any UU identity.

There’s a lot of flex room between (quite) situational and being the defining unit of the civ (e.g. Mangudai). I play Japanese frequently as well, and, as I’ve pointed out elsewhere, Samurai can be decent in some roles, but using them is usually more a matter of convenience than optimization. Basically when the following conditions are met it becomes a good idea to make Samurai:

-You have 2+ Castles (not needing to make trebs/research UTs), but not a lot of barracks
-Enemy is making infantry UU
-You can end the game or establish a winning condition fairly quickly by adding Samurai to your comp. (The longer you’re making Samurai vs. non infantry UUs, the more their ~45% greater cost than swordsman line adds up).

This situational nature will be exacerbated if militia line gets the buff some people have been asking for, of reducing the upgrade time/cost (which I think would be good). Does this mean that Samurai need to become a cav unit? No, but I think less disruptive buffs (more PA, speed) are at least worth considering.

True, but usually, the UUs that isn’t the core work as support (Throwing axeman, Ghbeto, Obuch) or serves to compensate some civ weaknesses. Which Samurai don’t do.
Which makes Samurai bonus even more awkward, because the concept “good against power units” just works for infantry.