Paid 60 bucks for the game, got about 80 hours of fun out of it. Overall, definitely worth it, but there’s honestly not much to keep players around anymore.

As evidenced by steam charts, the player base is dropping precipitously, updates are terribly infrequent, there’s a dearth of comms and developer engagement, and basic aspects of an RTS are missing from the game (who wants to wait 2 quarters to be able to “patrol” or pick your color or, hell, play a ranked match?).

I’ll check back in if new content is released in the coming years, but I truly think a huge opportunity was missed with this game. It should have been delayed ~1 year and packed full of content and polish, but it is what it is.

Enjoyed the discussions on here and all the best to those who plan to stick with the game!

Completely agree with you here. AoE4 needs more content and more stuff to keep you on here. Gameplay is severely one dimensional for casuals (of course pros will always find innovative ways to play the game but if I’m not building the Dome of Faith or the Council Hall every game, what am I even doing?) . At the same time, most interesting alternatives are bugged or not polished and they take away from the experience (I’m looking at you, Delhi).

Constructive criticism at this point is not possible because I feel like all the constructive stuff have already been said. Now it’s all about “Hey, remember the bug we reported. Is it fixed yet?”.

I am moved and extremely impressed with the way that AoE3DE is evolving as a well supported game with so much content and things to do… and it’s a smaller game with a smaller community that has always been ■■■■ on by the larger AoE2 community since forever. The love and affection from the AoE3DE devs shows!

I’ll forever be a huuuge fan of Age of Empires and I tried very hard to fall in love with AoE4, but at this point, it’s just not there yet. If it ever is, I’ll be back.

As evidenced by steam charts, the player base is dropping precipitously

I mean, hardly. This is for the past month:

The playercount has naturally decreased from release, and there are definitely things folks understandably want either fixed, rebalanced, or brought to the game, but there’s nothing “precipitous” about the retention here.

Regardless, happy to see you got your money’s worth, and maybe you’ll be back around in the future (if the game adds things that bring you back). No slight on you if you’re not, either.

I’d recommend filtering by “All” to get a better look at the data. On top of that, the holidays usually see games go through a spike in the number of players, typically because folks are off work/school. In that time frame alone, AoE4 lost about 44% of active players.

So yeah, I’d say my use of the word precipitous is totally fair. Notably, AoE2 DE is now once again the most played AoE game. That’s fine, AoE2 is a masterpiece, but I doubt the goal with this game was to begin sinking into irrelevance 2 months after release. 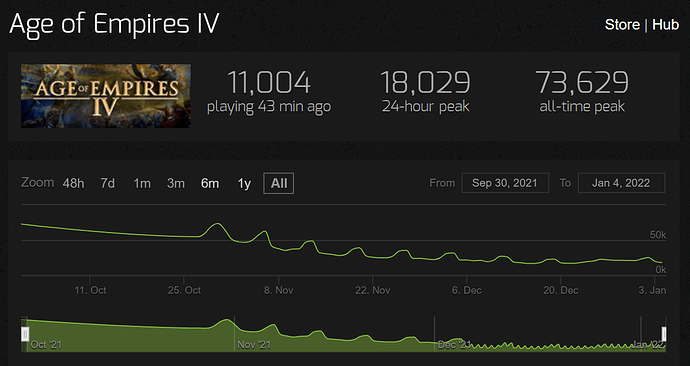 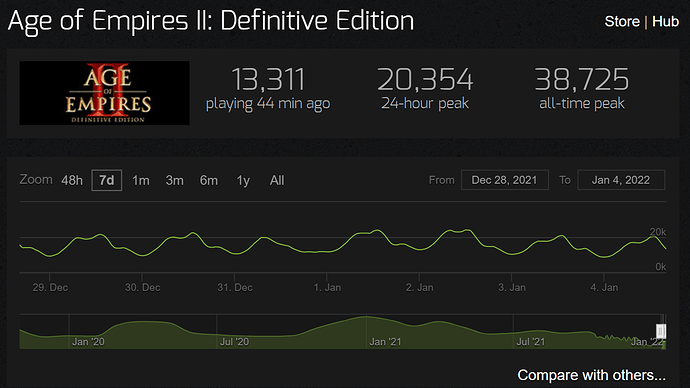 Can you take more screenshots comparing like for like? 7 days and 7 days? Then we can compare the rises around Christmas and new year.

Can we find also the player activity via the game pass & microsoft store of all the players that are playing over there? Without those these numbers aren’t 100% accurate.

This is public info, you can mess around with the charts and overlay them to see the data any way you want: Search - Steam Charts

Can we find also the player activity via the game pass & microsoft store of all the players that are playing over there? Without those these numbers aren’t 100% accurate.

I don’t think Microsoft releases that info publicly, but it’s fair to assume that it’s a small percentage of the Steam numbers, given how dominant Steam is in this space. I dunno, maybe add 10-15% more players?

I like the exquisite movies in historical battles. When the next patch is released, the number of players will increase.

I’m in the same boat. team games are a bad joke. only rush to siege and then its tank wars. this games like missing so many things. its like half done. To many things missing to even list.
Games a total joke. its already kinda dead. Still no patches to fix broken crap and half the online content missing to mabe we see in 6 months./ lol joke