I know it’s not a good idea talking about balancing before the new civ is even out, but here are some questions I have.

First look at the base stats of chinaco:

Basically a weaker hussar with a small bonus on both infantry (not heavy) and cavalry.
As a result, it deals 33 damage to cavalry, almost on par with hussars, taking into account the lower hp.
And I do not really see the point of this. Why not simply make the base damage higher and give it a smaller bonus on infantry?
The only difference at present is that it does a little less damage to…artillery and villagers? This is trivial because they are already very vulnerable to melee cavalry.
(I have the same problem with Lifidi Knight. The dual armour simply gives it more “effective” hp against most units except artillery, but no one would be hitting them with artillery anyway. Seems to me somewhat unnecessary)

And they also get a caballero card: 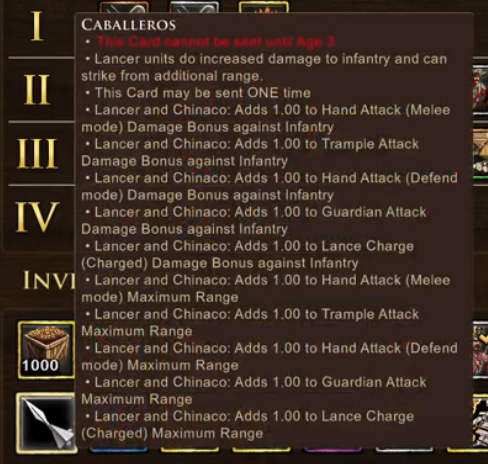 EDIT2: this results in 1.67x against heavy infantry that are supposed to counter it. That bonus may be too drastic, but I’ll test later.

Something off topic:
(1) Are we getting the same charge ability for other lancer-type units?
(2) There are already quite a few lancer type units (hand cavalry with bonus on infantry) out there like Jat lancers and Tokala. Maybe consider a new “lancer” tag?

The only difference at present is that it does a little less damage to…artillery and villagers? This is trivial because they are already very vulnerable to melee cavalry.

And it also follows the tradition of shock infantry getting less countered.

maybe it is meant to balance the extra range so it can reach artillery a little further but it takes more hits than a huss. Does seem a little odd though but I guess it makes it a little worse against HI than a huss (before the card). I think the extra range will mean that when it gets in melee with a musket the musket will still use it’s ranged attack so I think it makes sense it does a little worse against HI.

Seems perfectly fine to me.

I think this follows the same idea of sowars and naginata riders.

Can’t check right now but I think for sowars it does apply just to non-heavy infantry. I might be wrong.

So I asked a friend.
The bonus to all infantry is indeed added for both nagi and sowars, but both apply extra penalty to heavy infantry accordingly.

SO yes, the cards only add bonus to light infantry.

…alright then. Is that stated in the card description?

Because I rarely charged naginatas at musketeers so I never noticed.

Thanks. So the original problem with chinaco+caballero is still there.
I’d consider it as a more specialized version of cavalry damage card (only improving part of the combat ability). But I’ll test how it actually works out later.

Basically they are a cavalry that has a penalty vs HI, villagers and artillery.

Yes. But if they get that additional 1x bonus against all infantry without changing the x0.67 penalty against HI, it results in 1.67x against HI.
I think they should also receive the -0.27x against HI.

So this seems intended.
They will just become mini lancers. But nowhere near as good as them.

Seems to be a combo of what nagi & sowars get, combined with the cavalry archer card from otto that removes villager penalty.

They do have better base stats than lancer, so too many bonuses might be too strong. Not sure how it would actually work out though. Maybe it finds a good balancing point between hussar and lancer.

I think this follows the same idea of sowars and naginata riders.

'cept naginata riders have about the same damage as a hussar.

It probably does that.