I think that the Balsa Chincha is too strong and operational, in my humble opinion, it should be available from fortress age and ability canoes for Incas.

They shouldn’t have canoes themselves, but reed boats like what they used on Lake Titicaca as a canoe equivalent instead. It’s ridiculous that they gave them only one naval unit, and it’s obviously going to be hard to balance when it has to fill the role of every single other ship.

The card that lets chincha rafts train themselves could instead let them train smaller balsa boats made of reeds.

Here’s some sources on their reed boats:

A balsa is a boat or ship built by various pre-Columbian South American civilizations constructed from woven reeds of the Totora bullrush. They varied in size from small canoe sized personal fishing boats to large ships up to 30 metres long. They are still used on Lake Titicaca in Peru and Bolivia. This term is also used by California archaeologists and anthropologists to refer to the woven and tied tule reed canoes used by the Native Californians in both pre-Columbian and historical eras. .m... 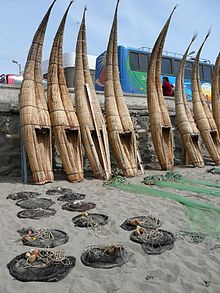 Reed boats and rafts, along with dugout canoes and other rafts, are among the oldest known types of boats. Often used as traditional fishing boats, they are still used in a few places around the world, though they have generally been replaced with planked boats. Reed boats can be distinguished from reed rafts, since reed boats are usually waterproofed with some form of tar. As well as boats and rafts, small floating islands have also been constructed from reeds. The earliest discovered remains f...

Pre-Columbian rafts plied the Pacific Coast of South America for trade from about 100 BCE, and possibly much earlier. The 16th century descriptions by the Spanish of the rafts used by Native Americans along the seacoasts of Peru and Ecuador has incited speculation about the seamanship of the Indians, the seaworthiness of their rafts, and the possibility that they undertook long ocean-going voyages. None of the prehistoric rafts have survived and the exact characteristics of their constructio...

It would be nice if they had canoes, and that they have a unique skin. Inca villagers also need a new skin, they use the same as the Lakota and Haudenosaunee