For Secondary Landmark at Chinese.

My English isn’t that good.

And what nerfs from his Late Game?

With the officer you can triple the units, in an archery you produce archers every 5 seconds, an Englishman produces every 7 seconds.

If Chinese recieve buffs on the early game then it needs to be compensated by nerfs on their late game.

@Adribird90 @StatedOregon5 if siege get a “rework” next patch it’s a direct nerf for Chinese late game. And if the clocktower nerf is incoming Chinese late game gets double nerfed. AND hopefully they remove building speed buff on wonders so Chinese isn’t forced to rush wonder anymore. Is this enough to start with?

I absolutely not agree. Its part of the civ’s identity right now, and its not like they are weak.
Speaking as someone who likes chinese alot (1257 ELO 1v1) early rushes are hard to deal with, but if you do then you most likely win. I like that gameplay. I always get rushed as chinese, holding early rushes as underdog and then getting an advantage completely does it for me.

I would like to see better landmark balance. Astronomic clocktower is a no-brainer to go for. All other landmarks are next to useless. 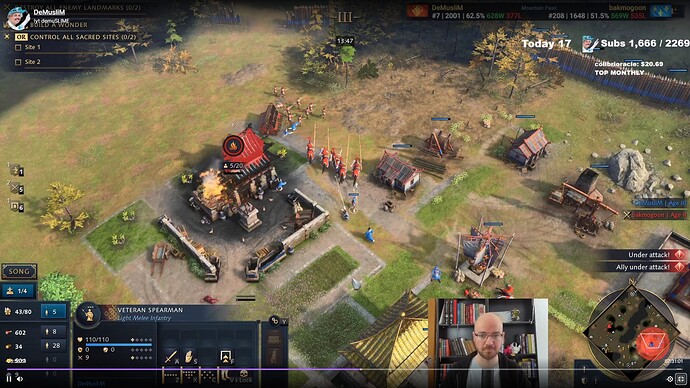 I know right?
These images are just shocking! Omg!
this is irrefutable proof that the civ needs a buff. How could he loose?

Guys stop denying the truth
French, english, mongols, rus have a ridiculous op glorious rush window in age 2 that delhi, abassids, hre and chines ecan’t handle well.
Btw chinese late game is a circus. I approve a up of their early and nerf on black powder units, but even DeMuslim could be bullied by the retard french cav supported with archers/rams. THIS IS A REAL PROOF OF HOW THE GAME SUCKS

He spent 1.8k ressources into aging instead of making units and he got punished by it.