Closer Look at a Ship from New Naval Video 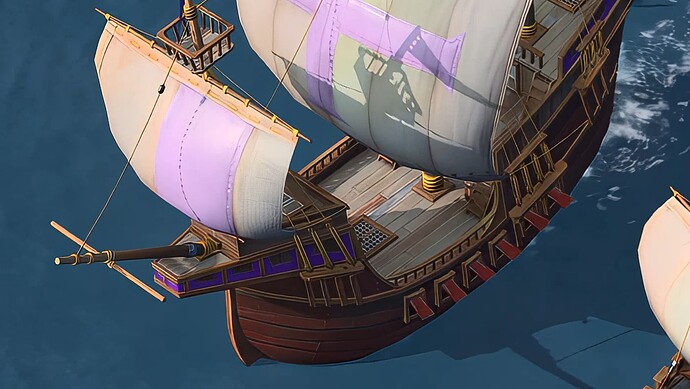 Here’s a closer look (heavily upscaled to 8K and zoomed in) to one of the ships from the newly published video. I’ll be releasing the upscaled footage soon on my channel but I wanted to share this with folks. Although I wish the ships were manned as well, I think the overall level of detail on some of the larger ships are quite decent.

we watched the game and soon realized that it’s the era of empires and that’s great! Era is Era, nothing else matters!! we are seeing the essence of the Age of empires!!!

Yes, nothing else matter, lol.

There is a lot i like about this model but it is quite simplistic and it seems they did not put much focus in the sea. The ship has almost no interaction with the water, only a very small wake, but no waves by the bow. It basically looks like its a sticker or floating on top of the water.

And then there is the water itself that makes this look like we are looking at this unit behind a blue screen in an editor.

like i would say the model looks a lot more ambitious than what we see in AOE3 but the effects esp in regards to water are obviously far behind that game.

It does seem like they took a step back from aoe3. I was hoping they would be big and have some kind of boarding mechanic. (I outlined this in another post lets see if I can find it… ahh here it is!)

here is how I would like to see naval combat.

You have the normal 2 types of firing ships like they have, the fast turning weaker arrow ships, and the position able fortress type cannon ones. Great for some balanced ranged warfare but is missing some elements. Such as boarding, and fire.

Warships get a boarding/man power rating, its like an energy bar that drains as the ships are touching. This is initiated by a grappling ability where instead of shooting, one can choose to grapple and board the ship. the stronger of the 2 ships energy bar then wins, as they slowly drain and a fight animation takes place. once one ship exhaust itself it is left with its remaining HP and converted to the winning player, but the ship splits the remaining boarding power, so basically that ship would have to be sent to the docks to repair and replenish to be useful, (both would since likely ship would take hits while boarding action taking place and will have no more boarding power) if multiple ships get involved to first grapple and immobilize a ship, then others can come into help board as well, and that can really deplete fast and make it an efficient conversion.

as a defense some ships might have a fire weapon that can take down ships faster than boarding can convert. (but still depletes any boarding power, well maybe not for some civs!) or specialized swivel deck cannons for the Portuguese, have a close shot gun like anti inf cannon that damages the ship a little but depletes boarding power a lot.

Now lets talk about the potential of fire, how it has been used is simply a sustaining HP reduction as long as damage is applied, then neutralized… but what if all a fire ship unit really had to do was start fires on a ship instead of continually pouring fuel onto it, starting out small but as 1 sec goes by goes to 2 alarm fire, 2 sec is three alarm fire that is self sustaining… and then it slowly depletes the HP until would eventually destroy the ship, and possibly spread to other ships if not micro ed away. This would then create ways to put out fires. Such as fire type ships being able to alternately pump water, or actually make a water ship. Each ship could have its own small water pumps that can help put out fires at small range but requires manpower/boarding power rating bar to drop to put it out. Note a 1-2 alarm fire as it grows could be easily put out by a ships own man power if they had sufficient enough of it.

transports. are slower than military units and can get grappled easily if not protected. Unloaded have a very small boarding/man power rating. But as they fill up with units this increases a lot to fully charged possibly the strongest, that would take a few ships to overcome.

To help with native balance on water canoes can kind of do it all
canoes, can shoot normally or set fires to ships, they do not have a big cannon attack, but some special ones may have a improvised rock thrower that they stole from EURO designs (think have the Lakota adopted firearms, how these cultures may have adapted had they fought on water)

so basically the strat will be to get close start fires on ships to cause havoc use some to board (their boarding power might not be a draining force, but a punch/ immediate drop. then they start shooting again, if enough ships do this they will overtake the ship like any other) and others in the medium distance to shoot targets. Large ships can grapple and use their man power to quickly overtake canoes but will not send their manpower to fight in them, so native canoes would just sink at that point, and the large ship continues with what it has left.

Possibly fishing ships can be grappled but have more of a chance to evade, again EURO civs will not fish from native rafts. (helping balance since a large fleet of ships will be stronger, native civs will have to adapt by rushing water and making canoes cheaply to start)

merchant ships actually have a small man power rating to ward off being boarded but can be boarded, however the ship is scuttled and a small prize is awarded the player. They do not get a grapple ability so no worry, merchant ships wont be fighting each other for the lanes.

I feel like mechanics like these would create some really dynamic and interesting tactics, the SEA is a barely touched potential of a secondary type of strategy play. within the same game.

I for one would like to see more agonizing pathing of more realistic turning radius’s, ship momentum,

Agreed. I think universally people agree that the water and its physics are definitely lacking. Here’s to hope that it’s something that could be improved pre-release.

Did someone notice that these two were on fire? 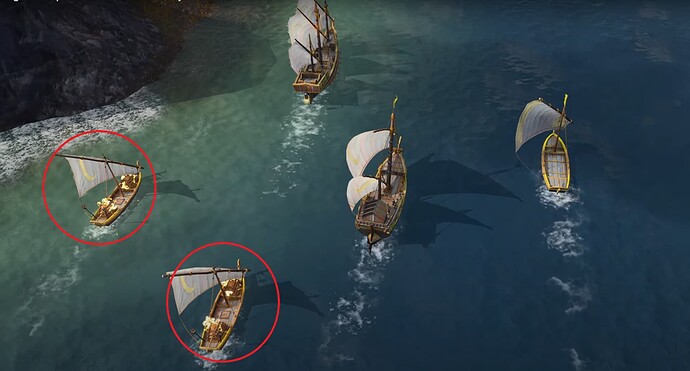 Indeed, I show a closer look in the video linked above. As mentioned, they’re probably demo ships.

The water looks so bad it’s not even funny…

I guess most people disagree, but I think water gameplay sucks in every Age game. I wish they didn’t include it in AoE4.

Judging by what was told by the developers (that they asked the community council, and it said it is a must to have water gameplay, even if most people ignore it), they don’t think it’s necessary either. That must be the reason water looks so much worse than the rest. It looks rushed.

look at the ship on the far right is that the same ship not on fire? or without a cargo? a merchant ship on fire? IDK but why does that one look so similar,

Looks like a fisherman boat for me that one

All I see is cartoon, Disney graphics.

We should thankful the AGE Council for the final success or falliment of this game at the end. From what i seen in the recent videos all suggestions from them seem pretty wrong to me

Agree with points 2, 3 and 4. I don’t like those directions either.

I like the graphics and art style overall, so the other points don’t bother me. I also don’t think the council had much influence on those aspects.

Regarding water, there is a poll in this forum with the result of 70% of voters saying they want water gameplay “no matter what it takes”. It means people want water even if it sucks, even if it makes the game worse. Seems aligned with what the council told the devs.

[Poll] Is Naval Gameplay really a MUST for you?

Are you sure this is not fortnite?