Does the trailer show a different game? In my opinion, the game shown in the trailers looks more like AoE online than a full-fledged part of the series. Chronologically now it is time after the industrial revolution (or during it) up to the 2nd World War (or even the Cold War). AoE 5 could refer to the present and the future. The trailer may introduce a new online game. So far, there has only been one AoE about antiquity - now it may be medieval. The number of civilizations minimized to 10 is a perfect fit for this type of game. I wonder if my speculations can turn out to be true and we will get two new parts of the series. 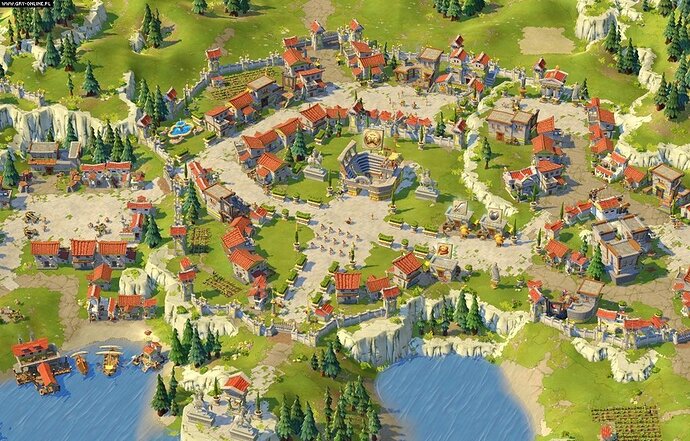 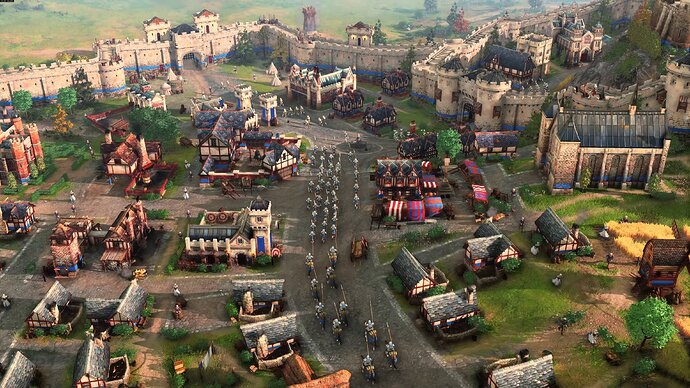 graphic style similar to the above - definitely different from typical AoE

Improved camera work, better graphics, a new age - yet they are similar to both. Everything indicates that we have been presented with the new Age of Empires but online. It may be a specially invented trick of the developers. I think the next trailer could be AoE Online 2, and a new trailer for the real AoE 4 - at least I hope so.

I don’t see the comparison between the two pictures, one is cartoony which is very clear when looking at the square buildings, they are basically not square but deformed to make it look goofy and cartoony. The other has realistic buildings with normal shapes.

Basically this post confuses me more then the trailer does.

Well, to me, both pictures look like cartoons. It’s just a graphic difference thanks to new possibilities - camera work gives a lot.

Besides, it is even more pointless to go backwards instead of going chronologically. The series should go on, not fall back.

So look at the church in aoe4, see the shapes, the straight lines etc. Now look at any random building in aoe: online, you see all kinds of curves in the walls, square roofs are deformed etc. This has nothing to do with graphical possibilities, this is a design decision. One wants deformed buildings to make it cartoony and the other doesn’t.

You are still entitled to find the graphics of aoe4 cartoonish (probably mostly to do with colors, saturation etc.) but comparing them to each other makes no sence since they evidently have made different design decisions.

And why is it pointless to go backwards? Is there a rule somewhere that everything has to be released chronologically? (starwars, lotr/hobbit etc.) Personally I think realistic modern warfares rts’es are always a bit boring. There is no melee/ranged distiction for example, everything is ranged, one just more ranged then the other. In addition, those should not be about huge armies anymore, but only about technology advancement. I think a modern warfare aoe would therefor change the aoe feeling completely.

If this is true, it may be a desire to beat the time AoE 2 - this part has the most fans, and the producer hopes to earn from them. That’s why I hope it’s not AoE 4. Because it would only be about money - why make new ones, it’s better to reheat a good cutlet and season it.

I actually wish AOE5 is a remake of AOE1 like how AOE4 was kind of a remake of AOE2. I would love to go back to antiquity but with modern graphics and gameplay. 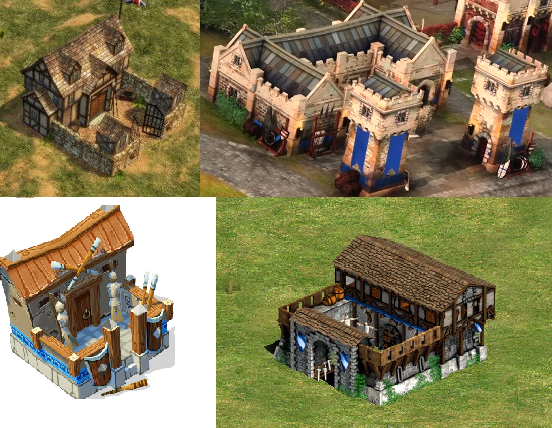 look, 4 british barracks from 4 different aoe games (i know one is greek but AOEO doesn’t have the british). you can see that the barrack from 4 follow the same artstyle from 2 and 3, doesn’t look nothing like the cartoonish style of AOEO and arguably have the most realistic proportions of the 4 games

There was a lot or critique that the AoE4 trailer looked to cartoony so it’s not unlikely that they tweaked the textures, lighting and post processing.
The can easily make the same game look way less cartoony just by colour correction or tone mapping.
Half of the cartoony ness is the colours and half is the simplified design. The second is definitely not there. You can argue that the colours are a bit more vivid than in AoE2/3 but that’s it.
This can easily be changed and likely already was.

AoEIV actually looks like a very dark game when it’s put side by side with AoEO.

You can’t possibly compare the style of 4 with AoE Online. They definitely look different.

I think the real reasons that it looking cartoony to some people are the detail on the textures and the size of the buildings.

Unit textures are very flat and undetailed, while building textures have very large details (such as bricks and tiles). And many buildings are very small compared to the units, especially the houses.

And I’m sure they have polished the graphics in the last 15 months.
Also proportions of weapons and buildings could have changed in the meantime. We should wait until next gameplay footage to know more about details.

LOL, welcome to the forums…people are still talking about ■■■■■■■■ “cartoony” graphics and not expectations, modding, matchmaking design, business model, and so on.