Hello everyone to my topic

I would like to share with you an idea that has been on my mind for a long time. Well, my dream would be a game mode based on the conquest of the world on the map - somewhat reminiscent of games such as Total War or Europa Universalis, etc.

Of course, AoE 3 is not designed as a “grand strategy wargame” game. My assumptions are fully adapted to the AoE 3 gameplay. 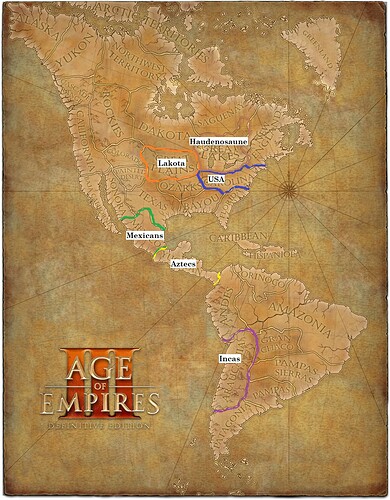 The map above is an example of what a game mode could look like. Each civilization starts the game with one starting map as its starting region. Each starting region generates coins, food, wood and XP. How many resources you have influences the beginning of each new conquest. Each map has assigned civilizations with which you will have to compete for influence. Diplomacy would be simplified to declaring wars and making alliances (through resources). XP would affect the number of available alliances and “Regions”. Too many regions with too few XP can be fined with resources. This mode starts at Age 1 “Explore” and new Ages are unlocked as time passes (maximum Age to Age 2 available at the start of the game). Each higher Age is unlocked after each new century. The game lasts from 1400 to 1900 - each new conquest of the map causes time to pass by a decade (+10 to the year of the game).

Please share your opinion on my idea. I’m counting on your ideas

I’d love a Conquest mode!
Even a similar one used in Rise of Nations, which was fairly simple, but effective.

You would have different scenarios for how battle is approached, for example if the AI attacks a settlement of yours on the map, the battle (i.e. normal AoE3 gameplay) would take place with a "Defend settlement’ scenario, where you have to hold-out for a certain amount of time. Throughout that scenario you could get shipments of allies/other settlements belonging to you, as long as they are next to the disputed territory on the conquest map.

I even thought about using Minor Civilizations as semi-full civs for Conquest mode, e.g. 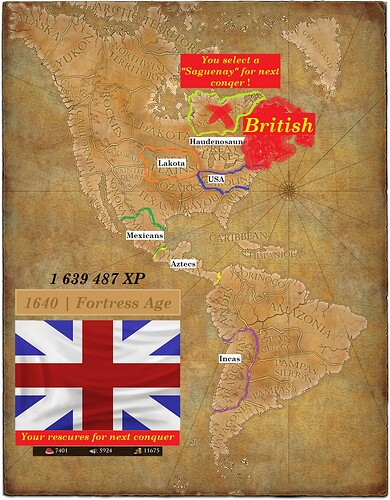 A lot of completely new maps and new Minor Civilizations could do with this mode. I would like this game to have an equal number of maps for all continents.

BTW. Especially for this mode, the following achievements could be created:

It should be that every player chooses 1 civ to “main” and they can vote using XP gained from wins on where to conquer and put in more points. More victories using that civ, and that civ only, would enable you to use more XP to have more “fame” and oust others from regions on the world map you choose to conquer. And homelands can also be conquered. When the season ends, the civ that wins (has the most regions probably) gets special city customizations, avatars, etc. and then it resets for next season.

Edit: And the UI must be based on that pretty loading screen map.