Control groups exclusivity - where art thou? 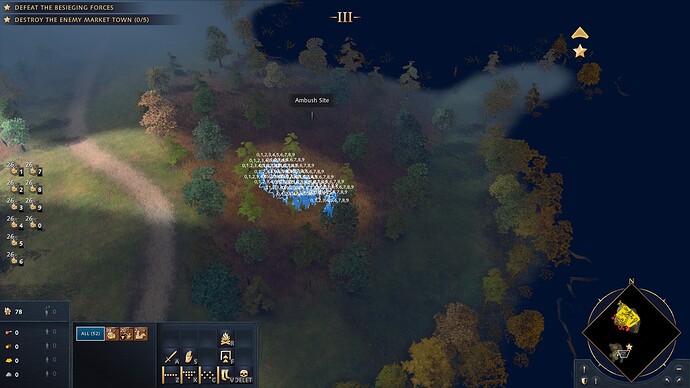 Hahaha, Yea, I wish there was a “Keep Control Groups Exclusive” option…

This is honestly my biggest issue with the game. In every RTS I usually have a big army that I split into multiple groups for flanking and multi-pronged attacks, but that’s extremely cumbersome in AoE4, because if I try to select a subset of my units and then assign them to a different control group, they stay in their old control group! There’s no effective way to split an army without manually selecting one half, and then manually selecting the other half, which almost always results in an imperfect split (some units might get accidentally left out), and requires way too many actions.

Some people post about this issue during beta and stress test including myself.

Just wait for the AoE4 eternal defenders coming here to tell us how this is a feature and it’s a good change. Probably just no one on shift right now.

I mean…I can accept reasons like “design choices” for unmanned siege or oversized weapons etc. No one can persuade each other on that anyway.
But for something like this, and the selection of player colors, and the hotkeys, and maybe the UI, which are so basic and so well-established and have been working perfectly since the early years of RTS, I cannot comprehend why they would make such odd decisions.

Just wait for the AoE4 eternal defenders coming here to tell us how this is a feature and it’s a good change. Probably just no one on shift right now.

I’m normally one of those AoE4 defenders. I love the game, but this is a big issue for me. I really hope they add the option in an upcoming patch.

tell us how this is a feature

It unironically is though, being able to have a unit in more than one control group is quite useful. They definitely should have it as a toggleable feature though so people can decide themselves.

Yea I can also see how its a feature for those people who use their control groups where 1 is the whole army, and 2 and 3 are the different things to split off, but many other people simply don’t use control groups like that - I know I am always updating my control groups a lot, as new units are build and the main ‘1’ army turns into a backup ‘2’ army because its got around the back of something and is no long my main front.

So is this even addressed or fixed in upcoming patch? Question to devs.

This “feature” really bothering me to play when I max my population and lead to lose in good battle because of mismatch control group.

The feature we need is called control group stealing. It exists in SC2 already. We asked for this in the stress test already.

It’s not only in SC2, stop making it sound like SC2 is the only who got it right.

There should be a hotkey to remove it from a group. You can remove them from a group by putting other units under that control group. I do see it used, for example a couple of top streamers like Viper put their starting scout on 2 control groups.

I can’t play normally with current control groups. It’s just a total mess in case if I have 6-7 different type of units.

I need make few actions instead one (make new control group for new unit and delete existing unit). Sometimes I must regroup during battle depending on how many units I lost.

I would be grateful if devs answer to this and tell if there will be changes or this feature not considered (auto delete unit from existing group when you create new one).

I dont like make a group units manually. If devs make some automatic unit group preset, I would grateful.

Yes! I want this QoL feature more than anything else. Control group stealing.

In case you guys don’t know what “stealing” is here are a few timestamps to watch for 15 secs each from SC2:

Also would be nice if when we do Shift + 1 it only adds units to a control group and doesn’t select that control group. SC2 behaves this way. We constantly attack front lines, add rallied units and flick SHIFT move cmd + A-move around the flanks or near our army. With AoE4, I would have to make sure I do my SHIFT queue commands BEFORE adding them to my existing control group as to not interrupt the current battle or micro of my main army.

I’m glad other people are asking for this too. This is THE MOST annoying thing in this game. Lots of times I’ve screwed up my micro because I can’t reliably remove a set of units from a control group.
Two ways that this can be fixed:

I agree that it should be implemented, but fixing control groups isn’t terribly hard if annoying, just need to recreate the control group. (IE you have knights and horseman as ctrl-1 but only want knights, you can create ctrl group 1 again with only knights selected and it will remove the horseman)

So, any update from devs when and IF control group exclusivity will be implemented in nearest pathes?

3 months from release and still no such simple QoL. I’m ready to play even with balance issues, but please make this game UI at least not frustrating.