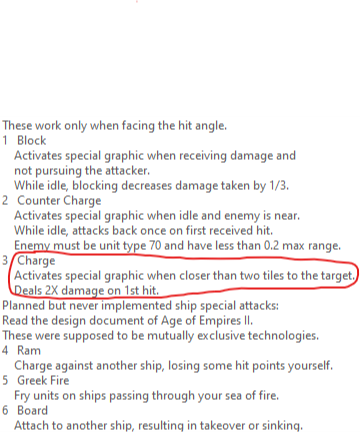 Not an affirmative statement, just speculation.

That is doable in the old cd game too but AI does not use this function in the vanilla,maybe the devs fixed it.
If they did fix it then the pike line and shield wall can also be used.

What the description made me think of was a mechanic that I saw in Empires Apart. (I feel so much more free to talk about that game here now that it has semi-officially failed.) It might have been in AOE3 as well or something, but I wouldn’t know.

What Empires Apart has on their lancers (I think) was that they had a little bar that would charge up as they moved. I gets to full somewhere within two seconds or so, and it does extra damage on impact/first hit/something. The charging bar, the bar that you have to charge so you can charge, words can be so nice and specific sometimes, makes sense because you want some sort of reasonable cooldown for when something counts as a first hit. The bonus does not activate if I rapidly click my unit away and towards the enemy.

The way the coustillier is described, “charges its attack stat” makes me think it is something like that.

And that would be fine. As far as I can tell it’s a good mechanic. There were some other design choices in there as well that make a lot of sense, like how every unit with an anti-cavalry bonus is identifiable by having a long weapon. That is the name of the trait too that would show in the unit description, long weapon. Hence lancers as anti-cav cav rather than camels. And the faster match speed could be a really nice change of pace as well. It was a cool little project even if it cribbed soooo many ideas and mechanics from AOE2.

Sounds sensible. Such a “bar” would be similar to how a monk’s faith is depleted upon conversion and has to fill up back.

I suspect indeed something that looks likes this:

This was how the charging in vanilla game was planned too with a cool off time.

I think that would be an HORRIBLE way to use the unit. Think about it, why use a unit that needs to take damage in order to hit and run when CA are a thing? Especially as a coustillier that charges then attack normally will reack up way more damage than a coustillier that spends its recharge time not attacking. I think the unit’s speciality will be dispatching weakers units quickly, while paladins will do the heavy lifting.

I think that would be an HORRIBLE way to use the unit. Think about it, why use a unit that needs to take damage in order to hit and run when CA are a thing?

Because CA cant kill kts unless in really high numbers. But a unit that has about the kts stats, but deals double dmg every like 10s? That would be very strong vs any melee MU.

Tbh i am not a big fan of this concept, because if thats what we are gonna get its another unit that is insanly strong when microed properly and very weak when it isn’t.

Wouldn’t doing this let the enemy knights get free hits against you?

Assuming the new unit is at least as fast as a kts? No ofc not…you dont just stand there taking hits, you run back, exchange 1 hit, run back again, trade hits again.

Then maybe they will make them faster than knights to allow for this strat to work at release and they will nerf them later?

I dont think you want a unit to engage run back and engage again every 10 seconds. Thats not what a charge attack is about with shock cavalry. Or did you see the riders of rohan return on their hill and replay the whole charge scene with theodens speech over and over again ?

But what do i know what you actually want in the game. We live in different times now.
I just know you shouldnt be that desperate to include new things into the game that you actually want to realize any lunch break idea written onto a paper towel by the og devs. There might be reasons they never realized it themselves.

I don’t think it’s really possible anyway unless it’s super fast just because units love to lose time forming a line when you click too far away.

Because CA cant kill kts unless in really high numbers. But a unit that has about the kts stats, but deals double dmg every like 10s

I don’t think it will work that way. I think it will be based on distance, not time. If you move more than 2 tiles you get the charge attack.

The thing with a charge mechanic is that it only would look good if the charge only applies when moving in a single direction or if you don’t turn aroud quickly, but I don’t know if it’s possible in this engine. If you can make coustiliers run in circles to charge their attack and then attack an enemy that is one tile away and still apply the bonus… well that’s a strange cavalry charge.

Aaah, I’m so afraid of what could result of this mechanic.

If you can make coustiliers run in circles to charge their attack and then attack an enemy that is one tile away and still apply the bonus… well that’s a strange cavalry charge.

Will all those micro worth it though? We’ll see.

Aaah, I’m so afraid of what could result of this mechanic.

True. This can introduce a lot of bugs and glitches.