While i runs Age of Empires IV, my CPU frequency drops, causing low quality in the game. 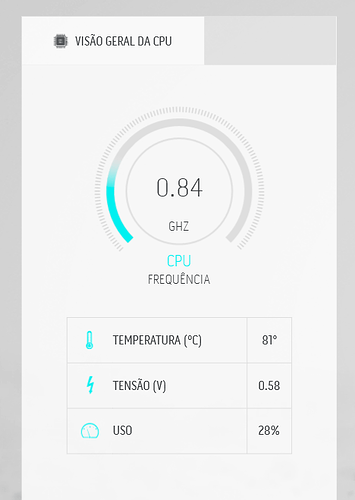 I notice that your CPU temperature is quite high. Playing games is quite CPU and GPU intensive and computers are designed to throttle the CPU if a certain temperature is exceeded. This is most likely to happen on a laptop as nearly all laptops do not have sufficient cooling to run at max speed for an entire gaming session.

Hello Domini, thanks for your answer. My temperature is not high. I have a Alienware M15 R6.

In fact, this is an high end config and I play many HEAVY games with ULTRA config with absolute no problem.
Only in Age of Empires i saw the frequency drops down and the game became slow.

My temperature is not high.

81C is absolutely high. It may be within operational temperatures (just about), but it will not be doing your system any good to be running at that temperature for any length of time.

This doesn’t mean the problem is necessarily with your hardware, I just want to say that that is high. The 11th gen Intel cores have problems with heating in general (I have an 11700K in a full PC build myself, vs. your 11800H in your laptop).

It looks like the 11800H in particular also has issues - https://www.reddit.com/r/intel/comments/w8teyj/i711800h_throttling_why/ (among other results from a Google search).

food for thought, the 81 degrees is average temp, but aoe4 is single threaded, so that 1 core is likely much hotter than this, then again, you can’t compare 11800H and 11700K directly, very different beasts, 11700K is absolutely more of a room heater, also he uses alienware, and their cooling rep ain’t great, even on laptops, those ofc have issues with not enough space for beefy cooler

This one is definitely interesting. I’d recommend you contact support with your DxDiag and warnings.log file. Thanks!

i find age III DE example interesting, as its similarly hard to run as 4

I had no problem running AoE3 DE high graphics. But in AoE4 I had to tune some things a little, and still, on water maps, there is so much scroll lag. Like just near the shorelines for some reason. So I just don’t play water maps to have a better playing experience. It’s not impossibly unplayable on water maps, but there is some scroll lag. The only thing that seems to fix it is lowering the image resolution (not the game resolution), but then the game starts looking a little blurry.

what i noticed is, there’s a ton of load you can’t even see without right camera angle and essence in general even in older COH games struggles to run with decent frame rate, and you are correct on scroll lag around water, in fact, this game has very noticable input lag (very bad given such input lag was undetectable in og trilogy)

Well, even CoH3 alpha ran way better on my computer compared to AoE4. The engine Relic uses must not be very well suited for bigger RTS titles. However, it’s just the damn shorelines/ water that lag so much. Not sure what’s happening there, the water, in my opinion, doesn’t even look all that great. I preferred AoE3 water. And nothing lagged there. How much can water graphics advance since 2005? Or well, since AoE3 DE anyway, I guess, and it looks somehow worse too, in my opinion.

water in 4 looks objectively worse, imo a regression across the board, now why is it this laggy, ig someone didn’t do their homework getting the shader to run well and look good, i’m referring to the depth effect, for some reason that one just casually doubles the workload

Yep. Seeing as how Company of Heroes doesn’t have water, maybe they’re just inexperienced with working with water models. AoE4 should not be physics-based, and there’s no need for it to be anyway. So it should have like you said, a shader to create a bump effect. The illusion of 3D water. You don’t need anything more than that in an Age of Empires game anyway. But whatever they implemented, and somehow it got approved through testing, (I mean did they themselves not notice how it suddenly ramps up CPU/ GPU usage?). I’m not even sure it actually ramps up anything when hovering over the water, my GPU seems to do the same load. Didn’t check the CPU though. But what CPU is concerned about, Age of Empires water should not have to have much of an effect on CPU anyway.

Guess they just somehow managed to implement some shader thing that GPUs just don’t like for some of us. When I lower the image resolution (if that’s what it’s called), it works way better. But at the huge cost of overall resolution, things start looking blurry. Not going to sacrifice that just for water. So is the water actually using AA or something? Who knows.

to be fair idk, and inexperience with water could be a possible explanation, i recall in discord relic devs themselves admitting they aren’t sure why reflections of ships aren’t showing unless under super specific angle, ofc everything in this engine is physically based, which will needlessly stress the cpu and the gpu in many cases with no real improvement to visuals. such performance loss should be reduced with optimization, but i have problems with visual side elsewhere personally, namely the distance fog appearing way too soon.
now is water using AA, turning it on and off doesn’t seem to do much, but then again, i can say that for every single graphics setting above medium across the board not just in water

Well, to be fair, I am playing on 4K. It’s the monitor I have so can’t do much about that. GPU is a 1080ti, which, while still a good card, as I can still play most games on high settings, is getting a little more dated these days. But it’s still above AoE4 recommended requirements. All my settings are set to high in the game except for image quality which I set to medium since it actually improves performance without seeing a difference anyway, and AA is set to off. Geometry is set to high, only mentioning that since it can go to ultra or something. Changing any of the majority of the settings doesn’t do much for me. The only thing that really works is lowering image resolution, but as I said, it’s too much of a quality loss just to make water work perfectly.

as mentioned, anything above medium or high is a change you can’t spot even on 4K, as stuff like shadows still flicker even on static buildings, like what year is it, and how low is their resolution for that to happen, had plenty of thoughts on visuals, and where they don’t justify poor performance, ye 1080ti is older, but we don’t really know where the fps drop with water in particular comes from, 1080ti shouldn’t have such problems cuz it has enough memory bandwidth (i do know however that this game uses 10gb+ of vram at 4K, for comparison, AOE3 DE uses 6gb at max settings 4K)

Well, that’s interesting to know it uses around 10GB Vram on 4K. That to me already seems unoptimized though. So my card has 11GB vram. So it just makes it for 4K then. I mean the game is perfectly playable with no problems except for water. Rivers are fine also. I have noticed most people these days say that the 1080ti is perfectly suited for 1080p gaming still today. But starts to struggle with 4K. If I don’t invest in a newer GPU, then maybe I’ll just get a 1080 monitor cheap if I happen to spot one, at least for gaming. But according to my own experience, the card still plays new games fine on 4k, I guess it’s more about people looking for a steady 120fps or whatever. I play on 60fps as that’s all this monitor can do anyway.

And yes, AoE3 DE ran perfectly fine on 4k for me, everything maxed. So this is starting to make more sense now. AoE4 is basically pushing my card because of 4K.

10gb is on average load, water for some reason is well above average, so this could explain the frame drops
after some looking around it seems water momentarily pushes vram usage to like 13-14 Gb

Well, that then explains it. So the water alone takes 3 to 4 GB VRAM on its own, if available anyway, which in my case, is not the case. Still interesting how the water can be that heavy on GPU usage. I studied animation, however at the moment I do architectural design, still has to do with working with graphics, if I can put it as simply as that. And I feel there must have been a way to make the water look nice while not nearly taking as much performance hit as this. The water I use in my projects looks way better and doesn’t take any noticeable hit compared to grass/ land/ buildings in my scenes. So they must have done something, whatever it is, I feel it was unnecessary for the purposes of an AoE game. Rivers work fine, just not the ocean tiles, if I can put it that way.

But anyway, sorry for the long messages, I appreciate your insight! I feel like I know now where the problem lies. My GPU is just getting outdated.