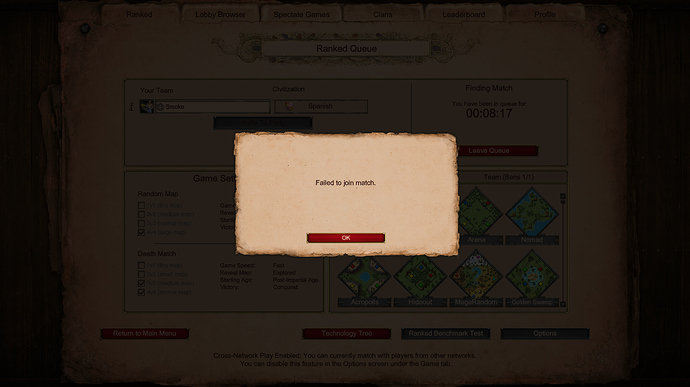 Today, I’ve had about 25-30 of these. What exactly is the reason for this?

Not to mention I’ve had about 7-8 game-crashes. Where it just suddenly alt-f4’s and I have to load the game again.

Devs. Before you make more useless stuff like word filter and such, maybe fix your poor-coded game? This is an embarassment to this community. Maybe Voobly should take over the multiplayer aspect of this game, yes?

Nobody else has this issue?

I’ve had a few crashes lately, but nothing out of the norm for this game honestly. It’s been like that since the beginning. I love when the game stops for like a minute and then fast forwards to catch up. That’s garbage IMO. Might as well just disconnect me at that point.

I didnt get that particular error notification but yesterday my and my opponents’ games crashed way more frequently than I ever experienced before. Most of my crashes happened when I garrisoned vills to click up to castle age.

This has started again, last time a few months ago. Now it happens again 5-6 times a day. Really irritating since usually in the middle of the match. For me it usually spikes around midnight hours. I live in the EU and maybe it is because of US players becoming active and overloading the servers or something, not sure, but this has to be fixed, game is unplayable.

I have the same problem, I don’t know what else to do to fix the problem… any idea? I did everything I found in internet… Did you bouhgt the game in Steam or Microsot? should be a difference?