At 15-16 minutes into a match, I wanted to set up a wall a little west of my base. It was going to be a long wall, so I sent two villagers to make it. Specifically, I queued up the entire wall with one villager, realized it would be better with two of them, with each of them moving down one side of the wall towards each other. When the wall was nearly complete, I decided to tell ONE of the villagers to place a palisade gate on the few remaining wall foundations. She started building it, and I noticed that the other villager still appeared to still be building at the side of a placed gate when I did not cancel her order to build the wall. The game crashed for both myself and the other player immediately after that.

I expected the gate to place, the build order for those wall foundations to be canceled
and for the game to then proceed normally 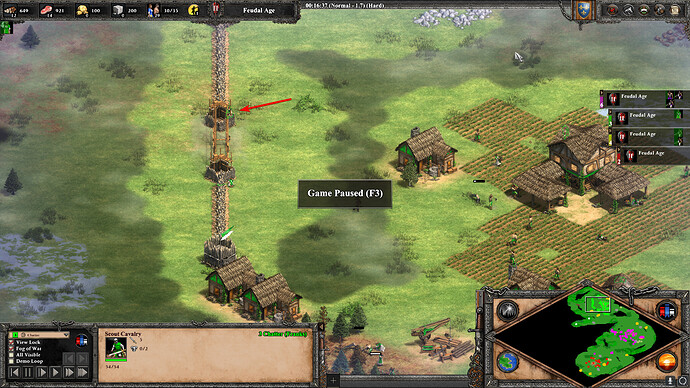 Arrow is pointing at the villager that was queued to build the whole wall from north to south. The bottom villager was instructed to make the gate on top of the wall foundations. Photo taken an instant before disaster.