That Cumans should get bracer isn’t a new idea (see The Cuman Kipchak - An Analysis - #29 by AoE2and3fan), but it’s a good and probably right idea nonetheless.

Unlike all the other weakest Arabia civs, Cumans don’t even have a great navy, actually they probably have the co-worst in the game (with Aztecs, since always an awesome Arabia civ., even though they might have been nerfed too much by now).

Admittedly, Burgundians aren’t the greatest naval civ., but it is by no means bad (elite cannon galleon, fast fire ship and galleon with bracer! The official naval civ. Portuguese doesn’t even get all that) and they also desperately need a buff. 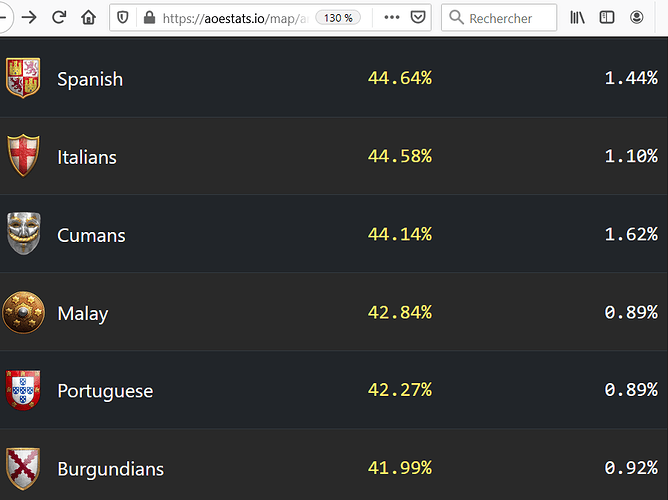 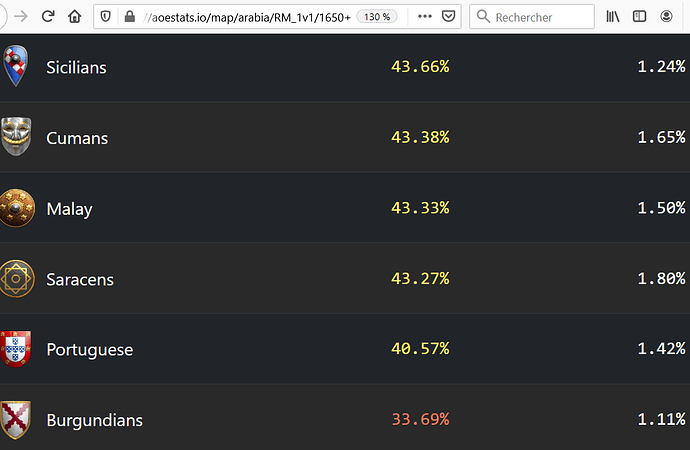 The Cumans are the only civ. with an archer UU to lack bracer which feels wrong. The devs clearly feel the kipchak is still a great unit, as it even got nerfed again not long ago, therefore the kipchak’s base range could be reduced to 3 (like the mameluke) to offset the bracer impact. The kipchak would get worse in Castle Age, which is its current peak, and stronger in imp., when it currently falls off pretty badly.

Bracer would also mean that Cuman cavalry archers become a serious thing. Plus it would add a new flavour to the already existing strong CA civs. We now would have a cav. archer with more speed ! Steppe husbandry would actually become meaningful for cav. Archers! The Cuman CA are still going to lose to the top-tier CA civs (Huns, Turks, Magyars, Tatars, Mongols if there wasn’t the even better mangudaï…), so no meaningful worries the Cuman variant would get OP.

Bloodlines may seem big, and it indeed is, but one has to remember that lacking bloodlines weakens the Burgundian late game significantly. One has to think about the hussar-line as well here. (The cavalry UU would have to lose 20 HP like other bloodline civs).

Another civ. can currently field better heavy cav. in Castle age without the superior unit upgrade! Lithuanian Castle age knights with three or more relics beat Burgundian imperial cavaliers, which seems really off. So the Burgundian power spike should be completed by guaranteeing them the best Castle Age heavy cavalry no matter what.

Lithuanians will still have the game’s strongest heavy cavalry with 2+ relics. (In my opinion the cheap leitis w. a minority of 2 relics is even preferable to a paladin with 4 relics, as the leitis two-shots an arbalest like a huskarl or three-shots a halberdier like a cataphract).

So it will become a typical AoE tradeoff. If the player thinks he can win in Castle Age with heavy cav., Burgundians are simply the best. If he however thinks the game will go late, Lithuanians (or Franks) are preferable.

Burgundians are arguably a very unique civ. within AoE II already. So I think a traditional buff through a tech tree change is preferable to a new bonus.

That Cumans should get bracer isn’t a new idea (see The Cuman Kipchak - An Analysis - #29 by AoE2and3fan), but it’s a good and probably right idea nonetheless.

No
Bracer is what keeps Kipchaks away from being OP
I would just give +1 attack to elite kipchaks, and damn, Steppe Husbandry affecting them and Genitours.
Compare to the Mongols, they have bracer but lack ring archer armor so their cavalry archers are much better than the cuman ones (also fire a lot faster), but even here people still uses Mangudai when available because is simply a better unit, the same with Cumans and Kipchaks, they fail their role at imperial age sadly.

And regarding Burgundians, people wanted a civ with full upgraded but Bloodlineless (ask @TriRem 11) paladins with a civilization bonus, the Burgundians cavalry bonuses are fine, is their eco that is a mess. and Bloodlines would turn their castle age cavalier and quickly tech Paladin just broken in team games.

Burgundians don’t need bloodlines. They need some eco bonus and/or a better UU to transition into in TG.

In the same page, cumans could use aUU buff, but bracer could be a little excessive. I would rate preffer some stats buff, long with a SL buff

I agree with both blodlines for burgs and bracer for cumans, but to be frank i’m fairly low elo so maybe i just have no idea what i’m talking about.

How? There’s no army you can make in Feudal to support ramming down a TC, since anything you make in Feudal gets shredded by TC fire. So in the end, the player can always use villagers or spears to take out rams. I’d just remove this bonus and replace it with something more useful. Maybe cheaper archery range or something (idea just made spontaneously, devs can obviously come up with something better).

I think they can live without the Bracer, just remove the Steppe Husbandry UT, and replace it with something like +1 range, +1 pierce armor to Kipchak. That way the player gets some real incentives to actually make the unit… as right now it’s only viable to make Kipchaks for a very short time window.

I’d also consider removing their cavalry speed buff and replacing it with some buff to their skirmishers.

+1 to this. Cavalier in Castle age is already very strong. Just replace their gunpowder bonus with something like 40% cheaper Eco techs, and the civ might actually just become viable.

+1 to this. Cavalier in Castle age is already very strong. Just replace their gunpowder bonus with something like 40% cheaper Eco techs, and the civ might actually just become viable.

the gunpowder bonus doesn’t need to be scrapped just add a new bonus.

I did try to use feudal rams as a way to get an edge in archers battles. Not the most tryhard thing to do but it’s pretty fun. Aiming for the production buildings is also a pretty good use for them, no need to kill their TC if they can’t make enough military anyway.

Cumans are already strong. The raiding potential with fastest cavalry in the game. Second TC in Feudal and Rams in Feudal. Bracer would make them broken. Like they are already a really good civ.

Regarding Burgundians… I say give it a few more months before balancing Sicilians or Burgundians. I think both are fine but more time will tell.

Cumans are a garbage civ. The whole ram and tc an age earlier is pointless because of the amount of resources one can get early in the game. Also, by the time you research cavalier tech, the enemy is already halfway in imperial age because of the slow time for the upgrade.

The 2nd TC in Feudal has a noticeable boost on their boom. Ram in Feudal is definitely not useless. If your opponent is booming or gone for Archers you can end their game with 2 rams in their base before or as they are researching Castle Age. Starting from early Imperial the fastest cavalry in the game make Cumans the best hit and run civ in the game. With strong micro a group of Kipchaks or just HCA can shred everything. I think you really underestimate this civ.

Side by side comparisons of Age of Empires II civilizations including win rate, play rate, and age timings for the 1v1 Random Map ladder across all Elo.

Side by side comparisons of Age of Empires II civilizations including win rate, play rate, and age timings for the 1v1 Random Map ladder across 1650+ Elo.

If your opponent is booming or gone for Archers you can end their game with 2 rams in their base before or as they are researching Castle Age.

assuming they don’t just use villagers to plink it down.

Starting from early Imperial the fastest cavalry in the game make Cumans the best hit and run civ in the game.

but they lack bracer for there cavalry archers so yeah. they are gonna get absolutely shredded by enemy archers.
cav archers with a maximum of 6 range vs generic arbs having 8 range. arbs win. enemy cavalry will scale much stronger. the best thing they got going for them is the fact that they can quickly replace lost units.

The problem with Cumans is they are not a meta civ. TC in Feudal, Rams in Feudal… those are all things that players of this game aren’t used to and require a major shift in strategy. Kipchaks also need a lot of micro to be used effectively. The high speed and low frame delay isn’t useful if you use it like a regular HCA. It’s definitely one of the civs that takes a longer time to master.

It’s also why the new civs Burgundians and Sicilians don’t have high win rates. I think people are still figuring them out. And besides 45% win rate isn’t trash. It’s a testament to this game that’s so well balanced.

Feel like Bloodlines Coustillier would be broken, it can already beat similar masses of counter units with proper micro

obviously if Burgundians got bloodlines the coustillier would lose health to compensate.

It is actually the Coustilliers which fall off in Imperial Age. Imagine investing a lot of stone to build a castle and get advantage, but the unique unit becomes useless after some time.

Main issue is the opponent can just straight boom into castle and throw down a 2nd TC then hit the Cuman player with knights before he’s even in castle. 2nd TC is cool but really its such a big investment that you’re pretty fixed to making it work and have no flexibility to build a military foothold. By the time your in Castle your opponent will have 2/3 TCs himself so could potentially have not be far off your vill count but without the exposure the 2nd TC caused. Also you build a 2nd TC and then you don’t have enough stone for a counter tower so there’s just too much that could go wrong.

The difficulty about balancing civs with weird mechanics is that they usually end up either OP or UP… and often this depends on when /where its used. We are seeing Cumans being played competitively this past few weeks in Two Pools Regicide Fortress, for example, where the 2 TC Boom leads to a very good vill lead. On Arabia its mostly suicide, so its going to have a very low win rate (and Arabia represents 65% of the games played!).

This game has too many civs… Most times the only way to avoid a civ being too good or too bad on something is to make them all very similar.

Cumans are already strong. The raiding potential with fastest cavalry in the game. Second TC in Feudal and Rams in Feudal. Bracer would make them broken. Like they are already a really good civ.

Regarding Burgundians… I say give it a few more months before balancing Sicilians or Burgundians. I think both are fine but more time will tell.

Sicilian may be fine, if You want a below average civ like many others un the Game.

But burgundians, they do need some modifications, specially for their eco tech bonus. They should have way better early eco to use their powerspike.