There are hidden bonuses with some units in the game, but directly, we get the following icons to express multipliers in units stats, like it shows here: 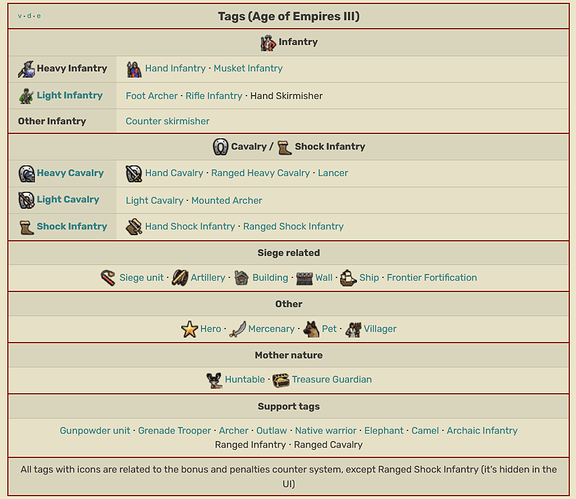 Yet, there are a few important ones without icons.

Now as for the simplification part, as we see below, it’s a tad unnecessary to show the infantry and heavy infantry tag for the Sowar, as it does the same ammount of x1 damage at them in the end. 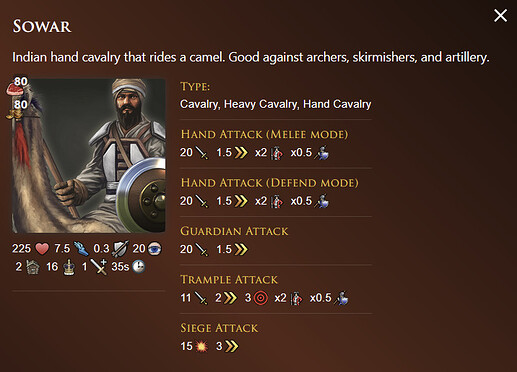 So now that we have the light infantry tag, why not just use that one showing a x2 and reduce the clutter?

It becomes far more prominent with some units than others (Especially the ones that counter cavalry, as they have to show the shock infantry tag as well).

Falconets as an example have 2 lines of attack, one for buildings and one for units, but same as the flaming arrow it could be reduced to 1 line

It would be nice for the stat nerds like meself, if we could expand the Stat UI in the configurations, like so: 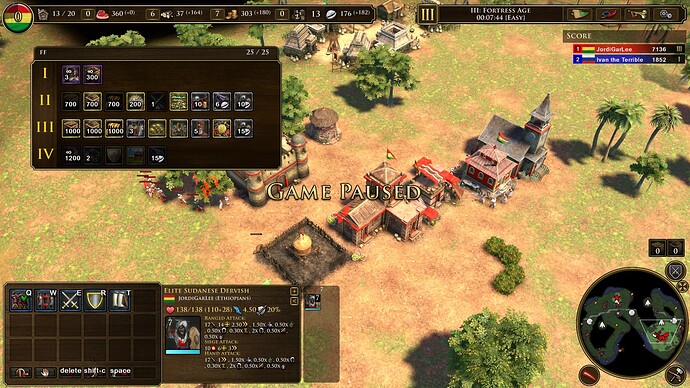 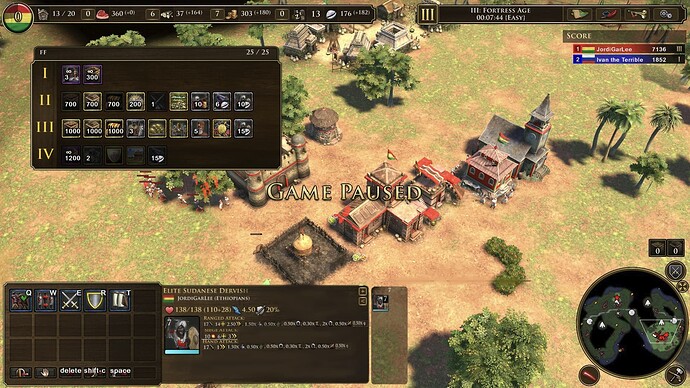 I would say instead of reworking what is useless rework these things because when I click on a unit of it tells me 10000 things, heavy infantry, ranged infantry, gunpowder infantry (I who have a past with this game can know what I’m looking for whoever is new will not understand anything) and being that new types of units have also been added or rather counters such as anti skirmishers units with the anti skirmisher tag I would say to make more clarifications in the descriptions of the units and reduce the number of tags that the unit presents because it is very chaotic. Simple descriptions example Crossbowman: Light infantry good against heavy infantry and light cavalry but weak against heavy cavalry and artillery.
A simple description is enough to understand and display the Light Infantry tag and that’s it, make distinctions only if the unit is hybrid.

The fact is that these bonuses appear because they are managed through the code and since you can’t do the calculation directly in the code and have it appear as the only tag you have to put both tags and then the unit will apply the calculation. You could directly use the light infantry tag and set it to *2 and leave the heavy infantry tag at *1 so you’ll get the same result but it will be clearer for those reading the unit’s stats (for sowar).

What is shown is what is directly calculated from the files, so unless we are changing how the units stats are sort of shown in general but not changing the backend, it wont be able to be consistent across the unit system

So now that we have the light infantry tag, why not just use that one showing a x2 and reduce the clutter?

for example, while the bonus system for the sowar might seem to be just for the light infantry class, it also has implications for a bunch of other units.

I did most of that chart! I hope it works for the community, it was a mess to understand before with all the light infantry history chaos that happened between vanilla, warchief and DE.

The problem to fix the bonus of Sowars are that some Infantry are neither Light and Heavy (mostly Siege Infantry) like Mantlets and such, but you can’t have a bonus against Siege units bc not all Siege Units are Siege Infantry

Some of your examples aren’t easy to simplify because there are infantry that aren’t heavy or light infantry. But that being said, most of those exceptions should be classified as either heavy or light. 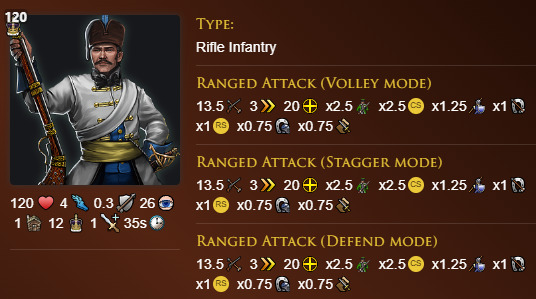 Heroes would make sense with tags of light or heavy based on whether or not they are ranged or melee (for some reason, only the Inca chief has one).

A couple of siege units like Huaracas and Fire Throwers would be fine as light infantry if they aren’t already. I believe Rams and Mantlets don’t even have the infantry tag anymore.

That just leaves the militias which would probably be okay as light infantry for most of them.

They should just get rid of the AbstractPikeman tag as a multiplier. It is only used by Harquibusiers and Mounted Riflemen which are both units that need a rework. The Harquibusier is probably way too OP, and the Mounted Riflemen is just bad on all levels. It has a terrible name and role, and horribly convoluted multipliers. It should be renamed to Chausseur (which is what it is supposed to be) and given the dismount function to become a counter-skirmisher on foot and be more of a generalist when mounted.

that wouldn’t work, especially now with the counter-skirms meaning those units will be able to snipe heroes from range.

the last 2 non heavy infantry heroes would also be sniped by all existing skirms.

I believe Rams and Mantlets don’t even have the infantry tag anymore.

manlets are still infantry, else you can’t counter them with cannons

Counter-skirmishers aren’t standard units so by the time anyone gets them explorers aren’t critical. And there are already several explorers that get countered by light infantry (Inca and Africans). I’m not sure why the Inca war chief gets tagged as heavy infantry but the Aztec one gets away with not having the tag.

It would be a similar case for Mantles where giving them the light infantry tag would only make them weaker versus a few counter-skirmisher units. And mantles have such high range resist that counter-skirmishers aren’t going to perform super well against them anyways.

Counter-skirmishers aren’t standard units so by the time anyone gets them explorers aren’t critical.

it will cause a lot of unfavourable situations for civs that might require even more weird tags and multipliers to fix.

for example the haud explorer is a key unit since it has that hp aura and is costly to recover. allowing counter-skirms to just be a nope at range means haud is effectively down 10% hp for the entire game. it also means that any civ that get decent counter-skirm access like germany or italy is just an instant win against haud (especially if manlets are also to be light infantry)

for a good chunk of age 3 a lot of explorers are game tipping units that rewards micro for snaring so I think it will just lead to very unhealthy gameplay.

another problem is early native unit treasures, there was already a period in the game where fights over these treasures often end games since the first player to get them can hunt down the opposing hero and gain full map control and often just win. they had to add heavy negative multi to units in age 1 because of this but if we make the melee heroes all heavy infantry that would just make skirm treasures instant death as well. so then you either have to make the negative multi even worse

The case of the african and inca heros are where they were designed as such and therefore have those weaknesses in mind, not just adding tags onto it. The african heroes are range cav by nature, have related multi and has the benefit of being a fast unit in age 1. The incan hero has melee armour and muti against cav and shock infantry.

Also just realised the other unit that would kinda be really messed with by the tag system, the arrow knight which would be even more useless if they are also countered by counter skirms

All these problems are due to changes made in tags for some units, all unit tags should be reworked from “0” to establish a clean tag interface

another problem is early native unit treasures, there was already a period in the game where fights over these treasures often end games since the first player to get them can hunt down the opposing hero and gain full map control and often just win. they had to add heavy negative multi to units in age 1 because of this but if we make the melee heroes all heavy infantry that would just make skirm treasures instant death as well. so then you either have to make the negative multi even worse

For siege units it looks like there are actually quite a few that are counted as infantry (Arrow Knights, Flamethrowers, etc). If all those became light infantry I think it could justify giving counter-skirms something like x0.75 vs siege units. They’re already a very niche unit so it wouldn’t be the end of the world if they became weaker against things like Grenadiers and Oprichniki.

Yeah but that doesnt simplify the tags problem does it? we are basically just shifting where all the tags complications go. Now the counter skirms will have a a bunch of negative multis to prevent it from just dominating the field with siege units and heroes.

it also doesnt solve the case of things like Caballeros and the chinaco where trying to increase damage against all infantry will lead to very funny math and then you have to add a bunch more conditions to get it to be have as is.

inca works because it has its own quirks and abilities , trying to say its easy and apply it to the chinese monk and the aztec hero is a folly. and its a rework for the sake of making something else works, its not worth it.

we are basically just shifting where all the tags complications go. Now the counter skirms will have a a bunch of negative multis to prevent it from just dominating the field with siege units and heroes.

For cards that change multipliers that’s easy enough to adjust them to work as before, so it shouldn’t be a problem unless it gets overlooked.