BEFORE REPLYING: I DON’T WANT TO HEAR, “THAT’S THE WAY IT’S ALWAYS BEEN”. Incorrect. The majority of people replying to this thread don’t really know how it works, and they don’t know what they are talking about in addition to NOT understanding the issue. I would recommend creating a sandbox and carefully going through these steps outlined before even replying.

To replicate, follow these steps carefully. This exploit occurs with patch 10257.

@tahska
How is this a feature? I think you’re missing the ungarrisoned part and you didn’t read this carefully and followed through.

Actually i think if it works totally correctly step 8 should not be needed. The wifi should start to work wo the Scholar as soon as the Mosque is completed. The Mosque does need a scolar inside to activate influence. If you build a new Mosque a few tiles away the surrounding buildings still get the influence aura around them… And you only have one influence aura, not many small ones.

Actually i think if it works totally correctly step 8 should not be needed.

Why not step 8? You free yourself by having a Scholar that doesn’t have to sit in a building and can move to another area to activate the speed tech by leaving an empty Mosque. Are you understanding this correctly?

So essentially you can put scholars in buildings for the speed tech bonus, and then remove them. So the scholar is in activator of the influence, but then it’s no longer needed in order to influence the area. You can move the scholar anywhere to activate multiple influence areas without actually having a scholar there.

I 100% believe this is not an intended mechanic. The whole idea of having to put a scholar inside a building, and then being able to remove it and still have that bonus doesn’t make any sense. Why not just have the area of influence become activated by building a Mosque and be done with it? Why the extra to step to have a Scholar to activate it, and then the scholar is no longer needed to keep influence activated in that area?

The Mosque does need a scolar inside to activate influence.

Yes it does. What are you talking about? Again, another person commenting on this thread without actually reading it and testing.

See reply above and reread the steps carefully and reproduce in your own game. You’re looking over the steps skimming without paying attention.

Shhh, look into my eyes and say out loud “it’s not a bug, it’s a feature”

Here is a child drawing for the “know-it-alls” that don’t read instructions. 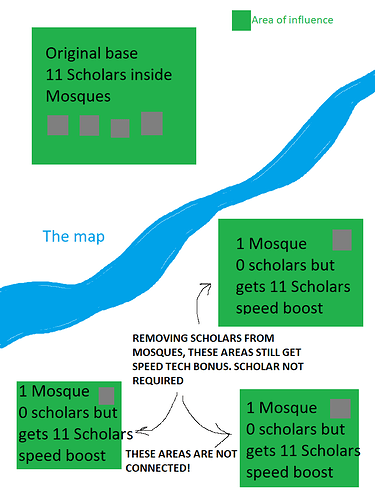 Instructions not clear scholars stuck in the river.

On a lighter note, this bug is already documented and tracked man since launch. I agree that even when you ungarrison the scholar on a remote mosque it should loose its lower research times. But you know what, I’ll happily accept this bug over the other bad bugs where two of delhi landmarks are totally busted, or the animation cancelling thing.

Great job on the find, have patience, the devs will get to it, when they get to it.

OK read carefully and found it’s a bug in step 7, blacksmith connect with the mosque must research faster although do not have scholars. I think other previous patch work like that. Due to for Water war you need build a mosque close to dock for faster research and still spend 100 wood

This is intended (or at least has been there since the beginning and I hope it stays that way). As long as a building is near a mosque and you have scholars garrisoned SOMEWHERE, research time is reduced.

You don’t need a scholar near a building to reduce research time. You just need a mosque.

As long as a building is near a mosque and you have scholars garrisoned SOMEWHERE, research time is reduced.

What you said is incorrect. If you build a Mosque + Blacksmith away from your base from where the influence is, that Blacksmith tech WILL NOT get the speed perk until you put a Scholar in the mosque.

The issue is that putting a Scholar in the Mosque enables the speed boost, but you can ungarrison the scholar and just leave the Mosque and still get the speed tech.

Another one, where someone has failed to understand the issue. Reread it again and go through it carefully.

But I think the bug is that the moment you have a mosque and blacksmith it should reduce research time. You shouldn’t have to put a garrisoned scholar near it.

But I think the bug is that the moment you have a mosque and blacksmith it should reduce research time. You shouldn’t have to put a garrisoned scholar near it.

Congratulations - seriously, you’re the first person replying to this thread that sees the issue. I can see them fixing this 1-2 ways.

From the beginning the 1 way it corrects, many times I build a mosque with dock or mosque with keeps to reduce the research time. It’s happened bug after this patch? Just test now. It’ works like 1 way, what happened with your Aoe4?

Take a chill pill, dude. I have tested it. And you are wrong.
Look at this pic. I have 3 mosques. Two are connected to each other with 1 scholar inside and one is remote with no scolars inside. I have never put a scolar in there and Sanctity research time is 2:46. The same as with the other two mosques. Or in other words, the same as expected cause each scholar garrisoned reduces the total research time by ~1.12x, so 210/1.12^2=~2:47. What matters is the total number of garrisoned Scholars, and that a mosque is next to the building where the reasearch is being done. Thats what the Wifi means. All buildings get wifi, regardless if there ever was a scholar inside or not. 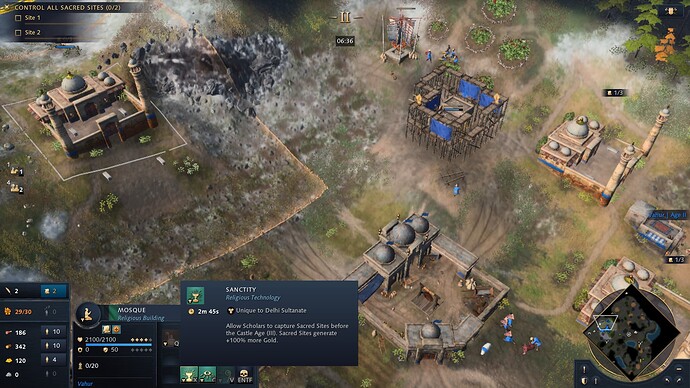 Can no longer replicate.

I don’t know if it was the map I played when I originally tested this. Tried to replicate again myself, not sure if something was blocking the influence or if it was related to elevation on the map. Hard to say.

Admin can close this out.

Drumsin via Age of Empires Forum

"You are so adamant on proving someone wrong when you still don’t understand the issue at hand. Please review again and reread the instructions carefully.

Your Mosques are probably still within the area of influence. Try again correctly."

Just a tip. Maybe you look at the pic before accusing others of illiteracy?

You can actually see the influence square.
And trust me… you will get further in life if all your relpys aren’t like " All you are too stupid to figure out simple things, im the only one getting to the point" 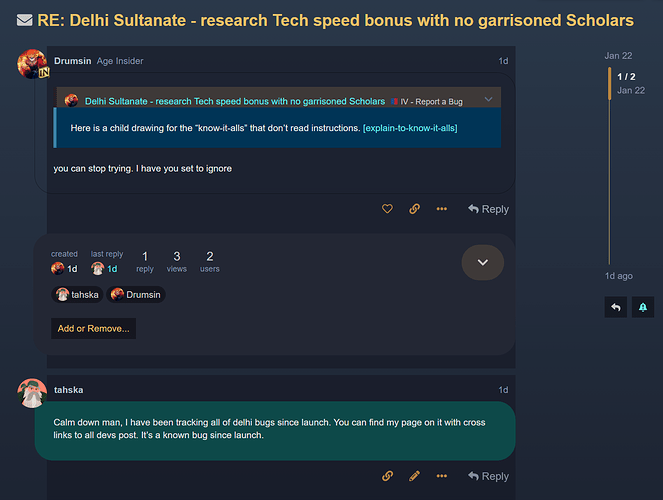 And trust me… you will get further in life if all your relpys aren’t like " All you are too stupid to figure out simple things, im the only one getting to the point"

Trust you? Pretty far in life, and I don’t need your life-splaining. I never called anyone stupid so you can apologize for trying to say something I said, but did not say. I’d say you’re in the wrong “trying” to correct someone on a bug forum.

My frustrations are that there were many replies, not even willing to test it themselves in-game. Majority of them were failing to read what I was experiencing and going off of their past memory of “how it works”, and that I was wrong. It’s a bug report!

The people replying could have simply said, “could not replicate it upon testing”. But no, everyone goes off this “know-it-all” attitude from memory without even testing and replying like they are boy genius.