Difference between lancer and knight?

Even Adam Isgreen was making a comparison with Starcraft but in the. End he goes “but that’s Starcraft”. As if to say Starcraft is so big it can’t be compared. You’d think a major dev’s ambition would be to beat Starcraft. But nope.

Actually they give the impression that they are afraid of being compared to ANYTHING.

Not a single Dawn of war game has broken more than 1k players avg on steam.
Don’t get me wrong, DOW 3 was a failure. But neither were any of its predecessors that successful.

So your only connection is “Relic make game too so history repeat itself!” 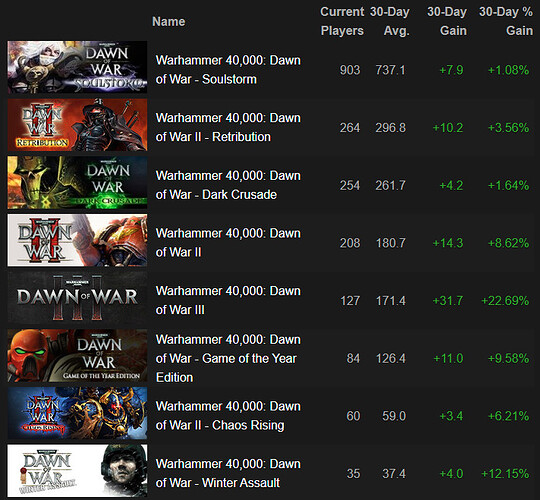 A lot of us are on this forum to provide feedback for the game.
If we weren’t interested in helping them fix things, why would we be here?

Actually they give the impression that they are afraid of being compared to ANYTHING.

It’s a replication if the RTS fans

When you don’t make comparisons they say “you have these unrealistic expectations!”

But when you say “no it’s because other Age games did this” they say “then you just want a remaster” and it becomes a never ending cycle.

And if they run out of shut down arguments, they just say “well I don’t like it”.

When RTS fans are so die hard in shutting down negative comments, I don’t see why devs would feel they have the pressure to do anything out of the box or even compare with modern games

You forgot
“RTS is not about this”
“xxxx has this feature but it is not popular as AOE2 so the feature is not important” (the only case where comparison with other game is allowed).
“You can’t say it’s bad or lazy. It’s just a DiFfErEnT dEsIgN sTyLe.”

Not a single Dawn of war game has broken more than 1k players avg on steam.

Because you’d have to be an idiot to play those games on Steam. Unsuccessful games don’t get GOTY awards and 3/2 large expansion packs, respectively. They were simply all made long before Valve forced all PC games to use its platform.
DoW is a Gamespy game, DoW2 was a GFWL one.
Their publisher has been defunct for longer than some people in this discussion have been alive so whomever the money goes to, it’s not the devs of those games. And so the fans have little reason to pay extra to buy the same game on Steam again.

Feel free to debunk me with the numbers of this hidden community.
Otherwise I will judge its performance on the most mainstream platform.

Aoe 2 (not DE) had the same gap of like 20 years? Most people played it on Gameranger/Voobly
And its numbers still blow DOW out of the water. 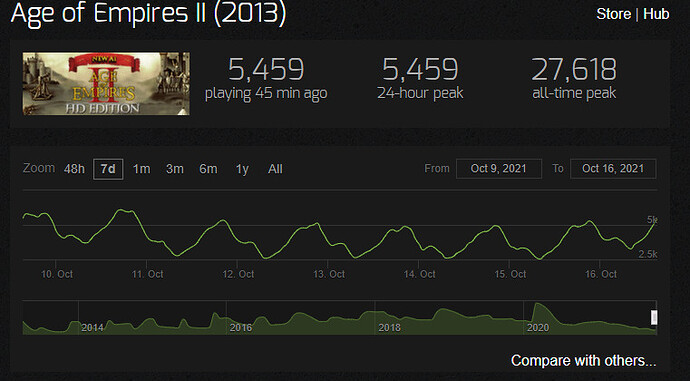 Age of Empire III (2013)
With 4 subsequent expansions and continuous official support up to 2019. You cannot call that a gap.

Age of Empire III (2013)
With 4 subsequent expansions and continuous official support up to 2019. You cannot call that a gap.

I’d happily concede like 5-6 years of that gap, but that still makes for 14 years before being released on steam. 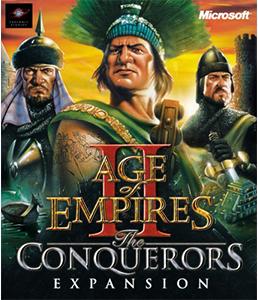 Age of Empires II: The Conquerors

Age of Empires II: The Conquerors (often abbreviated to AoC, although the official shorthand is Age2x) is the first expansion pack to the 1999 real-time strategy game Age of Empires II, released on August 24, 2000. It is the fourth installment of the...

Wow that’s grim.
So what you’re telling me is that DOW is even more dead than I thought.

So what you’re telling me is that DOW is even more dead than I thought.

Never heard of a game still “alive” with no official support for more than 10 years.
You should DOW at 2021 with AOE2 at 2011, before HD or the forgotten empires mod, or the number of players when HD was initially released (before the expansions).

What about:
“RTS isn’t about micro, and thanks to removed micro mechanics you can focus on STRATEGY AND TACTICS”

…keeps losing to faster players anyway, and starts comparing the game to other “RTS classics” like Hearts of Iron and Stellaris lul

Dawn of War 1 and 2 regularly had 10-20,000 concurrent players in their heyday. You’re looking at recent 30 day averages for games that came out over a decade ago. And DoW1 was prior to Steam really being a thing.

For me they are at least guaranteeing the game is very much playable and presentable to 1st day, so they are hurrying themselves ultimately.

This game took 4 years (?) But apparently half of this just to create the skeleton and ideas (1st trailers with trebuchets - mongols vs english). They are playing safe to pursue success but no only this, imo they had some problems with some mechanics and many things from medieval era that are not used to. Maybe they have listened before to feedback, presented us with a beta much earlier, maybe consulted people that would seek some details that distinguish units (chukonus vs xbowman, one of them with a short sleeve and the others with something different on the shirt), took some inspiration even from Rise of Nations about unique units with slight different stats and bonus applied. Maybe the pro players don’t treading lightly in some advices and feedback)

I feel this game will be casual but I hope not much at point people play it (like a slang we use here: one day in the life and another in death).

Modern games fails so hard to bring us memories. What will we remember in 10 years? I hope SP content solves this doubt. Maybe the world doesn’t need heroes but epics… YES

And the most epic I felt until now was the sound effects? And what more?

They didn’t even need to look to other games. Adam Isgreen would have been involved in the DE version of AOE II. That’s all he had to look at.

It seems to me that the alpha had sooooo many problems, that they were hoping to release closed beta earlier but spent too much time fixing everything from the alpha. As there were a few people who were so put off the game by participating in the alpha that they didn’t even bother with closed or open beta.

Both units are exactly interchangeable and generic.

AOE3 had Priests and Imams that were identical in stats, Europeans had ‘settlers’ while everyone else had ‘villagers’ seems like a similar thing here. I dont think its intentional deception just some flavour.

I dont think they need to adjust their stats for the sake of it. I prefer fewer more impactful differences between civs rather than lots of small stat changes.

Yes we can clearly see that from the recent French vs Chinese showmatch.
All the units are identical. Even the boats are basically just archers on water.
All the units have 2 arms and 2 legs - I mean how boring is that?
There are probably numerous stat differences, unique techs and active abilities that make various units perform differently but honestly, who has the time to figure that stuff out??

It seems they have several goals with their civ designs.

I think those are good goals for a competitive game, but they do introduce some limitations. If those are in fact their goals then I totally understand why they went for the level of asymmetry they did.

I think this is why every civ pretty much has access to the same fully upgraded core units and asymmetry overall is not drastic and implemented in ways such that civs reach basically the same power level in each area even if they go about it a bit differently.

Now, that is not to say that they couldn’t maybe add in more asymmetry and still accomplish those goals, but I see where they are coming from. I don’t think it has anything to do with being uninspired or bad design as some say. I do hope they are able to branch out a bit more with new civs in the future and/or balance adjustments to existing ones.

I would give lancers a little extra attack speed and hp and to knights a little more armor and attack damage.

Yes, they could - similar to how Palace Guard are slightly different than MAA. Same overall power level but can be used a little differently - like you can actually flank/outposition with Palace Guard because of their better move speed.