The game needs to separate the economic and military buildings as in AOE2. It’s time to unify the keys. 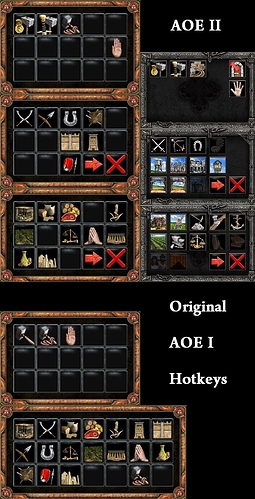 Im fine with bringing some little quality of life to AoE1, but Also dont try to turn AoE1 into AoE2, it will totally lose it identity, even if they have change alot already, I would prefer if they dont push more the transformation

I think that it is better to make the settings have a choice of two types: standard and suggested by you. For example, it’s not very convenient for me to play the first and second ages at the same time: I keep confusing the keyboard shortcuts. However, those who only play the first part will be more comfortable with the old hotkeys)
PS It’s a shame that the developers won’t do any of this anyway. They don’t care about the players of the first part (and the second, too, I reported a lot of errors, none really fixed, just add some nonsense)
PPS I’ll be glad if I’m wrong.

I was wondering, do we still have developers even?

do we still have developers even?

Well… the game got an update 2+ months ago.
According to SteamDB, no changes have been made (Steam version) since then.

I know Age 2 is the “favorite” one, but that doesn’t mean nobody likes/cares/plays Age 1