All functions offered under the cinematics tab in the editor are currently not functioning at all. Any videos selected to play before or after the scenario simply won’t when playing the scenario either as a stand alone or as part of a campaign. Likewise, it is impossible to choose a backdrop card for the scenario instructions to be displayed before the scenario in a custom campaign, since the corresponding drop down menu is completely empty, instead of offering the backdrops from the existinig campaigns like the original game did. 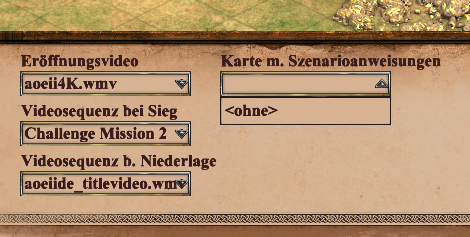 Explanation:
Three of the pre-existing videos were selected randomly, none of them will play at the given time.
The dropdown menu to chose a backdrop for the scenario instructions (“Karte m. Szenarioanweisungen”) is simply empty (“ohne”)