The following is about the moderate campaign difficulty AI (not sure about the others) and I experienced it most recently in the Sundjata Malian campaign (mission 4 for the hunt thing and 3 for the other), but also on often times on other campaigns before.

Some AIs try to hunt deer ridiculous far away from their base without even building a mill.
This makes it super inefficient through the long walking paths and the villagers easy to snipe, as they seem to not really care, if an enemy is near.
They do this despite being later in the game, having berries and wood and therefore plenty of alternatives.

They also have problems with gathering of other resources from time to time, but I’m not sure if this is related.
They sometimes seem to not place mining camps on gold outside their base, if near enemy units or the mining camp was destroyed previously, but mine there regardless. They also send their villagers repeatedly to their death through static defenses to get the gold.

They sometimes later in the game do not really move their lumber camp closer to the tree line when the trees around are chopped down.

I didn’t see a “trigger” for this behavior. It’s probably some AI scripting thing.

AI always builds drop of points near resources and tries to avoid gathering to far away from the base.

For hunting problem in Sundjata 4 with yellow villagers being a map away to gather some deer despite having berries in base. They already got some other deer half a map away beforehand. See replay below 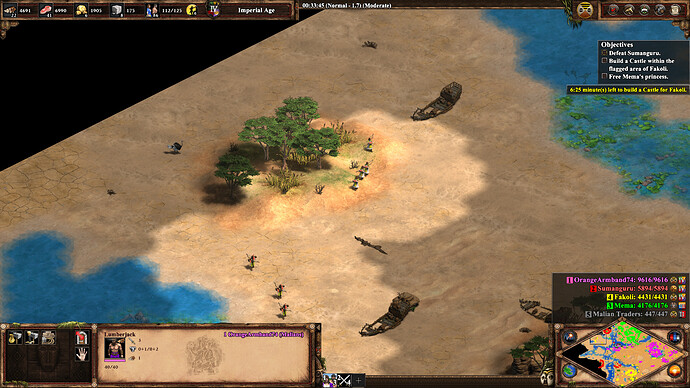