I am a low level player who plays a lot of team games and 1v1. Ranked bronze III and around 1000 in QMs. English is the only civ that currently feels OP to me. They win if they rush and they win if they turtle. I personally have more luck in 1v1s if I play English and since I am bad it leads to me to believe they are too easy to play. Is this how it is at higher levels of play as well? Should English be nerfed? Should other civs be stronger? Should I git gud?

At that elo you should focus getting better and not consider if civs are op or not. Those matters dont affect u because its your own gameplay that is lacking. Some civs are easier to play than others and others are stronger than others but if you play better than opponent then you can win

Here are answers to your questions.

No need to spamm forum

As the other user says, at low elo doesn’t matter if you choose a civ or another.

It would only affect the way you play, because a civ could be harder than another, but really you are not using the fully potential of the civ.

These stats are very useful, they even show win% vs game length which can help understand the civ better.
For the english: 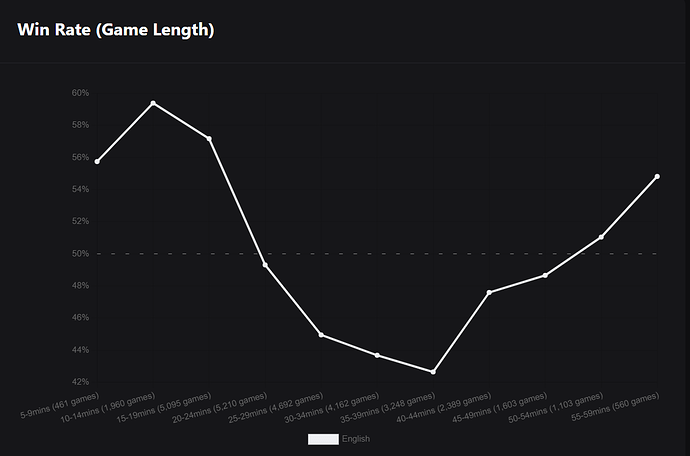 image1211×802 49.5 KB
With this information you could argue that the civ is too good in the early game, longbows (at 200% production speed from the LM), insane defense (200% damage from towncenters, all villagers are archers, network of casltes, even early man at arms with 15s training) and even extra starting wood and better cheaper farms which allows them to remain safe under the town center. But then after the 30 min mark the win rate drops severely only recovering a the very late game.

My humble opinion is that English get too many bonuses, but still is not OP. It is the easiest civ to play becuase it allows you to defend yourself against early raids effortlessly and it doesn’t have any gimmicks (with downsides) as other civs. It should also be noted that it is the most played civ and newer players gravitate towards it as it is advertised as the easiest.
At the pro level it is considered to be one of the best civs and if it wasn’t for the tournament rules forcing players to pick different civs every match we would probably see almost exclusively English, French and Mongols.

Again, its only my opinion but i would like to see some nerfs to English or at least not buffing them every patch, as they already have too much.

So you would like to see nervs to a civ that currently has a slightly negative win rate for each tier in the ranked season and seems to be just balanced out quite well with strengths and weaknesses in each stage of the game? Let’s say the devs nerv English and the overall win rate goes down to 46 % while 1-2 other civs go up to 54 %. How exactly does this improve the game play? What is your goal?

Yes, you should get good. Learn how to deal with the civ, watch some pro’s playing it and you will see that you were just missing the tools that were right in front of you to handle it.

LOL this is just BIG NO.

It is consider to be a mid-tier civ.

Its civ with super-strong Late game where only China can compete with them.

But guess what? during tourneys there is like 1% chance that game will go into late-late game where ENG is the best civ.

Its simply not picked because on competetive maps (like Arabia,Lipany) There is way more better civs. like Delhi, French or even Mongols or RUS (High wiev)

So all in all

Should English be nerfed? 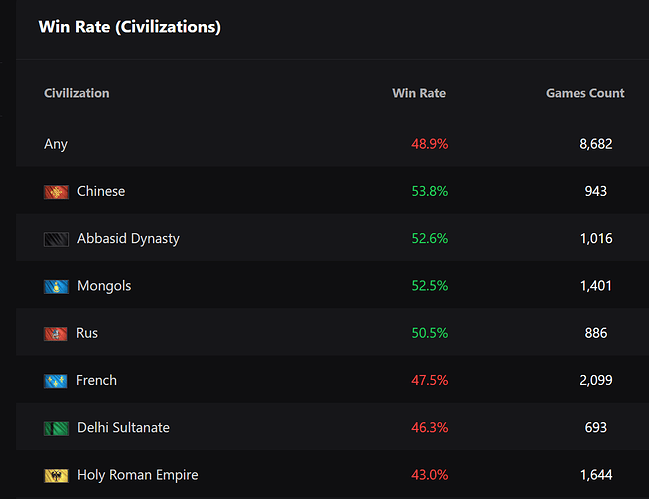 The recent HRE buff made the English lose harder to HRE but it still has mostly favorable matchups.
I think nerfing the French would make the game more balanced and would boost the English win rate to slightly over 50% (as it has been historically).
I do complain that they have too much, i should have explicitly said that too much in the early game. Buffing something to fix their weakness that is post 30 min would be great and justified, but they keep getting buffed in the early game…

This is a great question! My goal is for the game to be fun at all levels of play and I think it’s more fun when there is more variety. I actually don’t think English should be nerfed but I’d like other civs to get a boost so they are played more often at low levels. The recent change to HRE was great and I am seeing more of them. The changes to Abbasid were great as well but I’m still not seeing them as much for whatever reason. I’d like to see changes that make the less picked civs (at low level Delhi Chinese and Rus) more attractive to low level players so that gameplay has more variety. I want all the civs to be as fun (not necessarily as easy) as English/French and the recent HRE changes are exactly the kind of thing that helps. 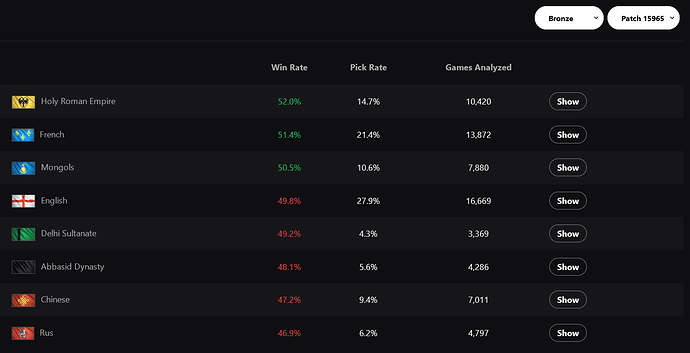 Yea I actually don’t think English should be nerfed I just want all the civs to be as fun as them so there is more variety at all levels of play. The recent changes to HRE are the kind of things I’m looking for - they feel more fun and I see them in more games now. I’d like to see some changes to Delhi, Chinese, and Rus that led to them being picked more at low levels.

English are probably one of the worst civs at the moment since the latest patch where mangonels do bonus damage to archers. That said they are fairly straight forward so people in the lower leagues might do better with them than some of the more complicated civs.

English are fine as they are. They are intended to be played easily. They are NOT too strong.