The most egregious that stuck out to me were these two: 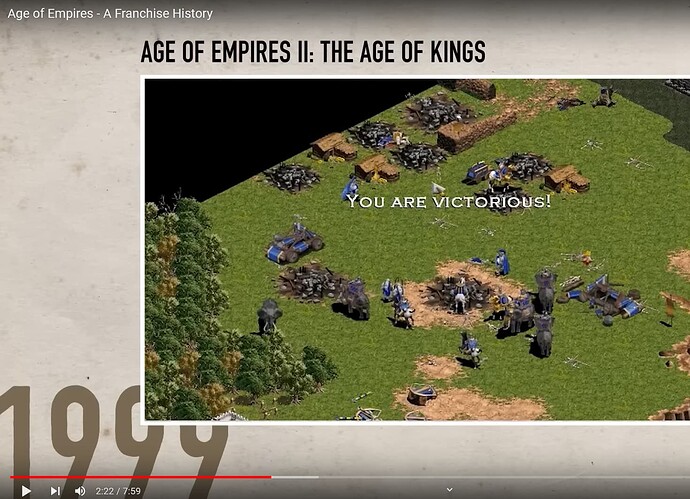 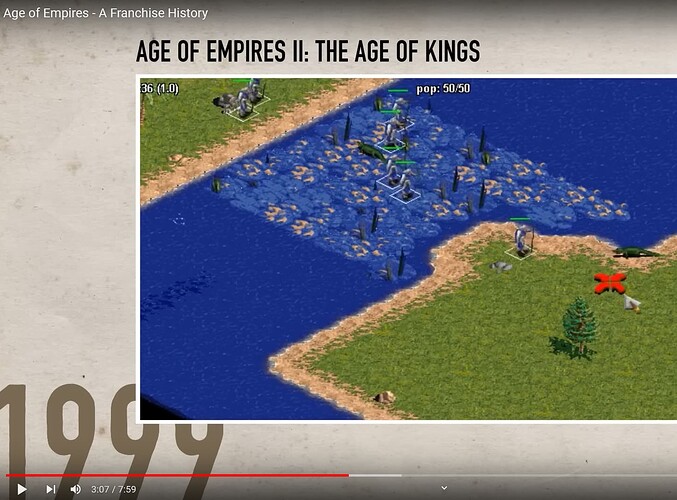 These images at 2:22 and 3:07 clearly show Age of Empires 1 screenshots being shown as Age of Empires 2 content. Alright, so they made a pretty obvious mistake there, but that’s not it. I did some more careful examination 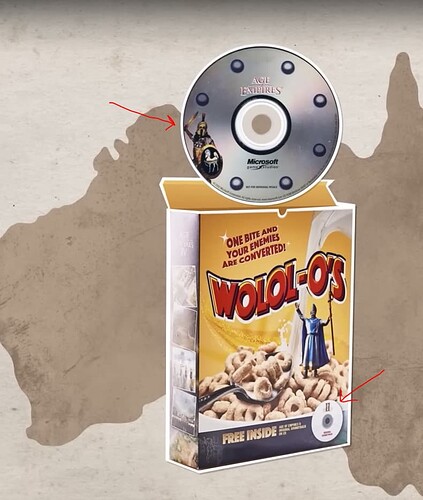 I’m not fully sure if they just consider the base game and the expansion one in the same, which means this wouldn’t be an issue. But at 1:30 they also do not name any of the Rise of Rome campaigns, and when they go to pick a civilization at 1:39, all of the Roman civilizations are absent. 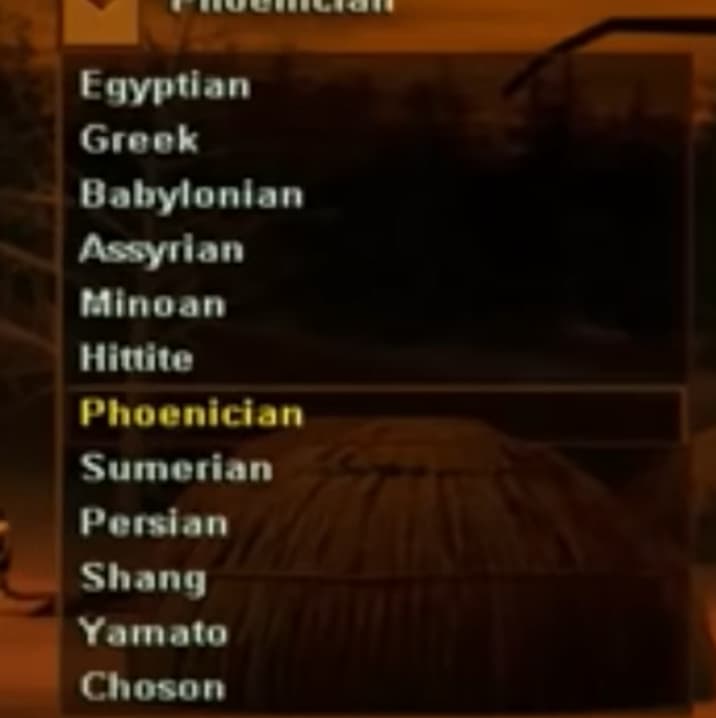 Which would make this image anachronistic, as the Armored Elephant was not present in the base game, only introduced in the Rise of Rome expansion, released a year later in 1998. They would not have been present in the year 1997 like it shows on this still from the video. 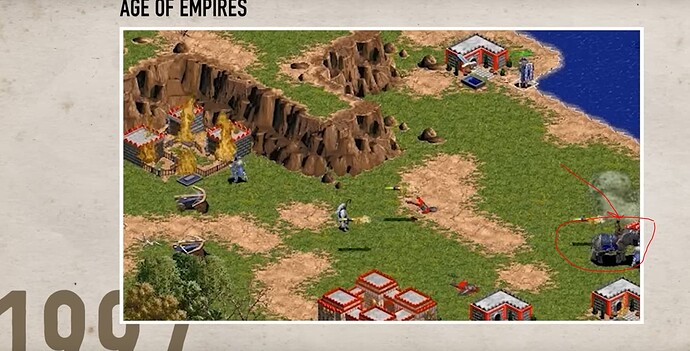 And then, at 2:11, this image shows Age of Empires 2 being released in 1999, which the narrator says, but the disk shows a Microsoft copyright from 2006.

This logic would also mean the native temple seen at 4:19 for Age of Empires 3 is out of place, as it’s introduced before the expansions. I honestly don’t know if these should be seen as errors though, as they could be seen as part of the same game.

I put this thread here as I didn’t see a “General Topic” forum, but let me know what you think of these errors in the video.

So little care. This is what happens when you don’t get anyone that knows about ALL age of empires to check the content information.

I agree there were errors and glaring omissions but there’s not much we can actually do about it besides move on and accept it as a fractured history lesson.

If we are talking glaring errors, I would submit this little chestnut. 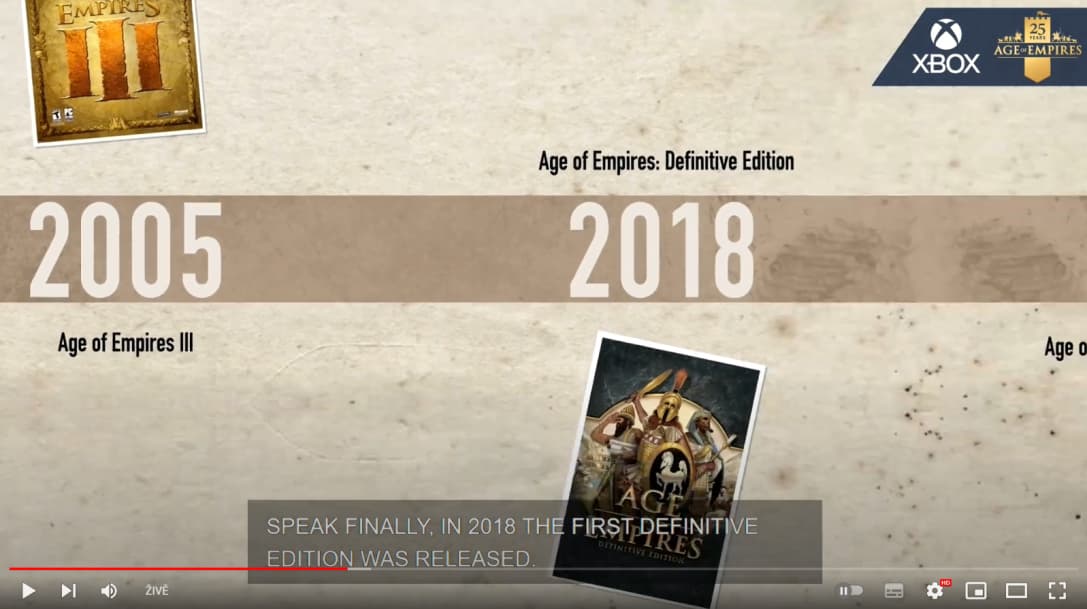 Depending on how you count, there were 11 releases in this franchise from 2005 until 2018. The video ignores the entire existence of Age of Empires Online, which was, of course, always part of the franchise.

From the Wall Street Journal, 2011: "At the Gamescon 2010 conference in Cologne, Germany, Microsoft Corp. announced […] the newest addition to their famed “Age of Empires” franchise, “Age of Empires Online.”

MS started its facebook page in 2010 specifically to hype the game. 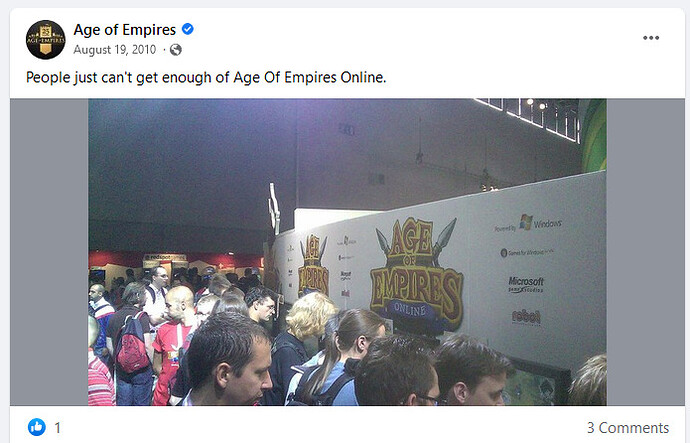 It is terribly discouraging to see the present developers just kinda pave over our own history.

Did they forgot about AoeO because they fear losing any player to a fan project?
One good search even on TrueAchievements acknowledges AoeO and Castle Siege being part of the family, as they gave you gamescore.

I have no idea why they left games out of their own history books, but AoEO players sure love this franchise. The new games in development look great, btw!

Which would make this image anachronistic

There’s no end if you want to pick at the details. The AoE1 footages are all over the place. The civ list you showed is horizontally stretched; some footages, including the one below (newly recorded, judging from the “World’s Edge” player), have angular fog-of-war corners, the telltale sign of an AoE1 installation that’s copied rather than properly installed, since the correct rounded corners only appear with the right Windows Registry entries. 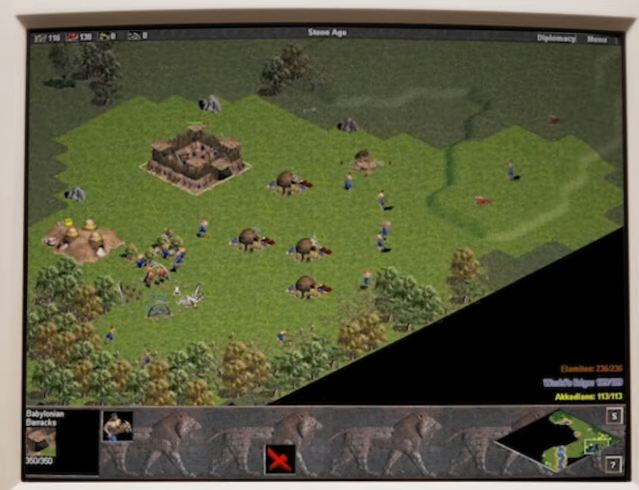 HOWEVER, and this ties into @AndyPXIII’s criticism of the erasure of AoEO, from a historian’s perspective, it’s more concerning that the video aims for cheap thrills over actually informing viewers.

For example, it gives tacit approval to the internet myth that Bill Gates revived the franchise when asked about it on Reddit - it doesn’t say that out loud, but quoted those Reddit posts in question. In place of actually honoring the people who created and revived AoE, whose labor & ingenuity made AoE come true, it perpetuates a myth just because it sounds like a cooler story. The entire video is like that.

With that said, this is pretty much what I expected from the video. It’s a small “anniversary obligation” spice for the streaming event, whipped up in a very short time frame with far fewer resources than the previous official “AoE series history” video. That video, for all its prblems, had a longer run time and interviewed a good number of developers.

It is an irony that the we always see/read posts of dev running short of resources and giving their best with the ‘‘little support’’ from above. They are the real mvp for struggling in these ‘‘trash wars’’?!

I have no idea why they left games out of their own history books, but AoEO sure players love this franchise. The new games in development look great, btw!

Most people only knows AoE by it’s common memes, they don’t know that we got through Games for Windows Live and how a naive post about Forgotten Empires modding a Genoese Xbow back in 2011 was going to be what we’re living now.
I used to play the Forgotten mod in 2013 with only the Alaric campaign and the 5 new civs. I never thought the game was officially re-released on Steam… until 2016 with a post on a gaming site telling about Rise of Rajas. I was angered that only Alaric campaign was available on that mod and where was the others supposedly promised?

Its interesting that Aoe1 classic wouldn’t even reach the doors of Steam without it’s DE and now we’re getting a dlc. I hope some devs are smart to bring GOTHS, HUNS and CELTS to this DLC haha. Just imagine them featuring with ancient civs now?

The video ignores the entire existence of Age of Empires Online, which was, of course, always part of the franchise.

I used to play the Forgotten mod in 2013 with only the Alaric campaign and the 5 new civs. I never thought the game was officially re-released on Steam… until 2016 with a post on a gaming site telling about Rise of Rajas. I was angered that only Alaric campaign was available on that mod and where was the others supposedly promised?