Do you know about, or can estimate, the sale numbers of Age of Empires 4?

I guess people have been baited to buy by the heavy marketing and public relations.
But the game itself was released unfinished (as expected) and doesn’t excel in either singleplayer or multiplayer.
I feel SC1/SC2/WC3/Age2/Command and Conquer/Dawn of War/Company of Heroes are just another level.

Is the game a top or flop?

The activity on steam is declining heavily. 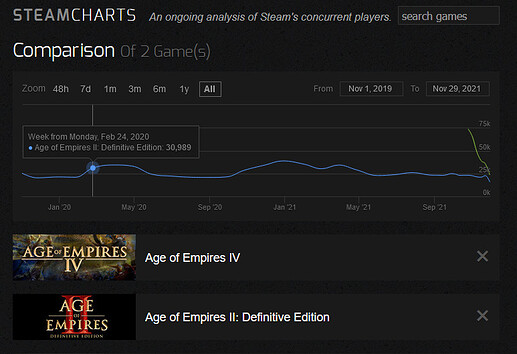 I’ve played for ~45 hours already, which makes the cost of the game barely over a dollar an hour of entertainment; significantly better than most other non-free entertainment options.

People still playing AoE2 when the game is 20 years old are already the long time userbase, AoE4 hasn’t had time to develop that yet so the comparisons aren’t really useful in any practical way.

The reality is that the game is fun and provides tons of entertainment for the cost, and is continuing to get support (something that games have not always had even with $60 price tags).

The game is a good RTS that is doing fine, top or flop are not the only choice because the world isn’t that binary.

Its free on game pass and plenty of people aren’t using Steam like they did in the past. The days of Steam charts being the gold standard are over.

I agree the game was released early, but that being said it was released in a better state than most games today. 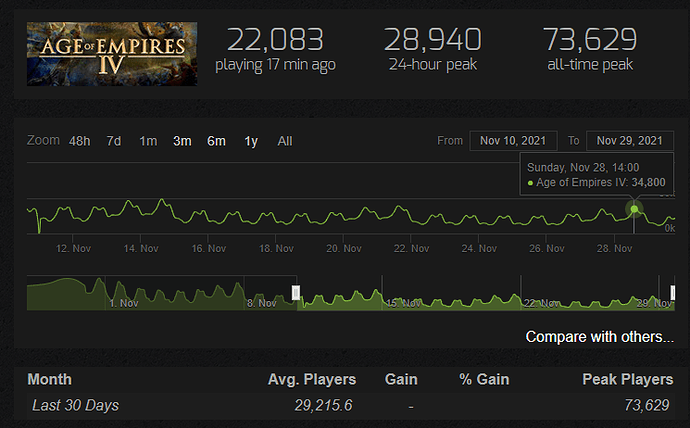 protip: no it wasnt by a long shot

If they didnt release an unfinished game it would do better.

Def not a flop but I think we already achieved the top, even the spring update will not be able to bring the hype that the release had. The truth is that we were able to outperform the previous age of empires which are old games with less accessibility but we weren’t able to outperform all RTS(at their release phase) as we should expect from the resurrection of the franchise and the heavy marketing that this game had.

I was enjoying the game but put it down over Thanksgiving to wait for the patch. I doubt I’m the only one waiting for core features and some balance/exploit items to be patched.

It’s not a flop but it isn’t all that great either. Not unexpected from Relic (which is just a shell of it’s former self before the bankruptcy) but still pretty meh. Yet acceptable levels for an RTS (‘dead genre’) year 2021.

We’ll have to see how the upcoming patches alter this trend
Seems like MS hasn’t learnt much from DE launches . A terrible launch can leave a bad impression even on a solid game .

well they ignored the aoe franchise for almost a decade. this is nothing compared to what they did to aoeo. A game which couldnt be played without a server, not even single player campaign was playable without an active connection to server. and what did they do? sold the game and in game items for real cash and then suddenly shut down the servers leaving all paying customers with nothing.

and then the fans and community came along and revived aoeo and are now running it actively.

do you know why they have mods support on priority for aoe4 spring patch? so that the community can take care of the demanding fanbase by making mods. and they can focus on their time on more important money making DLC’s and what not

I agree with you! I felt an orphan after they simply shut off the servers of AoEO without even making it at least playable after all cash we spent! I’m so proud of the entire AoE community and they did not disappoint! Project Celeste is a lot more than I would ever could have imagined!

So the sale numbers are unknown?

Seems like MS hasn’t learnt much from DE launches . A terrible launch can leave a bad impression even on a solid game .

I think it’s exactly the opposite.
The marketing channels are really good, but the game is poor compared to the resident RTS.

Keep in mind these numbers only reflect steam, and as a Microsoft game many people play free on game pass or through the microsoft app.

The marketing channels are really good

You sure about that ? Staying silent for months without releasing any footage isn’t something I’d call good marketing .

Why do u feel the marketing channels are so good? Not sure if communication is included in marketing but it’s like one of the worst I’ve ever experienced for a game.

I mean they had a lot of ads, trailers, a tournament soon after release, etc.
At least I would say the marketing wasn’t bad.
Also I don’t see why the reveal of ingame footage is needed month before release.

Marketing would be communication that comes from the Marketing department, which is going to be limited to stuff intended for building up sales; they aren’t going to be involved in any communication related to the state of the game itself.

Communication related to game update plans and whatnot would be from the development team directly, or their community team/members (if they have them).

The communication people here are generally looking for is hard because the community has a really difficult time communicating with any level of respect (for either the people making the game or other players who have differing opinions) and tend to consider anything contrary to what they want to be wrong while also somehow thinking they know best.

If I was a developer on this game, the vast majority of the posts on this forum would dissuade me from wanting to engage with the player base.

The activity on steam is declining heavily.

Your screenshot isn’t really a fair representation (other than to show the ongoing popularity of AoE III, which was never in doubt). Age IV released in October; towards the very end of your screenshot. AoE III released in 2005, the start of which isn’t on the chart.

It’s age 2 de.
What i wanted to show is the steam player numbers in the month after release.
You can compare it with other games, but it’s not beeing able to be plotted properly with this webapp.

The player numbers are going rock bottom, faster than other games after release.
That’s what i wanted to show.