Any way to beat extreme AI Goth without tower or archer rushing on Arabia ?

I play on fast speed and I can beat pretty much every other civ consistently without cheesing strategies like tower or archer rush in feudal using constant warfare with cavalry and xbows. All except the Goths. Their infantry production is just insane. I usually lose when they come with mass infantry + rams (pikes kill cavs while their rams soak up archer fire). I even pitted Goths against other AIs and they always seem to win. What gives? The only time i won was when they attacked a choke point filled with heavy scorpions behind fortified walls, but this strategy rarely works and they will usually attack from all directions. Seems like they counter everything with just just barrack units (huskarls for archers, pikes for cavalry, infantry for everything else - and in mass).

Firstly I don’t know AIs Goth spam. So this reply can be pointless.

Good scout rush can work. Magyars good for it (+1 attack for free). But I don’t know what is going on in Castle Age. In Imperial Age your Cavalry archers can kill Halbs/Champions easily because Goths lack armour. Also they deal 2 damage to Huskarls. Magyar Huszars or Hussars are good meatshiled, also they can kill Huskarls without gold cost.

Maybe Celt Siege can be good.

A good executed feudal rush will kill the Extreme AI pretty surely.
Goths are strong if they get to the infantry spam, so hit them before they reach that point. They can never get to that point, thus you never have to deal with there infantry spam.

The weakness of the AI is the early game. So hit them early. Goths are insane with the infantry spam and the AI is much better late game, which make beating them in the late game much harder.

without cheesing strategies like tower or archer rush in feudal

I don’t think archer rush in feudal would be seen as a cheese strat for Arabia? It seems legit to me to try to win against Goths with archers before they become able to make huskarls.

Any way to beat extreme AI Goth without tower or archer rushing on Arabia ?

I agree with @WoodsierCorn696, but if it goes lategame, you can win as Aztecs by going full Jaguar Warrior.

Sounds like Teutons would help here. Wall up rather early with pallisades and buildings and you can add a tower with some archers inside as defense. This will slow down your castle age a bit but help with defense against AI.

In castle age go for 3 TC boom with super cheap farms and stonewall more and more of your base, siege workshop for defensive mangonels to defend your walls from rams and whatever CA units. Fortified walls is a useful tech here.

Add a 4th TC and a castle 5 tiles behind the wall (at least 4 tiles between castle and wall) where they attack you so that in Imp Age your bombard cannons can attack the trebs from behind the walls - thats the best defense against trebs you can get especially with the 13 range castle covering your bbc from whatever ranged units might come closer to the walls to attack your bbc.

Here an image about how effective teuton castle defense is. 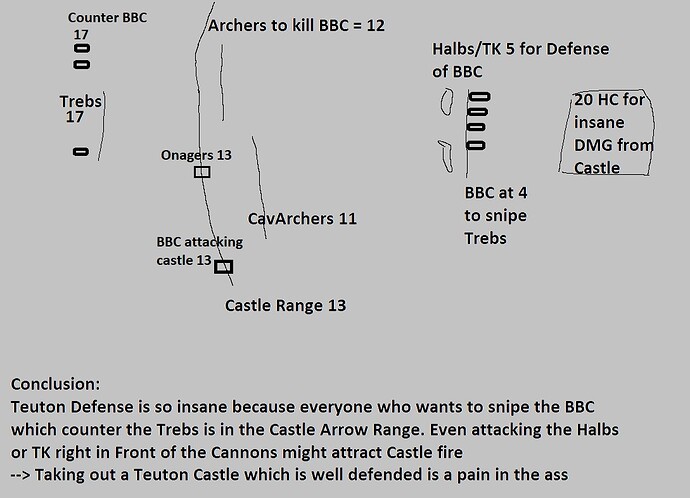 If you put archers or later hand cannoneers inside the castle it does insane damage - its like if you had almost immortal 13 range high accuracy hand cannoneers/archers as a civ with bad archers.
Mangonels and later onagers to stop the first pushes from behind and Teutonic knights hard counter infantry + rams.
You can even let your TKs out through a gate and have monks behind the wall to heal them. Teuton Halbs are also a great unit with the +2 melee armor. You also have knights at your disposal for some raids but I learned that against the AI knights without husbandry get instantly chased around by tons of pikes/halbs so I prefer the slow unstoppable late game push against the AI with teutons.

In Imperial Age the first thing you do is instantly research chemistry and make 3-4 bombard cannons as soon as possible to oneshot enemy trebs which attack your castle. You also want crenellations rather early and add some hand cannoneers to your castle.

Once you stopped a massive push you can push out on your own - you can add castles to your push with 13 range insanity (always move the 20 HC into the most forward castle) and slowly destroy them with whatever siege you like - Ironclad rams, BBC, trebs or just infantry flood. Such games can usually last around 1 hour ingame time but you have your epic battles and epic defense moments.

You can also add Paladins - yes it is expensive but I usually don’t struggle to get all the expensive upgrades since the defense is so effective that you lose only few units.
My most crazy KD in such a game (don’t remember against which civ) that way was 35 units lost and over 600 killed (AI is pretty dumb).

Also make sure to use some neutral golds/stone early - usually the AI won’t contest them for quite a while and using that gold up will help in the long run for sure.

Should be an easy win against Extreme AI goths.

Against other civs you might want another unit composition but Teutons can easily handle every AI civ with so many power units.

The reason I say an archer rush is cheese is because if you place your archer stack near the AI TC, the AI vills will just bug out and garrison in and out of the TC indefinitely, resulting in gg. It is similar to tower rush in that the vills will just walk back and forth between the “towered resource” and the TC indefinitely. Yes, when we don’t do the archer bugging, it is a legit strat.

Japanese Samurai can kill a huskarl in 3 hits. Goths really can’t do much against japanese infantry, so go with that