Extreme AI refuse to do castles in castle age

Since the latest patch the extreme AI will refuse to place a castle during castle age, the AI will still gather enough stone if it wants to make one, but it will not place it until it clicked to go Imperial. 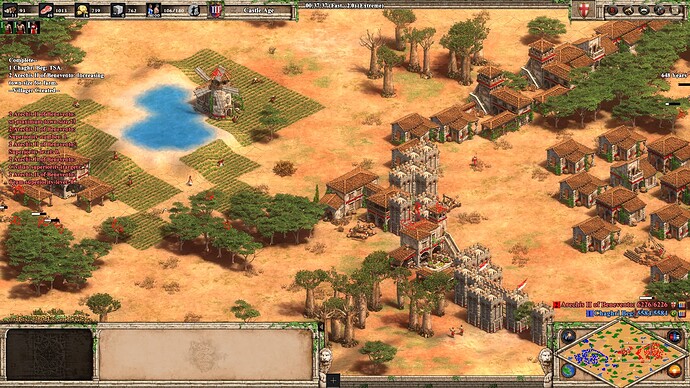 The stone is ready for the last 5 minutes, it waited until it clicked imp.

Hi @CamelTomcat3908
Thanks for your report, we are now tracking this issue

There is a bug that AI cannot use escrow resourse to build buildings.
Even though using:

I thought this might be the reason that AI refuse to place a castle.

Sorry I didn’t see you asked for a replay until now!

Let me know if I uploaded right (first time doing it) it sould be a Vietnamese vs Berbers game in Amazon Tunnel, you can see how both AIs after the fight in Castle age, collect over 650 stone but none put a castle until they click to go for Imperial age.

The rest of the game can be ignored, there is a pretty sick comeback tho!

Since I belive is the same bug, I’m uploading another game, so you can see that the AI also has problems to buy a siege workshop with escrow resources in castle age.

In the replay (it should be Malay vs Celts in arena) Malay is trying to go fast imp, but in castle age has problems to put the siege workshop until the AI has 400 wood, and when that happens it will put 2 siege workshops at the same time. I also saw this problem in some non fast-imp games, is not the biggest deal, but it will slow down the imp time a bit.

The AI will put a siege workshop in castle age without problem if it wants to just make rams/mangonels, just to try to push the opponent base or to defend, the problem is when is trying to buy it with escrow resources to go for Imp.

On a side note, the fast imp strat need to be re-done, the AI need to be forced to put university and siege workshop instead of monastery in castle age, and forced to pick Chemistry ASAP, otherwise it will never pick Chemistry fast enough, so the only civ capable of performing any kind of fast imp strat is Turks, since it has free Chemistry, Portuguese will go fast imp just to put a couple of feitorias and try to boom, and well you can see how terrible was the malay fast imp.

Thank you, i have added this replay to our internal ticket