In a team game, when the party leader selects a favorite map with the star, this map is almost never selected.

It seems that by not correctly selecting the desired map, sometimes players are disconnected from the game before the game starts.

The game should select de favourite map from the pool with the star. 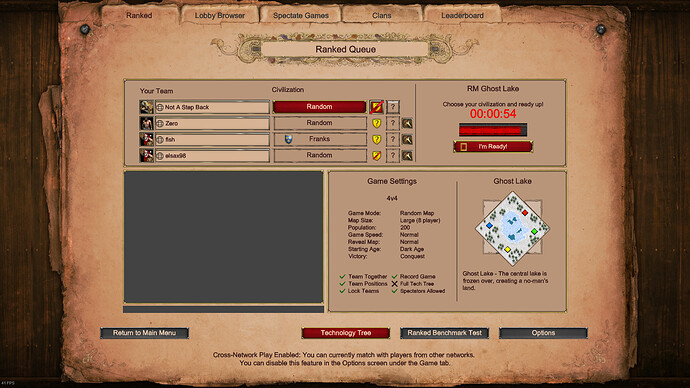 Well I think there is no issue here, but a lot of confusion on your end. So here is how that matchmaking works iirc from several discussions on this forum:

First the game searches for people that are around the same Teamgame elo like you. Then it creates a lobby and puts all 8 (or 6, or 4, depending on 2v2/3v3/4v4) players into a lobby. In that moment the game starts selecting a map. Now it is looked at which map people have banned, those get out of the equation (so up to 8 maps can be banned in total, if everyone chooses a different one), after that the preferred maps come into consideration: if there is only one map left, that is set preferred by anyone that one will be choosen, else it is either a random choice of all maps that are preferred at least once, or the one that is preferred by most of the people in the lobby (dont know this, there are several possible solutions…).

So what I think happens in your case is following: you prefer a map that is disliked by others, leading to the map being banned before it is possible to be choosen.
To get yourself a more valuable vote you should ban a map that is preferred by many players (maybe arabia or arena), this way you make sure a lot of other peoples preferred maps get out of the equation and your preferred choice is more valuable (but also migth lead to a lot of people alt+F4ing bc they only play Arabia, and instantly quit if anything else than Arabia comes in…).

Not really saying that matchmaking should work like this, there are several flaws to it.
First of all: imagine you are 3 mins into queue and realise you have not set your preferred map. You can not change it, because UI would not let you to, but it should totally be possible.
Second problem I have with this mechanism: players are less often on the map they want to play on than needed. If matchmaking would also consider in the preferred maps you migth meet other people also liking that same map, but maybe to the cost of bigger elo differences or longer waiting time. This surely needs balancing, but the current way is 100% elo taken into consideration and 0% map preferrance. This is due to that being way easier to implement (well matchmaking keeps same like before you can set preference at all, its just map selection happening AFTER matching)
Third and at least for me the biggest problem I have with the current matchmaking is the teamgame elo itself. It is hugely inflated, even corresponds more to the amount of games played that to your actual skill (that one is pretty good measured with the 1v1 elo). If you dont really get what I mean with that, check out this thread: Analyses of the ratings - Spotting the issues

I don’t know, I often have trouble trying to find me some plain old Arabia.

Yeah, because of guys like me who ban Arabia, because they do not want to play Arabia every single time