Have you ever Feitoria Turtle-ed an enemy to death as Portuguese? I just did that on Arena, 1v1, ranked.

I went for a Fast Imperial. Upon reaching the imperial age I made 5 Feitorias. And just spam walls, bombard towers, and grind your enemy into insanity? That game went on for at least 3 hours I think. By the end of it I had like 50 bombard towers, and row, upon row of walls. I kept making bombard canons to guard my walls, halbs and some organ guns. Ever time he would damage my walls, I kept making more and more walls.

He gave up I think out of sheer boredom. If I tried this ‘strategy’ on Arabia I won’t think it would work. 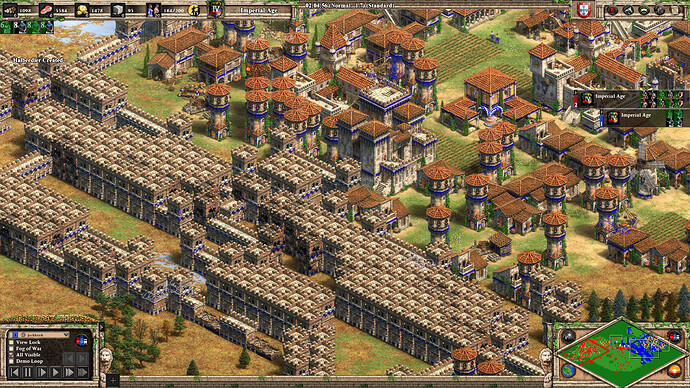 11 what the hell is that?! Legend of wall?! Man this is sick, actually if i faced something like this i will just “gg” not becasue i can’t fight, but because like what you said “3hrs game”, i will never let the game go for this it will be so boring and so annoying.

and according to some defensive strats don’t work

Out of curiousity, what civ was your opponent?

So, the player in for hell to try break my defenses you think? Unless, he rushed me, I think he could have won.

Well your BBC outrange his (same for trebuchets) and his rams are just too weak, so he had no chance to win with a frontal assault. By looking at the mini map I see there is one red spot deep in the forest (south-east), he probs tried to clear a way with an onager to attack you from behind. Too bad he gave up because it was probs the best plan possible to win in this situation.

He tried that. But he met like 20 bombard towers. Backed up with halbs and bombard canons. He quit after that. I starting making more bombard towers in reaction in that area. I heard him coming before hand.

Sounds to me like a huge elo difference. I mean what did he do while you went FI? Should’ve taken you some time to do that. He had no knights out? No monks?

I have had a few of these wins on deathmatches.

Portuguese actually quite suck since their units are weak, so naturally all you can do is bombard tower turtle. Eventually when gold runs out you can breath and then wenn wood also rubs out you can rub salt into your enemy and declare feitoria win.

Had a deatnacth against mayan and against tartar I fondly remebe which both went on basically until wood was drie.

My elo Is fairly low. But I played a lot… a lot of this game. I mosly play unranked. Often diplo, black forest, michi, or some scenarios/mods.

Were they mad at you for Feitoria spamming?

I’m also quite low, so no offense meant. I just wondered if this would work on higher elo…

I don’t think so. Unless it you got lucky. There’s some videos on youtube with guys doing this.

Yeah, to be honest that’s the best part, when they rage.

Once back in HD we played a michi deathmatch 3v3. We were losing and just defending with bombard towers but eventually the wood was nearly running compeltely out after hous of play. At that point both my teammates left. I continued alone with my still alive trade and feitorias.

After tough survival for another hours they had to yield to feitorias might, after telling me this game is bulls*** they resigned . XD

I love trash wars somehow. The endless meat grinder and stablemates and the doom of wood running low, others seem to hate this a lot. Any game shorter than an hour is a waste of time and bad game for me.

Most epic aoe2 games I had were pilgrims camping on the mini starting islands with feitorias. When the main continent is nearing compete deforestation, only then they realise the threat sitting on the islands. Its thrilling how the game then turns into full water suddenly with continental against islanders.

I host many Diplo games and michi games myself. They great hun. The scout rush game bores me.

I have played many BF No rush games in the past. If i look back, then i have no idea why i played those games. They werent really the biggest fun. I was probably afraid of rushes (drush, feudal rushes, …), because i couldnt manage everything at once. Nowadays i just cant play these boring BR No rush games anymore. I feel like they arent hosted frequently at DE anymore. I would really hate this strategy of my enemy. I already ban Arena most of the time, because it is a boring map to play for me.

Luckily not everyone thinks the same and luckily the game offers different kind of maps. So pick what you like.

I think this strategy is not gonna work past 1k-1,1k ELO, with a bit of game sense it’s pretty easy to counter

Fast Imp feitoria could still work. But not using this follow up, i would say.

This is why I ban both Arena and Black Forest. Feudal age best age. After an hour and a half of furiously attacking walls you pretty much run out of gold even at my elo (around 800), so your opponent then sat there for another hour and a half giving you every opportunity to pop out of your walls and have fun killing them. That’s a long wait for no payoff.

But well played, good for you that you made it work.