Firstly I want to say that this is by no means a way to undermine Relics efforts or so. This is simply my way of talking about some designs that I’ve been thinking about and it isn’t a thread for graphical fidelity talk.

I feel a bit that feudal probably has a few strange designs and I feel like there is something missing as well in said unit design. So I’ve made some possible alternate concepts to these designs. I’ve based the feudal “redesigns” to more of a 12-13th century look.

First of the MAA in age 2 for the english, I’ve missed the “surcoat look” for any units and the original has some weird plate features for what it should represent and it doesn’t look too different from the age 1 MAA, so this would make it more distinct.

Similar with the above, the royal knight has a 14th century appearance, but so does the veteran royal knight, being very similar. It doesn’t produce the experience of technological advancement and I’d rather use royal knight look for the french age 3 MAA

I have a few other thoughts on specifically the Feudal Age unit designs (Age2 MAA for HRE, looking at you). I believe it should be more unique and also use technological improvement as readability for gameplay along with more distinct designs.

Thats reasonable. What I hate the most right now are those brown helmets which are looks like full with rust.

I Personals dont agree.
I Like the current Design very much

Every civ has a clear Design and you can See it involving through the ages.
And it’s easy to recognize the enemys quality of Units.
(Brown/ Bronze head= feudal; silver = Castle; gold = imperial.)

A surcoat was used after the First crusades, so it’s more Castle age Style.
Feudal age in Game Is about the year 1000.

The Brown helmets suppossed to be leather and should Show the rural Style.

Which the game reflects somewhat. Castle age has a some 14th century designs in it. But the game is rather inconsistent, the early royal knight does sport a rather early 14th century look.

I’d say that the colors of the ages can be implemented in the design, with better composition.

But more opinions are welcome! 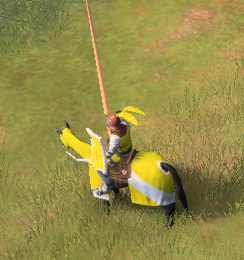 No way it can be leather, it can only be rust iron or bronze, otherwise we can’t explain the picture above.

To be honest, I was a bit disappointed with the models of heavy armor units in the early game. They’re using poor quality materials to protect the most important head. How ridiculous it is.

Chain-mail, and great helm, or some other thing but not a rusty helmet, that’s what they exactly need.