My friends and I enjoy playing team games. However, on any typical evening we spend about as much time on finding a game as actually playing a game.

Looking at today we spend just south of 1,5 hour and our total time in games actually playing (two of them) was 43 minutes. That is just a terrible ratio of play time / uptime. And it is unfortunately not an outlier. If we play for example Warcraft 3 and if we spend 90 minutes we can easily have 75 minutes in game, almost double of AoE IV.

i dunno, i play on EU region and rarely experience issues with qeue times. Yeah there is a dodge here and there, but in ranked matched rarely.
but other than that everything seems fine.

Perhaps tied to your region?

I’m EU as well and I mostly play ranked. It is sometimes really a reason to close AoE and go do something else. I don’t think the game is region bound; we meet tons of people with names that clearly originate from Asia.

An ongoing analysis of Steam's player numbers, seeing what's been played the most.

Peak can be an outlier. Steam alone has more players for AoE than W3Champions has for Warcraft III, yet this issue seems exclusive to AoE IV. So the players are not the substantial factor; I remain that is the fact that people bug-out in attempts to be pushed (or pulled) to the lobby. In the other cases people dodge in the lobby (something not possible in Warcraft as no prior lobby is shown for ranked games).

I’d search even longer if it meant I could play on region locked servers lol.

Massive influx of gamer chair users thanks to gamespass.

Not enough players means long queue time. If they widen the skill range by having noobs versus intermediates or pros, then the game is very punishing and may discourage players from queueing at all when they get rolled over.

The wait times are far too long for even non ranked team quick matches, so I don’t know what the issue is. Ranking/XP doesn’t matter there, does it?

Again, can’t join game. After about 2 minutes (where my friend is waiting for me in the game lobby) it bugs out and I get a “failed to join game” error message twice. Then get booted back to search where it is stuck at 00:00 then get booted from the team all together.

That this happens, to one of the 8th players, is actually very common. Along with dodging, this simply is the issue of a very poor time in game / time behind computer ratio : /. It has nothing to do with servers or player pool.

Edit; again. We get errors in joining twice, game bugs out and we have to reboot. Because its steam we have wait after closing. Then go online, it has to load all maps and whatnot so it also takes like half a minute before my friends see me online and can invite me. Then a game vs 2 - 3 divisions up so someone dodges and cancels the lobby, then the next game it needs 3 minutes to assign teams. Finally get in the loadings screen and 1 person is not loading thus everyone leaves at start. holy cow. This is taking serious amounts of time we spend behind our computer and not playing the game…

But this game was a success! Where are the people? lol after 1 year all my predictions came true.

I have no problem at all at finding games, in 2 minutes a find one. Maybe depend on your region or hour playtime or your skill

Again, we played one game. Second game we found in less than 2 minutes but my friend is in the game lobby, I’m still there searching for a ranked game. Then after various minutes have passed I finally get entering game.

However, this takes so long before it shows up, and succeeds, that my friend (and others) already got booted from the lobby. My friend is back in searching for ranked game, found a new lobby, but I’m still entering the first game.

I get the error messages unable to join game three times (??). It now proceeds searching for me, but my friend is still waiting in the 2nd lobby. So after various minutes I get the unable to find or join match (again) . Then we both get booted from search/lobby and our team is automatically disbanded.

The notification menu tells me I couldn’t join the group…

My friend sends me an invite but after a minute it has not arrived. So he reboots, the second he logs off, I receive the invite. He logs back in, has to load various mods and after about a minute his invite finally reached my end. I accept.

Why is it so hard to queue a game, find a lobby and start the game and then actually play the game -_-;
Again people that cannot read previous messages: these issues have nothing to do with the player pool. It is mostly poor coding. We have the people, just not the technical means to get them in the lobby.

Edit: Amazing, find another game and we, platinum players, get matched against conq 3 players. So someone decided to dodge this again. Since previous games we alt F4 as the game was struggling so much we now have a 30 minute cooldown. So in about 1,5 hours behind our computer we have been 33 minutes in a game.

Holy Christ on a horse this is bad. Friends just quit and go do something else as a result…

Try to send this on support, it’s strange. I never encounter your problem

I too have never seen these issues. I always find games within a minute or two. I am in NA though.

Do one or more of you have a bad internet connection? Or just slow computers?

Its not us, its the game (coding).

My friend and I are in the game. Now some random enemy can’t get into the lobby. 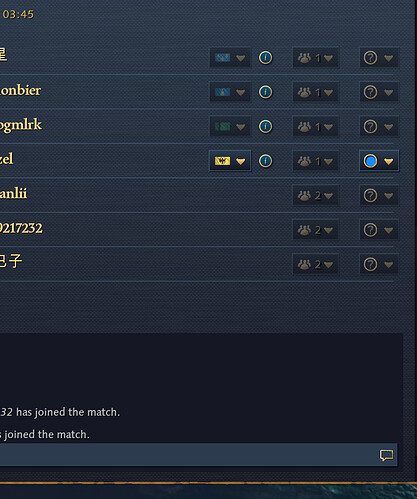 We wait various minutes and then this happens 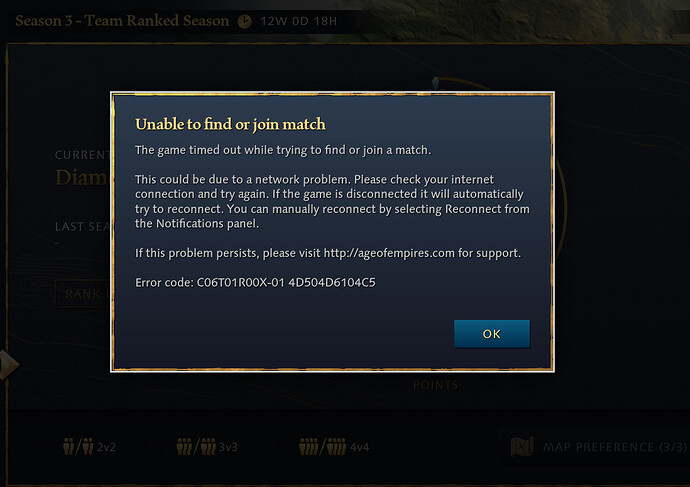 So we have to requeue, again… If it would be only me, or a specific friend, that would have this issue… sure, its us. But it happens to us and we see it happen to other players as well (as per above) 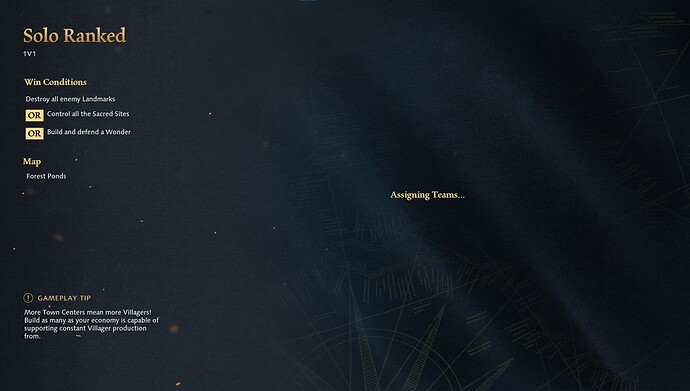 Again, we started playing 20:20 (for USA people: 8:20 pm) and we quit at 22 round (10 pm). Total time in game? 59 minutes. Giving us about 60% of our time playing the game. Horrible ratio again. And this was actually a day with very little issues. Only twice someone dodged the game and only twice that someone bugged or ALT F4 while in loading screen. Only once someone did not queue straight away and only once we had to wait 5 minutes in assigning teams.

It really should be a KPI at the devs that people who queue games in high success after an other should have at least 85% of their online time actually being in game playing the game. This is the only game I know where at peaks it hits 60% in team games…