[FIXED]Trade ships not choosing the furthest away dock

I was playing the last Gajah Mada mission and built harbours to trade with the Indians. I had 3 of them and already the slightly closer one was the one used by my trade cogs. I though it was because I used this one to build the cogs, but then I went to the 2nd green base to get control over it. As soon as I received it all my trading ships started trading with this base’s harbours, even though they were much closer to the merchant outpost than those I built myself. 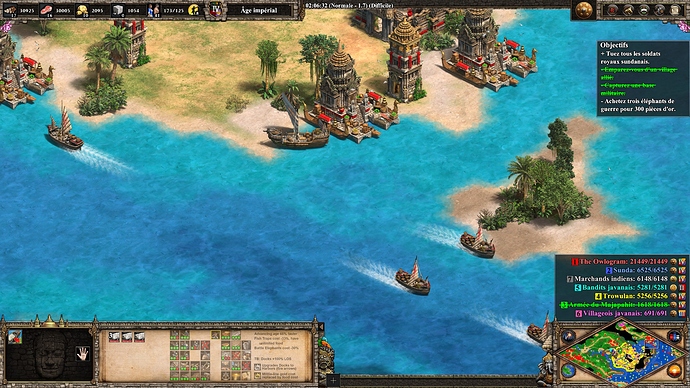 This is not an issue with DE per se, but rather trade in Age of Empires 2 in general… the trading units (carts or cogs) look for the closest building to return to which is why when starting trade you need to delete markets you built pre-trade phase.

With docks it’s more of an issue since docks exist for more than just trade. Trading with docks has always been the sub par option as a result. Your best bet is to cluster your docks at the farthest away location and in the end game fishing is either avoided altogether or done with fishing traps anyway.

As for the particular mission/scenario… well it’s only a mission, I’m sure you can work around it to complete it.

Fixing the issue altogether would probably require a major code overhaul so very unlikely to change. It’d require some mechanism to tell a trading unit which docks to return to (the farthest away is not necessarily the best).

Here’s a vid explaining how it actually works

Oh I did complete it anyway (because I had the good sense to spend everything and get the biggest elephant deathball possible before attacking 11) but I was prety sure that one of DE’s changes was that trade carts choose the best market to earn more gold. But thank you for your answer!

Welp, that’s it. The Sunda did oblige me and destroyed the wrong harbours with their ships but by that time all my trading cogs were dead. Not big problem since all their guards were dead as well 11. Thx as well!

But the big question is, whether it does actually work? Will trade units always go for farthest market/dock now, or do they still have some hidden weird logic, which makes it unfeasible to rely on this behavior and instead player should still ensure that there are no markets/docks in middle?

but why does it have to be complicated. How about, when manually pointed (either the docks or the ships) they would go to the set destination, and if not, or if the other dock is at one point destroyed etc, then simply it would THEN fall back to the farthest destination. why can’t we just have the option to manually override it for whatever strategic ends we might have in the game? to me this aspect of the game is super frustrating and it can be easily fixed i believe.