Font size in multiple pages is much too small and blurry and there are no settings to increase font size or remove the blur.

On multiple pages in the game, including the Mods page, the learn to play first campaign screen, the normal campaign screen, and in-game, much of the font is much too small and blurry. I have seen this complaint posted prior and would like to know if the developers are working to fix this as soon as possible. Attached I have a multitude of screen shots showing not only the current issues with this bugged “Definitive Edition” of Age of Empires 2, but a comparison in how the HD Edition that is six years older has much larger and clearer texts for the in-game screen, the mods page, the campaigns page etc.

I have played years worth of Age of Empires 2 on steam as well as supported the Age of Empires franchise with multiple purchases of Age of Empires and Age of Mythology with thousands of hours of total gameplay. I would like to rekindle my interest with Age of Empires 2 Definitive Edition but in its current state that’s not possible. I am not some old or visually impaired person and I had no issues with reading the text and fonts in Age of Mythology nor Age of Empires 2 HD Edition. It is strictly due to the intentionally microscopic font size and blurry font style. Please fix this immediately or else I will need to request a refund as a result of these bugs making the game unplayable.

Additionally, the light text on light background and extreme glossiness of the home screen and the game make it hard on the eyes as well as difficult to even read the version number of the game as is made evident in the 4th attached screenshot. I also have attached the settings photo to show even at the highest 125% for in-game HUD display and 80% tooltip scale the font size issues I address are not resolved nor able to be fixed in any way (1st screenshot).

I play on a 17-inch widescreen laptop with 1366 x 768 resolution and I have had no font issues in any other of my games so I know it is an issue specifically with this game’s current font.
These screenshots show the issues I have stated with way too small, blurry, and over-lighted and glossed texts and images in the new game (first 6 photos). The following 5 screenshots are to serve as a comparison by showing how much larger, clearer, and visible the text and screen pages are in the HD version of AOE2 which was created back in 2013 (11 total photos to show multiple instances of evidence and issues arisen).

Edit. This forum not only is extremely difficult to navigate to ensure that no one can truly point out the errors in this website and “customer support”, but also they prevent me from posting the 11 screenshots to show my issues. As a result I will be only posting the Mods Page screenshot because Microsoft won’t allow me to post the others that explain my dilemma in better detail. Very disappointed in this website and Age of Empires Definitive Edition thus far. Waited anxiously all summer for a dud of a game with a lackluster forum. 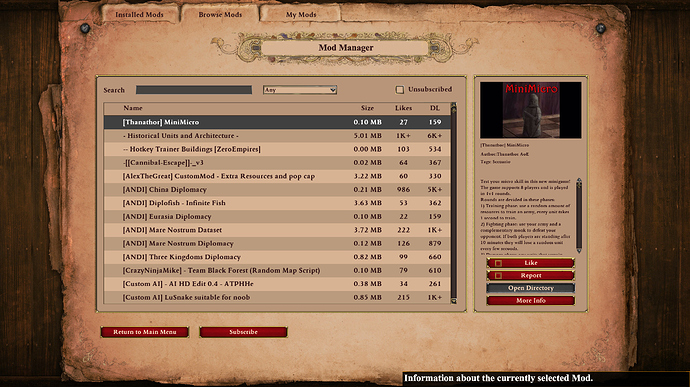 Game fonts look good to me at 1920X1080 monitor. Maybe they can be made customisable?

The developers should improve on this eventually for sure and I’m pretty sure font issues are already on the known bugs page. But that being said, your resolution is far below the minimum standard for current day PC gaming, even for lowest-end laptops, so it can hardly be called a bug. Even so, I can read the small text just fine on your screenshot, although the clarity is not great.

But that being said, your resolution is far below the minimum standard for current day PC gaming

Really? 1080 is pretty standard to me for desktop gaming Real Time Strategy